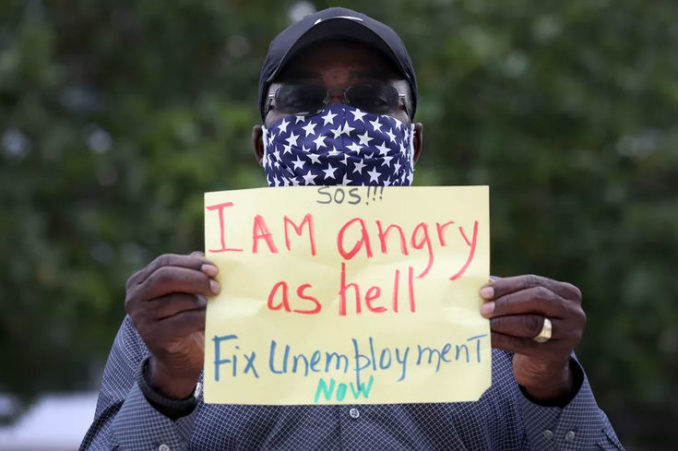 June 12 — On June 5, President Donald Trump was over the moon with joy. The numbers were “stupendous,” “AMAZING” and “INCREDIBLE.” The Dow Jones stock index was up by 829 points, or 3.2 percent, so speculators who bet right made billions.

The Department of Labor reports that more than 1.5 million U.S. workers filed for new state unemployment checks that week — bringing the total number of new claims to nearly 40 million since the crisis began.

In addition, some 700,000 workers who were self-employed or otherwise ineligible for state jobless benefits filed new claims for Pandemic Unemployment Assistance, a federal aid program. However, the PUA is scheduled to sunset at the end of July, threatening a huge income loss for tens of millions of workers.

Back in May, nonfarm payrolls actually rose by 2.5 million, when most predictions had estimated a job loss of anywhere from 3 million to 8 million. However, close to 19.5 million workers are still unemployed.

This hiring took place in the midst of the COVID pandemic. Millions of people in the streets were calling the brutal murder of a handcuffed Black man by a racist cop a social pandemic.

The official unemployment rate for May was 13.3 percent, a slight decline from April, but Black workers saw their jobless rate climb. A broader measure of the impact of unemployment, which takes into better account discouraged and part- time workers, is 21.2 percent — one out of every five U.S. workers is unemployed.

In the United States, most workers who lose their jobs also lose health insurance. The much-praised “social safety net” is in tatters.

The capitalist class in the United States now wants to force unemployed workers to take a job, any job, no matter how dangerous or low paid. This attack on workers’ incomes drags down the economy because workers won’t earn enough to buy the goods and services they would normally consume.

For those workers who should qualify for unemployment insurance (UI), the requirements vary. Income levels and time worked are usually prominent reasons given for not providing UI. Undocumented workers are almost always excluded. Even documented foreign nationals often have problems.

It can take weeks to open a UI claim. Most states have underfunded their systems and haven’t had the staff, computer capacity or phone lines to handle the COVID-19 surge that began in March.

Some jobless workers have waited 8 to 10 weeks to get the first payments on their unemployment claims. New York state supplies UI benefits on a cash card or direct deposit for workers who have a bank account that accepts such payments.

In New York City, the UI cash card can be fully used at only one Key Bank branch in lower Manhattan. People have sometimes had to travel for hours from all over the city and then wait in line for more hours to get the money to pay rent and buy food.

Without workers producing surplus value in a functioning economy, the capitalist class loses a major source of the wealth they expropriate. The Congressional Budget Office, a nonpartisan organ of the U.S. Congress, estimates that from 2020 to 2030, unemployment will cost the U.S. economy $15.7 trillion.

That spells increasing misery for millions of workers.