A protest against Philadelphia Police Terror on June 13 drew around 1,500 demonstrators to the Osage Avenue site where Philadelphia police dropped a military-grade bomb on the MOVE organization on May 13, 1985.  Eleven Black men, women and children were murdered after police and city officials ordered fire fighters to “let the fire burn.” Police shot at MOVE members who tried to escape. 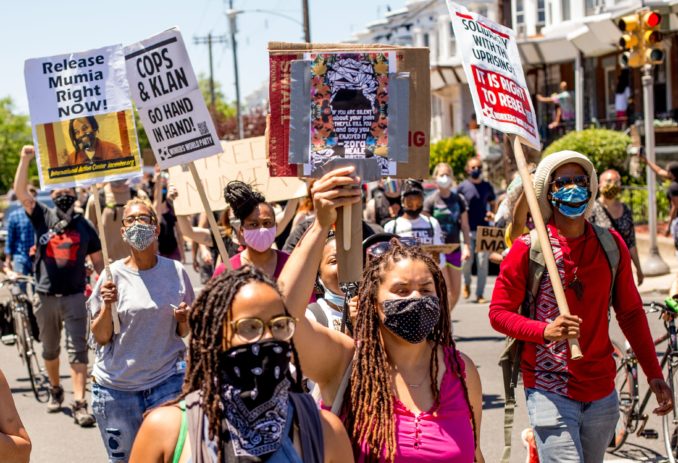 While remembering the MOVE victims, today’s protest stood in solidarity with George Floyd, Breonna Taylor, Ahmaud Arbery, Tony McDade and countless other Black people murdered by the state in recent years, and with the growing movement to defund and abolish the police

Mike Africa, whose parents, MOVE 9 members Mike Africa Sr. and Debbie Africa, spent over 40 years in prison, called out city officials who are currently offering up apologies for prior blatant acts of racism, as if they were enough to stop the growing movement.  “The politicians are dragging their feet as if nothing has happened. People want justice, and we want it now!” Africa said. “And we want Mumia free now!”

Following the rally, a spirited march made its way through predominantly Black neighborhoods in West Philadelphia. The response from community residents was electrifying. People came out on their porches to cheer and join in chants. Several joined the march.

At a closing rally at Malcolm X Park, speakers raised 13 demands from the radical Black organizing community in Philadelphia. Among the final speakers were high school students from the Philadelphia Student Union who demanded that “every single cop in schools must be out by the time schools reopen.  The $30 million used to keep police in schools should go to have safe learning environments. We want police abolition — not more reforms!”