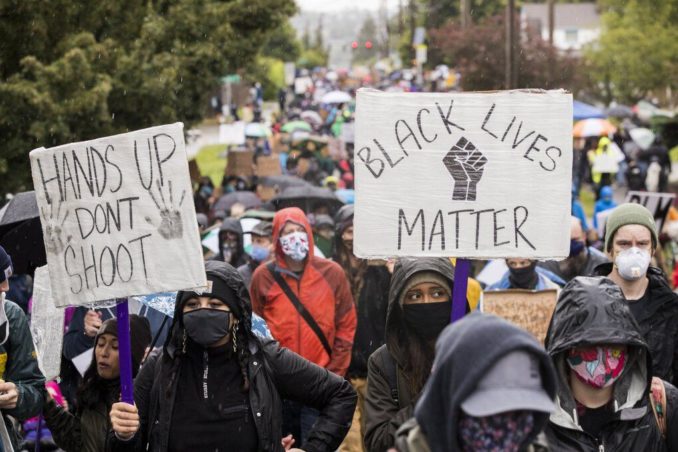 In cities and towns across Washington state, people held 38 marches and protest actions from north to south and east to west, according to BLMSKC.  Labor contingents also marched.

The march helped promote the general strike on June 12. The Boeing Company and Amazon, with tens of thousands of workers, were forced to make accommodations for workers to take the day off.  In one of the city’s sections, West Seattle/White Center, 65 businesses closed down because of the strike. (The West Seattle Blog)

One action the march encouraged is the ongoing protest and organizing at Seattle’s boarded-up East Police Precinct, which the cops were forced to evacuate on June 8.

Antiracist demonstrations went on daily for 10 days in Seattle’s East Police Precinct in the Capitol Hill neighborhood. The police were stuck in their fortress, apparently fearing some attack like the one on May 25 in Minneapolis when the police precinct burned down.

Police had to deploy in front of the precinct for most of the day, setting up barricades to block traffic.  Many mass marches originated from or arrived at the barricaded precinct.  Trapped inside the perimeter, the cops were forced to listen to the speeches and chanting of the demonstrators.

The police evacuated the precinct the night of June 8 with no place to go. Some public and private schools said that the East Precinct cops couldn’t stay on their property.

It’s clear that the Seattle city government of Mayor Jenny Durkan took the move to evacuate to moderate the angry struggle of Seattle’s oppressed working class.  When police left, however, they left the barricades, which the activist community has rearranged as the perimeter of a six-block area around the precinct, which is now called the “Capitol Hill Organizing Project.”

This blocked-off area is now an organizing center, which has already drawn angry remarks from Trump, who attacked Mayor Durkan as he has done to any politicians who advocate even the mildest concessions to the movement.

Although she has drawn this attack from Trump, Durkan is a law-and-order politician who has represented the giant monopoly Amazon and its corporate empire based in Seattle, itself notoriously racist, sexist and antilabor. Seattle police have a monster budget of $350 billion.  The Durkan regime has used police to lead sweeps and evict hundreds of homeless camps.

Durkan claims she marched in the Black Lives Matter march on June 12. Since up to half of the homeless are Black, it means the mayor is running a de facto ethnic cleansing campaign against Black people and others.