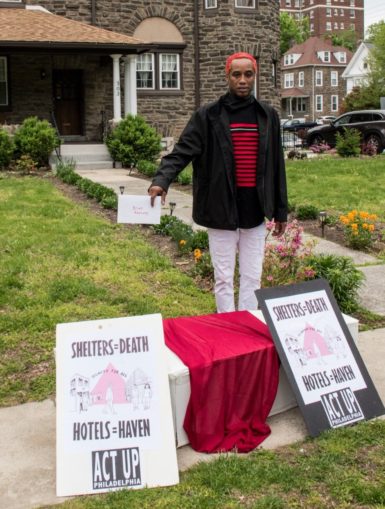 After the COVID-19 deaths of dozens of seniors at Philadelphia nursing homes and at least one homeless person in a city shelter, community activists converged on a city official’s home on May 6 to deliver a message: The city must provide safe, non congregate shelter for residents who are at high risk of contacting and dying from COVID-19!

Activists placed a white coffin covered with a red cloth on the sidewalk in front of Philadelphia Managing Director Brian Abernathy’s home in the city’s Mount Airy section. Placards carried by protesters and placed next to the coffin proclaimed: “Shelters = Death, Hotels = Haven.”

ACT-UP speaker Jamaal Henderson explained that Philadelphia has resources at its disposal but is systematically refusing to use them to help people who are unsheltered or living in congregate shelters, returning from incarceration or stuck in nursing homes. Philadelphia’s slow action has already resulted in clusters of illness that put residents at risk, burden our health care system and contribute to the spread of COVID-19.

This pandemic is disproportionately killing poor, Black and Brown people. The disease is now exacerbating the conditions of poverty, racism and lack of health care, spreading mostly in situations that poor Philadelphians find unable to escape. The protest put a spotlight on Philadelphia’s slow, uncoordinated and undersized response to the dire needs caused by both the pandemic and the high level of poverty in this city.

On March 23, Mayor Jim Kenney issued a stay-at-home order in Philadelphia. Two weeks later on April 6, the city opened a hotel to quarantine people who were homeless and tested positive or had symptoms and were awaiting test results. Now three weeks later, the designated quarantine hotel is still partly empty, underused despite the large number of community residents needing a safe place to self-isolate.

When an activist tried to bring the envelope containing their demands to Abernathy’s front door, cops prevented the delivery. Speakers explained that they were at his home because the official has refused to meet with them in his office. They vowed to return in larger numbers next time.

The ad hoc coalition’s demands include: Federal Emergency Management Agency public assistance funding for non congregate shelter as required; and an immediate inventory of all publicly owned properties, including public university dorms, the Pennsylvania Convention Center, museums, libraries, public housing, city-owned vacant properties, and more, to determine which can be used as non congregate housing and which can be used as quarantine or recovery beds for people who have tested positive.

In addition the call is for immediately moving all residents of congregate homeless shelters into hotel rooms or dormitories; and for reaching out to all unsheltered Philadelphians and providing hotel or dormitory rooms to all residents returning from jails/prisons.

Other demands addressed the rising death count in nursing homes, calling for immediate provision of accessible hotel rooms or dormitory rooms to residents who are living in nursing homes but could live independently with accessible housing. They also addressed the need to develop a harm-reduction plan to move people with mental illness and/or drug use into non congregate settings with adequate support from well-equipped outreach teams.

Other demands involving housing called for shifting as many housing resources as possible toward rental assistance and providing housing to people with little or no income in preparation of the ongoing housing and eviction crisis. City officials were urged to resist austerity budgeting and plan now to provide housing for all homeless and at-risk households for at least the next 24 months.