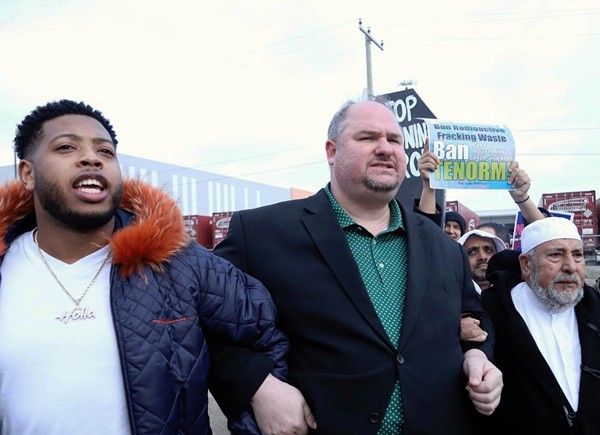 Michigan State Representatives Jewell Jones and Isaac Robinson, co-sponsors of a bill for a 90-day moratorium on foreclosures, evictions and utility shutoffs. Robinson died March 29 of suspected COVID-19. Here they are protesting a polluting company US Ecology in Detroit.

May 4 — Coronavirus, COVID-19, the pandemic — or as they say in the Motor City “the ‘rona” — by any name this disease  has been particularly devastating to Black-majority cities. Detroit, 80 percent Black and 10 percent Latinx, has been particularly hard hit. The three counties that comprise Metro Detroit — Wayne (which includes Detroit), Macomb and Oakland — have had at least 3,300 virus-related deaths as of May 4.

The entire state of Michigan has had 4,000 deaths, making it third in the country after New York and New Jersey. Outside of Metro Detroit, only one other county, Genesee, which includes Flint, has had over 100 deaths. While the state’s population is 14 percent African American, 41 percent of those who have died from COVID-19 statewide are African American.

A Facebook group, Detroit COVID-19 Memorial, puts a human face on the statistics. They include nurses, doctors, union leaders, clergy, youth coaches and others loved by the community they serve.

“As this crisis expands, we must take swift action to protect our senior citizen population and those economically impacted,” said State Representative Isaac Robinson. “We must defend the public health of all people including our most vulnerable residents and low-income families. The working families and students in my district already slammed by excessive car insurance costs are being devastated by the impact of this pandemic.” (Voice of Detroit, March 31)

Robinson, of Hamtramck, who also represented Detroit, died March 29 at age 44 of suspected COVID-19 complications. He had just introduced legislation for a 90-day moratorium on foreclosures, evictions and utility shutoffs.

Many families have lost more than one member. The youngest to die so far is five-year-old Skylar Harris. Detroit residents held a car caravan in solidarity with her family.

Hospitals and health care workers are overwhelmed by this tragic situation.

The reasons for so many deaths in Detroit are racism and poverty. Compounding the prime causes is the high number of households which had their water shut off. These ongoing shutoffs were denounced in 2014 by two United Nations rapporteurs as “contrary to human rights.” (UN News, Oct. 20, 2014)

How can one stay hydrated or engage in “frequent hand washing,” as recommended by medical experts, without running water?

Moreover, Detroiters are more likely to die from the virus because of the higher incidence of preexisting conditions, including asthma, obesity, kidney disease and heart conditions, compared to the rest of Michigan. (Michigan Behavioral Risk Factor Surveillance System, conducted by state health officials, 2015-17)

“Rates of asthma, diabetes and obesity are higher among African Americans,” explains Dr. Velda Crowder, chair of the health committee for the Washington, D.C.-based Black Women for Positive Change. “Those chronic conditions increase the likeliness of serious illness from COVID-19, even among young people, said Crowder, an emergency physician.” (Detroit News, March 26)

Also contributing to the spread of the virus are the unsafe working conditions inside the auto plants where many Detroiters work. After workers protested the lack of social distancing and proper sanitation, Ford, General Motors and Fiat Chrysler Automobiles closed the plants temporarily. But many autoworkers were already infected, along with people they came in contact with.

Close to 30 members of the United Auto Workers have died, including at least two members of this writer’s union, UAW Local 869. The Detroit Three are pushing to reopen the plants and restart production, supposedly with new safety measures in place — but workers are dubious, understandably so

African Americans are disproportionately impacted by the virus in yet another way: More than half of all state prisoners are African American. Half of those tested in Michigan’s prison system have tested positive.

Capitalism behind the destruction

The racist, anti-working-class attacks on Detroit did not begin with the coronavirus. Detroit’s pivotal role in the Civil Rights and later the Black Liberation movement, and much earlier the U.S. labor movement, earned it the enmity of the ruling class. Auto plant closings, a trend that began in the 1950s and accelerated in the 1970s with the dismantling of Chrysler’s Dodge Main complex, have cost the city tens of thousands of jobs — and eroded its tax base.

Thanks to union wages in the auto industry, Detroit at one time had the highest rate of homeownership of any major U.S. city. But as jobs moved to the suburbs or out of Michigan altogether, or were eliminated by automation, many Black Detroiters saw their incomes drop. Now, because of racist predatory lending, Detroit has had the highest foreclosure rate since the 2008 recession.

Bloated interest payments to Wall Street banks undermined Detroit’s financial solvency, leading to the largest municipal bankruptcy in U.S. history in 2013. What followed was a mass looting of city assets, slashing of union pensions and other austerity measures that the banks mandated — treating Detroit the same way they treat countries in the global South. This was accomplished via the appointment by then Gov. Rick Snyder of a dictator known as an “emergency manager” — Kevyn Orr of the Jones Day corporate law firm.

While the city is not currently under an appointed fiscal dictator, Detroit’s white mayor, Mike Duggan, is a loyal corporate servant.

The heavily armed, well-funded fascists who invaded the Michigan Statehouse, pushing to get workers back to work, are happy to watch the death toll climb. While the capitalist class subjects Black cities to the ravages of COVID-19, a timely demand would be “Reparations for Detroit!”

Grevatt lived and worked in Metro Detroit from 2010 to 2019 and serves on the executive board of UAW Local 869.