The Palestine Solidarity Committee won a legal victory for the Boycott, Divestment and Sanctions campaign in Britain when the country’s highest court issued a landmark ruling that struck a blow against the Whitehall government on April 29. Supreme Court judges repudiated regulations that prohibited local governments from making “ethical” pension fund divestment decisions contrary to official policies. 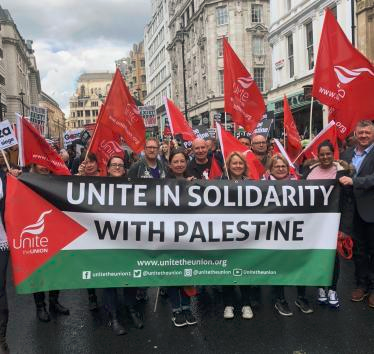 Members of Unite the Union, a British and Irish labor union, show support for the Palestinian people.

In this case, the top court ruled that local councils had a right to divest retirement plans from companies that are complicit in Israeli occupation of Palestinian lands — and also divest from Britain’s arms industry. This decision cannot be appealed.

The PSC began this legal fight in 2017 to challenge regulations issued by the British government a year earlier. Such regulations barred local councils from divesting pension plans from other countries and from Britain’s arms manufacturers.

One provision specifically prohibited divesting from businesses that traded in goods produced in the illegally occupied Palestinian territories. This provision’s intended aim was to criminalize support for the BDS campaign and intimidate Palestinian activists and their allies. British Conservatives allied with Israel promoted the anti-BDS policy. They use every avenue to try to suppress the burgeoning global movement in support of Palestinian rights. But the new ruling shows they can’t stop it!

The Israeli government and its allies in Europe and the U.S. have promoted anti-BDS policies and legislation. The court ruling is a significant legal victory against this effort to suppress pro-Palestinian activism and speech.

There have been some other gains in Europe. The BDS movement website reported on Jan. 13 that five United Nations rapporteurs criticized the German government in October 2019 for condemning the BDS campaign based on the lie that it is “anti-Semitic.”

Spurred on by this criticism, some German courts have ruled that denying Palestinian solidarity groups from public spaces violated free speech and assembly rights. There have been some other legal advances for BDS, but this campaign is still the focus of attack in many countries.

There are danger signals ahead in Britain. Conservative Prime Minister Boris Johnson declared in December that he would introduce a law banning public bodies from working with anyone involved in the BDS campaign. Israel and its imperialist allies refuse to accept defeat.

In the U.S., Israel succeeded in lining up officials in 28 states to enact antiboycott laws to suppress solidarity with Palestine. These laws aim especially at college campuses where support for the besieged peoples of Gaza and the West Bank runs high. Federal courts stopped Arizona, Kansas and Texas from enforcing anti-BDS laws. These rulings are a result of struggles on the ground.

The worldwide BDS campaign for freedom, justice and equality is modeled on the anti-apartheid movement in South Africa. It aims to pressure Israel to end its 53-year military occupation and oppression of the Palestinian people.

Even during the coronavirus pandemic, this compelling movement is growing. U.S.-backed Israeli repression of the Palestinian people will not stop their struggle or quell the sympathy and solidarity of the global multinational working-class and anti-imperialist forces.