April 16 — Bulletin: A Texas appeals court ruled April 13 to accept an emergency application asking the U.S. Supreme Court to restore a district court’s temporary restraining order that would allow patients access to medication abortions during the pandemic. The appeals court asked if a medication abortion was a “procedure.” Plaintiffs explained medication abortion consists of two pills administered without personal protective equipment and is not a procedure. Medication abortions and surgical procedures are now available before the gestational age of a pregnancy exceeds the state’s legal limit of April 22, the day after Gov. Abbott’s COVID‑19 order expires. Litigation against ban continues.

April 7 — The overwhelming majority of people in the U.S. are doing everything in their power to survive the COVID-19 pandemic, which is both a public health crisis and an economic disaster of worldwide proportions.

But women of childbearing age, 15 to 44, in six conservative states led by politically ambitious, anti-abortion officials — Indiana, Iowa, Mississippi, Ohio, Oklahoma and Texas — face an additional threat. Those states are intent on banning all abortions for the duration of the pandemic. 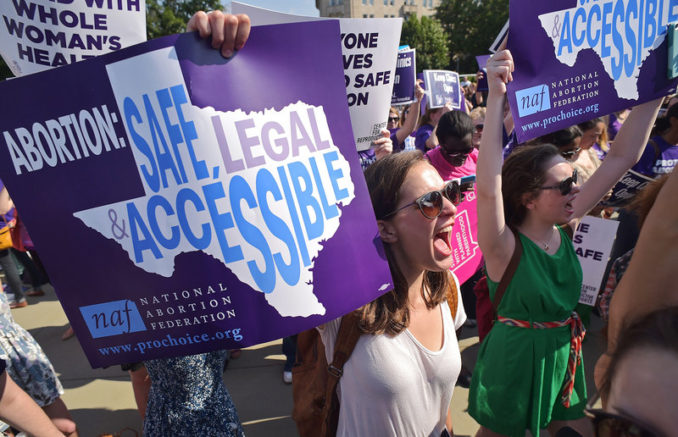 The battle for the reproductive rights in Texas has raged for decades, here at a 2016 protest.

At present only the Texas ban has gone into effect due to a ruling by the 5th U.S. Circuit Court of Appeals on March 31. There is a proposed end date of April 21, but it can be extended at the governor’s whim.

Judges in other states have issued restraining orders on the ban, thanks to such reproductive rights legal defenders as the Center for Reproductive Rights, the American Civil Liberties Union and the Planned Parenthood Federation.

On April 6, Oklahoma District Judge Charles Goodwin wrote that Oklahoma “acted in an ‘unreasonable,’ ‘arbitrary,’ and ‘oppressive’ way — and imposed an ‘undue burden’ on abortion access — by imposing requirements that effectively deny a right of access to abortion.” (CNN)

What is the pressing argument for such bans? That the use of personal protective equipment for abortions takes valuable resources away from frontline health care providers during the epidemic. And that, since abortions are considered “elective” procedures, they belong in the category of “nonessential” surgery.

Not only is that reasoning false, but the Texas ban includes medical abortions, which do not require any surgical intervention. Rather the patient is instructed to take two well-spaced pills in the privacy of their home. This restriction exposes the ban as obviously deceptive, malicious and criminal. (See “For gender-oppressed people: COVID-19 complicates health care” in April 2 WW, which discusses telemedicine during the pandemic.)

A March 18 joint statement by major national medical organizations, including the American College of Obstetricians and Gynecologists and the American Board of Obstetrics & Gynecology, asserted: “Abortion is an essential component of comprehensive health care.” Stressing that it is a time-sensitive service, the statement concluded: “The consequences of being unable to obtain an abortion profoundly impact a person’s life, health, and well-being.”

“Anyone who believes in facts and evidence-based public health will witness the absurdity and cynicism of these arguments with alarm because all pregnancy-related health care — whether it’s ensuring healthy pregnancies and safe births, preventing pregnancies, or ending pregnancies — is by its very nature time-sensitive and essential care.” wrote Dr. Herminia Palacio, president and CEO of the Guttmacher Institute, a primary resource of reproductive science, on March 30.

She concluded: “In recent years, we have witnessed a renewed, systematic, and coordinated effort by anti-abortion advocates to dismantle abortion access and otherwise undermine reproductive health and rights. These ideologues have found strong allies in the White House, many state governments, and an increasingly conservative judiciary.”

Multiplying the stressful effects of the ban in Texas is mass unemployment. Women may try risky measures by taking matters in their own hands if they do not have the cash to travel hundreds of miles out of state to get a legal abortion. These can cost hundred of dollars, in addition to other related expenses. Statistics show that women in Texas already have a higher rate of attempted self-abortions than the national average.

While noting that the Texas ban is temporary, Marwadi warned: “But our civil liberties are most fragile during times of fear and crisis; rights that are lost are not easily won back. It’s not just our physical health that we need to worry about during this pandemic. … A small minority of zealots will do everything they can to use this crisis to eradicate the right to an abortion in America.”

A legal eagle at Slate, Mark Joseph Stern, pointed out in a March 31 article: “For several years, the 5th Circuit has been pioneering the jurisprudence of Trumpism, which includes a fervent desire to end abortion. … The court has already defied Supreme Court precedent to uphold one blatantly unconstitutional abortion restriction.” [Louisiana law now before the court. See Feb. 26 WW article.] But Stern cautions, “Only the Supreme Court may restrict the breadth of its rulings. … COVID‑19 gives them a perfect pretense to erode [legal abortion].”

Longtime prisoner activist in Texas, Gloria Rubac told Workers World about Texas Gov. Greg Abbott: “Denial of abortions is so wrong. Abortions are an essential healthcare procedure. Delaying an abortion is denying a woman the decision to control her own body. I really take exception to the Texas governor saying religious services are an essential business but abortions are not. What a piece of misogynist crap!”