On a good day, most of the 5,000 prisons and jails in the U.S. are filthy hellholes. Medical care is seriously lacking and can be costly. Racism is ingrained in these institutions, and violence is often the order of the day.

Right now, prisoners are terrified that as the COVID-19 virus spreads, their sentences will turn into death sentences. The majority of those in jail have not even been tried or sentenced and by law are presumed innocent.

It is not a question of “if” but “when” the virus will spread through the 5,000 jails and prisons in the U.S. Dozens of prisoners are already known to have the virus.  Some prisoners have died, and the numbers are predicted to rise exponentially. Prisoners are angry and are fighting for their very lives. Their families, supporters and activists are fighting for their release.

After reports that prisoners in Texas were going days in the dark with no electricity, one prisoner sent out a video of fires set to protest the lack of electricity. Prisoners often set fires or flood the runs to get the attention of officers. Flooding the runs means the sink in the cell is stopped up, causing a flood of water on the cell floor and out onto the walkway (the run). 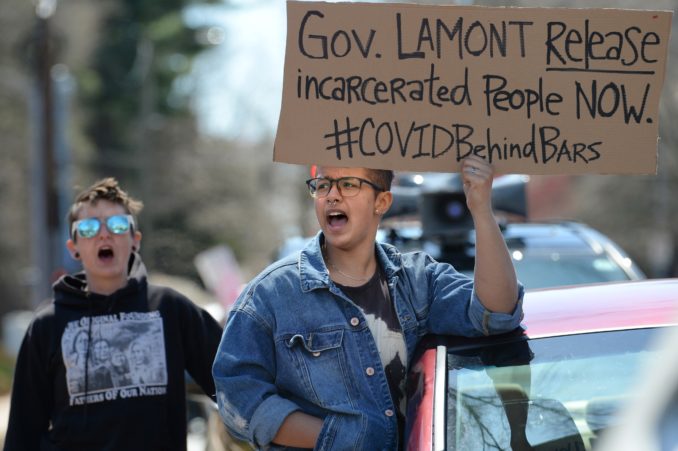 Kris Wraight (left) and Eliza Brown, (right) both of New London, chant, “Gov. Lamont! Free them all!” while participating in an in-car protest staged in front of the governor’s mansion Monday calling on Gov. Ned Lamont to release prisoners who are under threat from the COVID-19 outbreak. They were protesting on behalf of the Katal Center for Health, Equality and Justice, a justice reform group. About 30 cars formed a long line in front of the mansion blowing their horns and chanting during the 45-minute protest.

The prisoner who narrated the video said, “It’s a nonviolent protest going on right now, because the officers, in the middle of the coronavirus, have refused us electricity — no showers or anything.”  He texted the video to Keri Blakinger, a progressive reporter who used to cover the prison beat for the Houston Chronicle and is now working with The Marshall Project, a nonprofit newsroom covering the U.S. criminal justice system. Blakinger tweeted, “This is Texas, and it’s hot, and the prisoners need their fans to be running.”

Texas death row has apparently made a few changes in the normal routine. A man on death row wrote to Blakinger saying that officials took away the basketballs. He said, “They still use the same cuffs on everyone without disinfecting them, but they took away the balls even though we could only play alone anyway.”

Blakinger tweeted, “It all feels somewhat apocalyptic, when even the guys living in solitary confinement, as they wait for the state to execute them, are scared of dying from this pandemic.”

The warden of the South Dakota Women’s Prison in Pierre resigned last week, a day after nine prisoners (including at least six Indigenous prisoners) walked away from the prison’s minimum-security unit, and the state announced a woman from that unit tested positive for COVID-19. (tinyurl.com/ttkyn6z)In the Etowah County Jail in Alabama, men apparently threatened to kill themselves because they’d been housed with people they believed had the virus.

At the Wallace Pack, Texas prison, two older prisoners, 69-year-old Laddy Valentine and 73-year-old Richard King, are suing the state’s prison system for its handling of the coronavirus pandemic. The lawsuit, filed March 30, argues that the Texas Department of Criminal Justice is failing to protect prisoners at the Pack Unit, a geriatric prison near College Station, from the potentially fatal virus.

The virus crisis is also affecting those who work in prisons and jails. The Washington, D.C., chapter of the Fraternal Order of Police just announced that officers would no longer make security rounds, citing concerns about a lack of testing and personal protective equipment.

Kenneth Foster, a prisoner whose death sentence was commuted to life just hours before his scheduled execution in 2007, wrote, “What I’m shocked about is the fact TDC [Texas Department of Corrections] is doing chains. WTF? In the middle of a pandemic! And guess what? They’re taking no real precautions. They are not cleansing the cells or buses that transfer inmates are in. They’re acting like it’s not happening.” (Chains are the buses that transport prisoners.) Meanwhile, Texas prison officials say no prisoners are being put on buses and transferred anywhere.

Activists and even some public officials are proposing a different solution: large-scale releases. In Iran, officials approved the temporary release of more than 54,000 prisoners in an effort to combat the spread of the new virus.

In Houston, County Judge Lina Hidalgo had approved the release of just 1,000 of the county’s 9,000 prisoners when a judge ruled that it would be illegal.

Prisons are concentration camps for the poor and oppressed. People who are so disenfranchised and beaten down by this system commit crimes, many of them horrible, due to racism, frustration, poverty — and being forced out of, or never allowed into, mainstream society. Children as young as eight and in third grade are already tagged to follow the school-to-prison pipeline.

It is up to all of us with a revolutionary consciousness to tear down the prison walls and build a society that serves all the people with justice and dignity.