The political strike against the French government’s regressive pension plan to raise the retirement age entered its sixth week on Jan. 16. While a significant number of striking railroad and Paris subway workers have been forced back to work by financial pressures, strikes have now closed most of the major French ports and many of France’s most popular tourist sites. 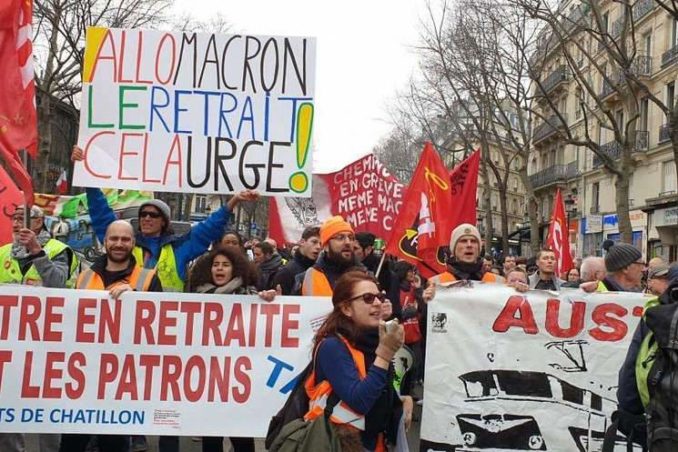 The SNCF, the government-owned railroad company, estimated it has lost over 1 billion euros (around $1.1 billion). The Paris Opera, a major tourist draw, has lost over 80 million euros. Thousands of freight cars are piled up in railroad yards because freight couldn’t move during the SNCF strike.

Le Havre, one of the ports being struck, handles around 5,000 truckloads a day. All of them were being blocked.

The Louvre in Paris is the world’s largest art museum, which received 9.6 million visitors in 2019. On Jan. 17, strikers blocked all five entrances to the museum for the first time. Thousands of tourists, both French and foreign, some with timed tickets for the Leonardo da Vinci exhibit, were kept out.

Hotels and restaurants, which draw a significant amount of business during the year-end holidays, reported a dismal lack of customers.

The French government does not appear to have released its estimate of how much this strike has cost the French economy. Instead, Prime Minister Édouard Philippe has emphasized his government’s determination to implement its pension plan.

President Emmanuel Macron and his spouse went to the theater on Jan. 17. Macron’s presence was recognized by a journalist, who tweeted out a call to protest. About 100 people gathered and attempted to get into the theater, but were pushed out by cops who rushed to protect the president. Macron waited until the play was finished to leave — to boos and catcalls.

The journalist Taha Bouhafs, who had been a parliamentary candidate for France Unbowed (France insoumise), was arrested for organizing this disturbance, but was released after being held overnight.

Strikers, carrying flags of the militant union federations CGT and SUD, occupied the main office of the reformist union CFDT on Jan. 17. They came, according to spokesperson Anasse Kazib for the online site revolutionpermanente.fr, to protest the lack of support by the CFDT central leadership for CFDT railroad workers and the fact that the CFDT has not used its 126-million-euro strike fund. They wanted to make clear that the CFDT central leadership was not speaking for its members.

The leaders of the CGT and SUD emphasized that they did not support their occupation, although they strongly disagree with the strategy of the CFDT.

The orchestra of the Paris Opera, which has been striking along with the ballet dancers since Dec. 5, held a free, public performance Jan. 17 in front of the opera hall, which drew around 15,000 people.

The Yellow Vest protest movement held its 52nd protest in Paris Jan. 18, which drew thousands of protesters. It was so dispersed and broken up by tear gas and baton charges from the cops that the number of protesters was not available. Dozens of people were arrested in scuffles that went on from early afternoon to well after nightfall. Some videos of police brutality against the Yellow Vests were spread widely on social media.

Videos on the French television chain France 2 show striking dockers welding shut the gates to the loading areas on the docks and then welding braces to the gates to make it even more difficult to force them open.

Lawyers throughout France, who have a special retirement system funded by contributions from active lawyers, which has a hefty surplus, have been protesting a government takeover of their funds. They are throwing their robes into piles and not participating in normal activities.

Doctors in the underfunded public hospital system have been fully providing care to their patients, but not signing off on bills going to insurance companies.

While the number of workers participating in the strike and the national protests has been declining, the spirit and resolve of those still active have increased. Even when UNSA, the union representing most Parisian subway workers, announced that service to most of the subway would be restored on Jan. 20, it stressed that it was not abandoning the struggle and would fully participate in the next national day of action called for Jan. 24.

The French government is betting that it can outlast the workers and force them back. But it is meeting stubborn resistance.