The Hill, a newspaper that chronicles the role of Congress in backing U.S. imperialism, reported Jan. 20 that Secretary of Defense Mark Esper has likely decided to withdraw U.S. troops from former French colonies in Africa. The withdrawals “could include abandoning a recently built $110 million drone base in Niger and ending assistance to French forces fighting militants in Mali, Niger and Burkina Faso.” The U.S. currently has about 800 soldiers in West Africa. 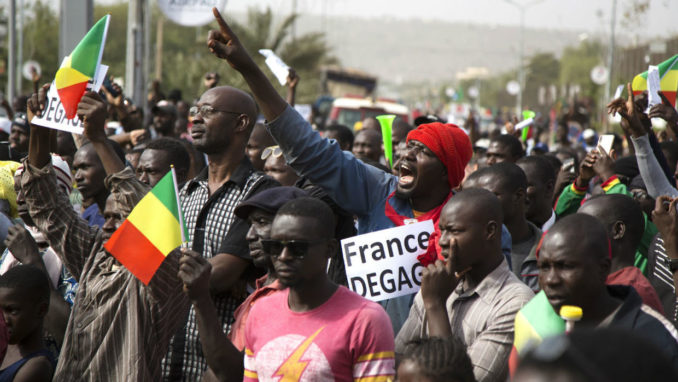 Protest against the French military presence in Bamako, Mali.

This past summer, the U.S. imposed financial sanctions on some political leaders in Mali. While Washington claims it is only targeting individuals, any entity having economic relations with these individuals can also be sanctioned, which leads to a chain reaction.

France is an imperialist country and the former colonial overlord in the Western Sahel, which includes Mali, Niger and Burkina Faso, as well as Chad and Mauritania. The Sahel is a vast, arid area, south of the Sahara Desert, stretching from the Atlantic Ocean to parts of Sudan. The region where the borders of Mali, Niger and Burkina Faso meet, however, is fairly well-populated and fertile, and has active insurgent groups that the French army calls “jihadist.”

In 2012 – after Libyan leader Moammar Gadhafi had been deposed and murdered a year earlier through the intervention of NATO countries, including France – vast stockpiles of modern arms, along with trained soldiers, became available throughout the Sahel. A loose coalition of “jihadist” groups and forces from an ethnic group in northern Mali, the Tuareg, used these arms to begin taking over cities and towns in Mali. The French Army intervened and reestablished a regime that was under their control.

France currently has 4,500 troops in the Sahel. This military presence has been the target of large demonstrations in Bamako, Mali’s capital; people in Niger have also protested. The French government did not get the political support it was hoping for at the meeting held in Pau. It then announced it was sending an additional force of 220 soldiers to the Sahel.

Without the U.S. providing very significant support, and with popular opposition to its presence, France is going to have problems maintaining the troops it needs to impose its control on the Western Sahel.