More than 300 Philadelphia police have been exposed as strident racists, based on social media posts revealed by Plain View Project, which examined thousands of posts across Facebook, Twitter and other social media platforms. Across the U.S., the project identified problematic postings by about 2,900 current and 600 retired officers. 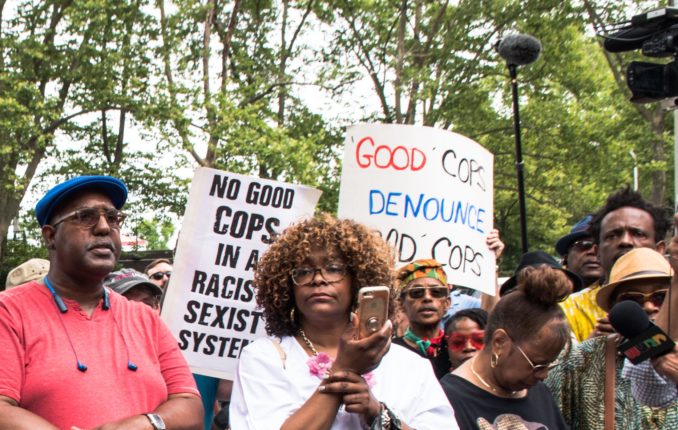 The Black community newspaper Philadelphia Tribune reported June 6: “In Philadelphia, law officers referred to minorities as animals, cheered vigilante justice and shared pictures that were anti-Islam.  In other posts, officers appeared to joke about raping and beating women. Officers apparently frequently referred to Black people as ‘animals’ and said they ‘should be taken out back and put down’ or locked in cages. Officers appeared to advocate shooting suspects on sight and using cars to drive over protesters. Some officers also appeared to praise white supremacists.”

Police Commissioner Richard Ross alluded to the scandal in an address to Police Academy graduates earlier this month. He asked officers to try not to “embarrass” or “upset” the “brand” that the police force intends to foster. Notably, he did not decry racism, sexism, homo- and transphobia. In a June 1 interview with the Philadelphia Inquirer, Ross reiterated his “dismay” that the officers were not doing a good job of “representing” the department.

PVP founder Emily Baker-White said they found “posts that seemed to endorse violence by officers or members of the public, posts that appeared to show bias against minority groups, and dehumanizing language that referred to protesters or people of color as ‘animals’ or ‘savages.’” (Washington Post, June 4)

The president of the Fraternal Order of Police, John McNesby, cast suspicion on “who is watching or policing those who target law enforcement” and said he stands by all officers on the Philadelphia Police force. While claiming he condemns racism and violence “in any form,” McNesby himself referred to Black activists as a “pack of rabid animals” at a public “Back the Blue” pro-police rally in 2017. (AtlantaBlackStar, Sept. 7, 2017)

The violent and bigoted social media posts from eight different jurisdictions, including Philadelphia, St. Louis and Dallas, can be found at plainviewproject.org. Many confirmed that Philadelphia police fantasize about murdering the people they arrest, some calling for suspects to be summarily executed by “firing squad,” others lamenting that they didn’t have a chance to kill suspects themselves.

“Too bad this MF didn’t resist and meet a very violent and painful demise. Would have saved the taxpayers a LOT of money,” a York, Pa., officer wrote. The Washington Post reported: “‘Hope one of these kids get shot in the face,’ said a Philadelphia cop.”

Another meme shared by officers depicted a police dog baring its teeth with the text: “I hope you run — he likes fast food.” PVP draws attention to the proliferation of Islamophobic content, including the image of a Grim Reaper that appears to be shouting, “Death to Islam.”

As shocking as these posts are, they should come as no surprise. At least 139 of the 330 officers listed had previously been named in federal lawsuits involving police brutality.  Several named in the study had been targets of multiple misconduct probes. (billypenn.com, June 7)

In August 1979 the Justice Department filed an unprecedented civil suit against the city of Philadelphia, then Mayor Frank Rizzo, and 18 top city and police officials for condoning systemic police brutality.  The complaint stated that the use of excessive force by Philadelphia police especially directed against Black and Latinx people “shocks the conscience.”

In 2011 the city settled a federal civil rights lawsuit from a group of Black officers that Domelights.com, a website geared to cops and run by a Philadelphia police sergeant, was “infested with racist, white supremacist and anti-African-American content.”

In September 2016, this reporter witnessed and photographed police sporting “Thin Blue Line” flags — the kind waved by white-supremacists later in Charlottesville, Va. Last year, a police officer posted a picture of himself in blackface on social media. A Philly cop named Ian Hans Lichterman sports a Nazi tattoo reading “Fatherland” on his forearm. All these officers are, at the time of this reporting, still on the force and have been cleared by the same internal review process that the new batch of racist cops now face.

Commissioner Ross has put 10 of the named officers on desk duty and promised to begin implementation of anti-racist/anti-bias training for all police personnel.  On desk duty or still in the field, the officers named in the Plain View Project report continue to receive full pay and benefits. They continue to interact with the public. The PPD also has a history of promoting, not firing, police officers charged with bias.

Ross announced June 6 that the department would bring in an outside, unnamed law firm to assist with the department’s own investigation of the thousands of social media posts. This costly measure not only duplicates the work already done by the lawyers working with the Plain View Project, it also provides a convenient cover for the department to delay any action in hopes that public concern will once again blow over.

The city of Philadelphia is always strapped for cash when it comes to funding public schools or keeping libraries open, but when it comes to settling lawsuits that result from police brutality, money is no problem.  Between 2013 and 2017 Philadelphia paid over $50 million to settle lawsuits filed against police officers, most of whom remain on the force.

Activists in Philadelphia are demanding the officers, who make up a sizeable portion of the 7,000-strong police force, be fired. District Attorney Larry Krasner suggested he would not call these officers as witnesses at criminal trials on account of their violently bigoted posts. Krasner maintains a “do not call” list of police personnel who should not be called to testify due to confirmed instances of misconduct, but so far has not called for any cop in the city to be dismissed.

We must say it louder than ever: “The cops and the Klan go hand in hand!”