Over 60 cops and counterterrorism officers were mobilized at 6:30 a.m. on June 3 to allow Philadelphia Housing Authority officials to dismantle a 42-day occupation outside the agency’s new $45 million headquarters. But #OccupyPHA, using bullhorns, signs, banners and chants, quickly set up their protest camp right across the street from the new five-story North Philly building, where they continued to voice their criticisms of the corrupt housing agency. 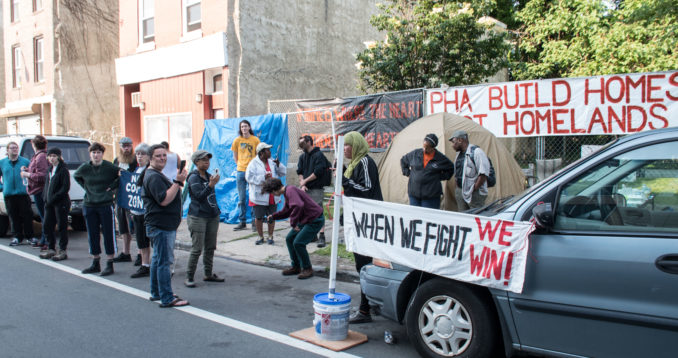 The PHA used construction equipment to evict the camp and place large rectangular planters in the area it had occupied. “They are putting planters there just to prevent us from protesting. They will have to remove them when they begin construction in the storefronts,” said Jennifer Bennetch, 34, a long-time critic of the Housing Authority in a June 3 press release by #OccupyPHA. “It’s really crazy to think just how much money they’re spending to keep us from holding them accountable, while there are over 40,000 people on the waiting list for PHA.”

The eviction follows the May 30 arrest of two protesters who now face multiple charges, including aggravated assault and obstruction. They had only been inquiring about whether PHA workers had obtained a variance for the construction fencing being installed, which now encloses every green lot on the 2000 block of Ridge Avenue and is higher than allowed under city codes. “It was an excessive and unnecessary use of force,” said Bennetch.

Resistance to eviction and displacement

Resistance to eviction and displacement continues to simmer among the remaining residents, some of whom are still fighting for their homes or resisting short notice evictions.

“We should have all gotten together and had the same lawyer,” said John, a Sharswood resident. “Instead everyone got their own representation and made side deals. Now none of us are getting what our properties are really worth, and those of us who wanted to stay are being forced out.”

Occupiers also point to the hundreds of unused and vacant PHA properties and the toxic exposure and lack of maintenance in existing housing facilities. They cite an absence of accountability and clear jurisdictional policy for a PHA police force beset by “cowboy cop” culture and a lack of uniforms. They also oppose the steady demolition of housing projects without the city building any replacement units.

In addition to the struggle in Sharswood, protesters point to upcoming demolitions of the Bartram’s Garden and Fairhill public housing projects. “How can they keep demolishing units of public housing when they haven’t replaced the ones they’ve already knocked down?” said Jeff, a member of the Philadelphia Tenants Union who was present during the eviction.

“People need to realize that what’s going on with public housing and with vouchers affects the entire rental market. When hundreds of units get demolished and people are put on vouchers that drives up rents for the whole city, as families are forced to find housing in the rental market. This is something everybody should be concerned with when we are in the middle of a housing crisis.”

With a poverty rate of 26 percent, gentrification has only made conditions worse for Philadelphia’s poorer neighborhoods. Northern Liberties, Fishtown, Brewerytown and other North Philadelphia communities of color — including Sharswood/Blumberg — have undergone shockingly rapid changes over the last decade that have displaced thousands of long-time Black and Brown families. Rents have gone up as the number of affordable units has fallen. Luxury apartments, fueled by a controversial 10-year tax abatement, have increased exponentially.

Housing investments are being set up to channel capital from the world’s largest hedge funds into legalized speculation on vulnerable populations and that is linked to austerity, privatization of public services, outcome-based government contracts, and monitoring and predictively profiling residents accessing needed services.

Education activist Alison McDowell, a local researcher and one of those unfairly arrested on May 30, states: “North Philadelphia is being targeted as a test-bed for predatory forms of financial speculation that essentially gambles on the lives of the poor.

“Once you understand the bigger picture,” McDowell said, “it is easier to make sense of the level of intense pushback we are seeing from the Philadelphia Housing Authority and police, and the silence of politicians and nonprofit organizations, all of which stand to benefit from these new systems of domination.”

“We’re just getting started,” says Bennetch. “I didn’t camp out here for 42 days just to leave now. The veil of secrecy is starting to lift on PHA and people are going to see just how corrupt the system is. The more they try to shut us up, the more support we get from the community and the activists. I’m just fighting against PHA’s role in mass gentrification and displacement and to defend my neighborhood from this colonial-style takeover by developers and big institutions.”