Reports from anti-war delegation members Sara Flounders and Joe Lombardo in Venezuela were used to prepare this article.

Leaders of the anti-war movement in the United States arrived in Caracas on March 9 and 10 to find out firsthand the truth of how the government and population are responding to the U.S.-led attacks on Venezuela. They will use this truth to build solidarity with the worldwide efforts to stop the covert U.S. war, economic sabotage and propaganda assault on Venezuela. 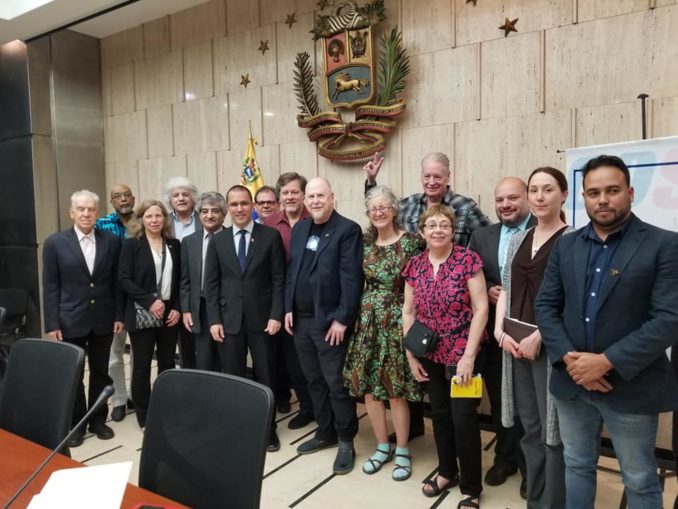 As they landed in Caracas, the delegates, like the Venezuelan people, were faced with a power outage caused by sabotage of the electrical grid. This interfered with transportation and communications for them, too, even though their hotel had its own power generator.

Everyone in the group had planned to arrive on March 9, but some airlines insisted that the travelers have visas just to fly to Venezuela. Since the break in U.S.-Venezuelan relations, no visas are being issued in the U.S., but most of the delegation members were able to fly anyway, based on letters from their Venezuelan hosts.

Arriving later that day and Sunday to complete the delegation were Sarah Martin from Women Against Military Madness; Kevin Zeese and Margaret Flowers of Popular Resistance; Darien De Lu, president of the Women’s International League for Peace and Freedom-U.S.; Miguel Figueroa, president of the Canadian Peace Congress; and Daniel Shea, board of directors, Veterans For Peace.

The delegation met over the next few days with Venezuelan Foreign Minister Jorge Arreaza, who discussed with them the historic struggle between the U.S. and Venezuela over who will control the great oil and gold resources of this South American nation. The fact that Washington is now acting so openly against the Venezuelan government exposes to people all over the world the real face of U.S. imperialism.

Role of U.S. population is key

Arreaza made it clear that the Bolivarian government attaches great importance to the potential response of the people in the U.S. He said you must be in the front lines, that you are the first victims of imperialism and that the most fundamental change will happen inside the United States.

This underscores the importance of the demonstration that the members of the delegation and their organizations are building for March 30 in Washington, D.C. UNAC originally called this event to protest the upcoming 70th anniversary of NATO, set to be celebrated there by the Western warmakers on April 4. But after the U.S. moves against the government in Caracas, the coalition refocused the March 30 action more urgently on opposing U.S. intervention in Venezuela. Many organizations now support this protest.

Solidarity groups in Venezuela are also paying attention to the U.S. movement. The Committee of International Solidarity (COSI) met the delegates as they arrived at the airport and have helped explain what is happening on the ground in their country.

In addition to our meetings with Arreaza, the North American delegates held discussions with organizers from COSI, including its president, Carolus Wimmer; Carlos Ron, the vice minister of foreign affairs for North America, who had been stationed in New York for some time; and Pasqualina Curcio, an economist at the Central University of Venezuela.

Curcio discussed the U.S. role in creating the “humanitarian crisis” in Venezuela. These include shortages of basic necessities: toilet paper, corn, milk, coffee and vital medicines. To counter these shortages, the Bolivarian government established a distribution network to serve 6 million families by importing food, medicine and hygiene products.

The current U.S. sanctions on Venezuela’s oil, the blocking of its banking services and the edicts that prevent the government from using its gold reserves all restrict the ability of the Venezuelan government to satisfy basic needs.

On top of this, the U.S. has handed $11 billion worth of assets of Venezuela’s national oil company, CITGO, directly to Juan Guaidó, a virtually unknown right-wing politician until U.S. Vice President Mike Pence suggested on Jan. 23 that Guaidó nominate himself to be “interim president.”

U.S. frank about plans for aggression

Foreign Minister Arreaza was recently in negotiations with the notorious Elliott Abrams, who just this January was appointed Special Representative for Venezuela by Secretary of State Mike Pompeo. Abrams had organized bloody right-wing coups in Central America in the 1980s for the Reagan administration and was also a key architect of the Iraq War.

Arreaza characterized Abrams as “frank” when he told the Venezuelan that “all options are on the table” — a threat of military intervention aimed at splitting the Venezuelan military.

When Arreaza then reminded Abrams that “The coup has failed,” the U.S. organizer of counterrevolutions shrugged and said, “This is a long-term project.”

Arreaza explained to the anti-war delegation that in countering the shutdown of its electrical power, Venezuela had to deal with an attack on the brain of its electrical system. “The enemy knows the weakness of the system,” he said. “The U.S. knows what Venezuela could not buy or replace. Knows what we have. This is cyber terrorism!”

Abrams also told Arreaza that to get peace, Venezuela must do as Nicaragua did in 1990, that is, hold a new election that the European Union would set up — and that would open the door to the right-wing.

Arreaza explained to the antiwar group that Venezuela has a broad system of social protection that began under Hugo Chávez and was even further expanded after Maduro became president. “That’s why,” he said, “four days without power in several major cities did not lead to chaos,” as it would have in most of the world. The imperialists wanted an image of people looting food markets, but that failed.

Russia, China and Turkey are helping Venezuela, said Arreaza. “We need the solidarity of the whole world, though. Terrorist brigades are being armed against us.”

The demonstration supporting Guaidó on the day the delegation arrived was smaller than its organizers had projected. While Maduro may have the support of half the population, his opposition is divided into many forces. And most of them oppose U.S. military intervention.

Eastern Caracas, an upper- and middle-class area, is a base of the opposition to the Maduro government. Western Caracas is working class and Black, with a lot of support for the government. Lombardo reports that the west side used to be a real shanty town, but the Bolivarian Revolution put resources into this community and now the people live in nice apartment buildings.

Guaidó’s forces, reports Flounders, were described as racist, sort of the KKK of Venezuela. Nine of the people burnt to death by the counterrevolutionary opposition in 2017 were Black Venezuelans.

Even by Sunday, March 10, the delegation already had a lot of media requests for interviews. They plan a press conference at the United Nations in New York City on Monday, March 18 at 11 a.m., as well as a public webinar reportback.