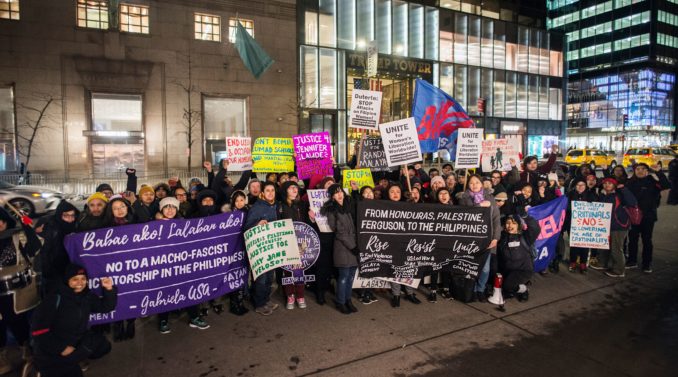 International Working Women’s Day, March 8, is celebrated in many countries to acknowledge past and present struggles for women’s equality and liberation in all spheres of life. These struggles can take many forms — marches, rallies, teach-ins, strikes, direct action, walkouts.

Millions of women, including gender-nonconforming people — in oppressed countries and even in rich capitalist centers — are aware that the origins of IWWD are pro-socialist, anti-patriarchal and overall anti-capitalist.

These same women have also been inspired by the current #MeToo movement, initiated by Tarana Burke, a Black woman in 2007, to show solidarity with women of color victimized by sexual and racist misconduct.

Before the present White House regime came to power in 2016, IWWD had been marginalized inside the U.S., especially compared to its politically conservative counterpart, Mother’s Day, widely celebrated on the second Sunday in May.

Even when Congress declared Women’s History Month in 1975, little was known about the role played by the women’s mass movement of the late 1960s and early 1970s in winning this proclamation.

But as Bob Dylan’s classic lyrics state, “The times they are a-changin.” Nothing stays the same, including in the belly of the beast, the United States.

The ushering in of the misogynist, white supremacist Trump government, coupled with the #MeToo and #TimesUp movements, have helped elevate much-needed class consciousness about the significance of IWWD among sectors of U.S. society, especially women of all ages, nationalities and gender expression.

Due to these movements, Barry Jenkins, an award-winning Black director, expressed his support for more women directors during the Feb. 23 Spirit Independent Awards ceremony.

And on March 8, NBA TV, a channel dedicated to games and news for the male-dominated National Basketball Association, paid tribute to the role that women play in front of and behind the camera in helping to make the NBA the second most popular U.S. pro sport, behind the National Football League.

Even the sports conglomerate, Nike, created an inspiring TV ad for Women’s History Month, voiced by the great Serena Williams, showing women and girl athletes, including those who are trans, Muslim and with disabilities, using sports as a powerful platform for change.

Notwithstanding this progress, mainstream media have fallen short in explaining the real class origins of IWWD, just as with the founding of International Workers Day or May Day, which brought about the eight-hour workday in the U.S. through militant struggle. Corporations will always try to co-opt progressive historical events and leaders in an attempt to increase their insatiable profit line.

It is the responsibility of revolutionaries and activists to resist and to push consciousness to the left within the U.S. population. We must show that unorganized women workers, including immigrants, were in the forefront of organizing for a livable wage and better working conditions in the factories, in the offices and in the fields in the early 1900s. Theirs were the battles that paved the way for IWWD.

Today, that tradition continues globally — with women workers going on strike against the attacks on public education or organizing one-day stoppages against transnationals such as McDonald’s, Burger King or Google for better wages, health care benefits and against sexual abuse.

The real goal of IWWD is to build solidarity for revolutionary change that includes women and gender-nonconforming people — 365 days a year, regardless of borders.