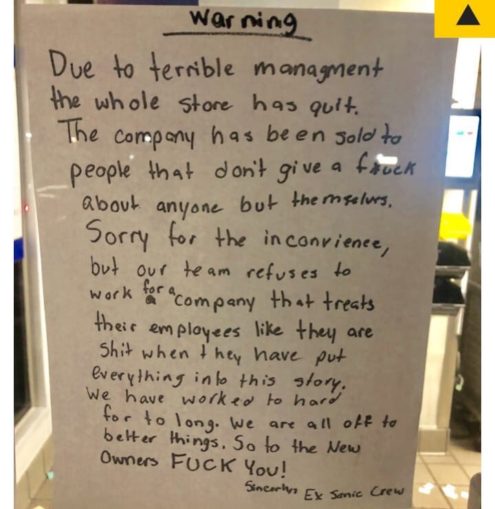 Workers at three Sonic Drive-In restaurants in Ohio walked off the job in response to company threats of reduced pay and layoffs on Feb. 22. Sonic staff in Circleville, Grove City and Lancaster quit as a group after being told that, along with other grievances, their pay would be reduced from $8.55 an hour (Ohio’s current minimum wage) to $4 an hour plus tips.

These stores were among the 10 locations in the Columbus market acquired by Sonic’s operating affiliate, SRI Holding Co., in December. SRI took over eight of the restaurants and closed the other two due to “poor performance” on Feb. 25.

Early news of the proposed changes by SRI caused the workers to storm off the job, leaving behind angry notes and letters explaining their actions. At the Circleville store, a note on the window read, in part, “Due to terrible management the whole store has quit. The company has been sold to people that don’t give a f*ck about anyone but themselves.” The note was signed by “Ex-Sonic Crew.”

A letter at the Lancaster store called Sonic “the trashiest company we have ever seen.” It was signed by “The Breakfast Club,” referencing the 1985 film depicting a group of high school students in detention who, despite their differences, band together to reclaim their lives.

Policy Matters Ohio Project Director Hannah Halbert told Workers World, “The letters the Sonic workers posted during their walkout highlight many of the problems with this sector.”

Sonic, which advertises itself as “America’s Drive-In,” is not the only restaurant chain that exploits its workforce. Food service and prep are known for low pay, erratic scheduling, lack of job security and opposition to unions.

“The letters were powerful because they show how little the workers were valued despite their commitment to the company,” Halbert said. “People who work in food service care about their job, but too often no one cares about them.”

Since the walkout was reported by The Scioto Post (based in Circleville), multiple news outlets picked up the story and photos of the notes went viral. Sonic quickly issued statements to calm the social media storm. Vice President of Public Relations Christi Woodworth wrote on March 1: “We recognize that changes like this can be difficult for employees to understand and most current employees will have the opportunity to continue working at the drive-in.” Sonic denied there would be pay cuts, claiming the incident was a result of miscommunication.

“It is hard to believe the workers would have taken these actions if these changes weren’t on the way,” Halbert said. “These are folks working tough jobs, with no union protection, probably with very little to fall back on. They took a huge personal risk to stand up to this company.”

It is uncertain if any of the workers will return. But, as Halbert pointed out, “The walkouts created pressure, and that they got the company on record saying that pay rates would stay the same and that tips would not be taken out of base pay is a win.”

Over 158,000 Ohio workers are in food service. Data from the Ohio Department of Job and Family Services indicates this sector will continue to be the Buckeye State’s largest job category through 2026.

Some Ohio legislators have recently called for raising the minimum wage to $15 an hour by 2023. If passed, the measure would benefit more than 2 million workers. But this alone will not stop exploitation in food service and other sectors. Workers need $15 an hour right now.

“The most basic worker protections — our minimum wage and overtime laws — have been eroded over time,” Halbert said. “Unionization continues to be under threat. Collective action is an effective way to demand that we rebuild that foundation.”