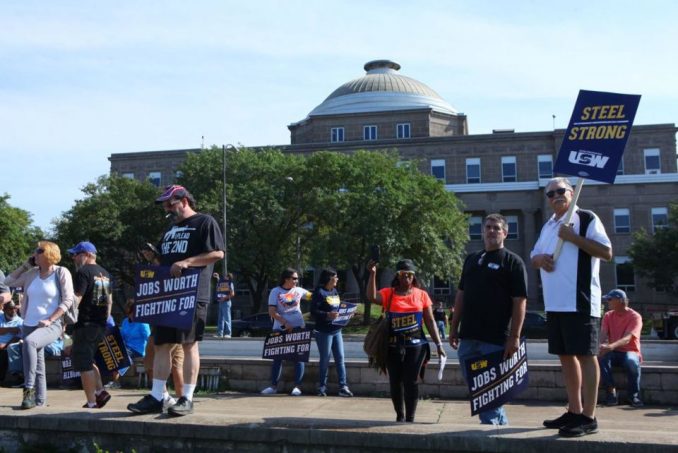 Thousands of workers at U.S. Steel and ArcelorMittal USA voted overwhelmingly the week of Sept. 3 to authorize their union leaders to call a strike on 48-hours notice. The United Steelworkers master agreement with U.S. Steel covers more than 16,000 workers at 14 plants across seven Midwest states, Alabama and Texas. (USW.org, Sept. 7) USW also represents 15,000 workers in six Midwest states at ArcelorMitta USA, a subsidiary of the world’s 10th largest multinational steel manufacturer based in Luxembourg. Since the collective bargaining agreements at both companies expired Sept. 1, union members have agreed to work under a rolling extension.

USW production, maintenance, office and technical workers at both companies are fed up. They were expecting a generous offer, considering their wages were frozen in the 2015 three-year contract. Over the same period, management gave itself more than $50 million in pay and bonuses. Now Trump’s 25 percent tariff on steel imports is fattening industry profits.

“Between the tariffs and the tax break for corporations, [bosses] stand to make $2 billion this year,” Don Furko, president of USW Local 1557 in Clairton, Pa., told the Pittsburgh Post-Gazette Sept. 21. The workers, meanwhile, are struggling to make ends meet. No wonder they’re battling for better hourly wages and protection of health care and pension benefits.

USW membership rejected similar contract proposals on Sept. 21. An interview in the Washington Post put the chances of a strike at 90 percent. A thousands-strong steel strike would send a clear message that workers refuse to take crumbs from tariff- and tax-fattened corporations.

A Sept. 14 report by Truthout painted a powerful picture of public defenders and judges struggling for im/migrant rights. Last November, when Immigration and Customs Enforcement agents abducted a Latinx client meeting his lawyers in court, New York City public defenders, members of the Association of Legal Aid Attorneys, United Auto Workers Local 2325, walked out to demand state agencies stop collaborating with ICE. In March, 200 lawyers rallied against ICE’s presence in public courts. After a Philadelphia-based immigration judge was removed from a case for not following the Trump mandate for quick deportation orders, Local 2325 and the National Association of Immigration Judges initiated a formal grievance.

In the latest high-profile case, members of Local 2325 and Service Employees Local 1199, which represent Legal Aid paralegals and social workers, played a leading role in the victory to stop the deportation of Pablo Villavicencio, whom ICE detained June 1 while he was delivering pizza to the Fort Hamilton Military Base in Brooklyn. Attorney Evelyn Malave told Truthout, “[T]hese issues that deeply affect us are also workers’ issues. Pablo was at work when this happened to him.”

Nonprofits once took center stage in fighting for im/migrant rights. Now unions are entering the ring in a new and important stage in this struggle.

Several union members spoke publicly of their harassment. After one woman reported to the casino’s human resources office that her supervisor refused to stop harassing her, after she had refused his advances for over a year, HR responded by interrogating her, insinuating she had elicited his behavior. Targeted by management, she was suspended twice before being fired in May. Another female worker reported that a guest asked her for “another kind of service” that he would pay extra for. When she told her supervisors, they laughed and said at least he offered to pay up. One woman summarized: The workers feel they’re “not protected by anyone.”

Contracts at 34 Las Vegas properties expired June 1, and a strike was authorized if new terms — higher wages, protection of existing benefits and increased workplace safety measures — weren’t reached in a timely manner. As of early September a five-year contract was reached at all but four properties. The union is recommending that the NGCB establish more rigorous reporting procedures and eliminate nondisclosure agreements. (casino.org, Sept. 8)

Facebook ads have been found to let landlords discriminate against people of color and employers to discriminate based on age. Now charges have been filed against Facebook that it helped employers discriminate against women workers. The Communication Workers and the American Civil Liberties Union filed Sept. 18 with the federal Equal Employment Opportunity Commission against Facebook and nine employers. The case involves use of Facebook’s targeting technology that can exclude women from ads for openings like truck driver and window installer. The charges were filed on behalf of any woman who used Facebook to search for a job during the past year. (New York Times, Sept. 18)