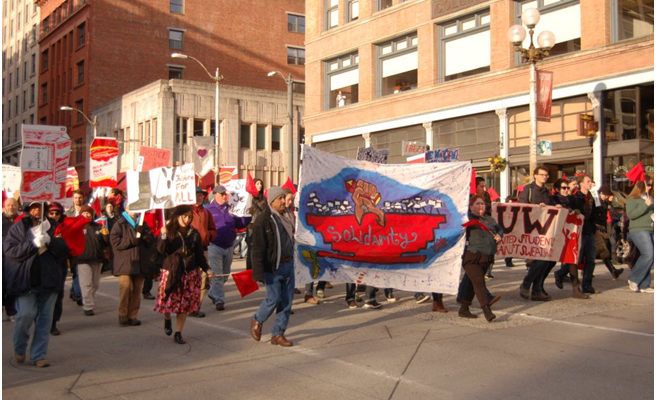 Seattle — A united front of labor and community groups came together at Darigold headquarters in Seattle on Sept. 20, demanding that the dairy company end its superexploitation and abuse of workers.

Darigold is a dairy products juggernaut of 500 huge factory farms in the Pacific Northwest with $2 billion in yearly sales. Stan Ryan, brother of Speaker of the House Paul Ryan, is Darigold’s CEO.

In retaliation for the workers’ suing for labor abuse, Ruby Ridge Dairy, a member of Darigold, has fired and countersued 12 dairy workers. The Sept. 20 rally kicked off a five-day fast by 12 farmworkers demanding justice for their counterparts known as the Darigold Dozen.

The Seattle City Council has just unanimously passed a resolution supporting the Darigold Dozen. Workers, including the fasters, picketed Darigold before the rally. The Darigold Dozen are seen as pioneers, motivating farmworkers across the Northwest to speak out against racism, sexual harassment, wage theft, workplace accidents and missing safety precautions.

Abuses at Ruby Ridge include the death of Randy Vasquez in 2015, who drowned in a manure lagoon at the dairy. Speaking at the rally, dairy worker Yolanda Carrion declared: “I am here to support the Darigold Dozen. I am here to stop sexual harassment and to make sure workers get their lunch breaks and rest breaks.”

After the rally a delegation from the United Farm Workers went to Starbucks international headquarters, home of a huge consumer of Darigold milk. The UFW made themselves heard, but Starbucks made no commitment to put pressure on Darigold. The next day the UFW picketed Starbucks in Pasco, in Washington’s agricultural belt.

As the court case now reaches its final stages, supporters are asked to contact their nearest Starbucks to demand justice for Darigold workers. People can access a flyer from UFW.org: “Starbucks: Take responsibility for the milk you use,” and tell your local Starbucks manager to pass the message on to corporate.