Police raided an encampment outside the Philadelphia Immigration Customs and Enforcement facility for the second time on July 5. It was the fourth day of the people’s protest.

Ten minutes before the early afternoon attack, police told protesters they had to move water coolers and supplies off a sidewalk and clear space in front of the building. As people began to comply and legal supporters tried to clarify the situation, the police, using bicycles, pushed through the camp, knocking down tents and canopies, throwing possessions aside and pushing people who questioned their attack. Seven people were arrested.

The encampment outside the Philadelphia ICE facility, the most aggressive facility in the U.S., followed days of protests beginning July 2 around three demands: Abolish ICE; close the federal immigrant detention facility in Berks County, Pa., where hundreds of families, including children, have been held indefinitely; and end local collaboration with federal immigration officials, including the Preliminary Arraignment Reporting System (PARS), a database of arrests that the city has contractually shared with ICE.

A press conference following the police assault was held later that day. Police threatened to seize sound equipment shortly before it was scheduled to start, leaving speakers without amplification against a noisy backdrop of city trash trucks removing debris from the camp.

Despite the police attempt to silence their voices, speakers delivered their messages and demands loud and clear. The conference was covered by most major news media.

Speakers outlined the encampment’s three demands and noted that Pennsylvania Gov. Tom Wolf has the power to close the Berks facility with an executive order. Im/migrant activists spoke on the connection between U.S. imperialist wars and intervention abroad and the crisis of mass migration. 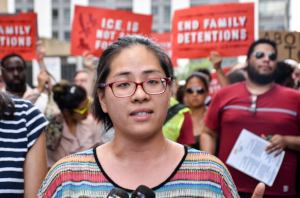 Nancy Nguyen, a child of Vietnamese refugees to the U.S. and executive director of VietLead, related the history of the U.S. war on Southeast Asia, where more bombs were dropped than during all previous wars combined. “We are here now, but since 2003, over 1,475 people from Vietnam and Cambodia have been deported. We are seeking justice and we stand in solidarity with the people who have been occupying this space. More eyes are on ICE now.”

Colombian activist Mara Hanao, from Philly Socialist, related a similar experience of migrants driven to come to the U.S. because of oppression due to U.S. intervention and attacks on workers by multinational corporations. She recalled the massacre of 2,000 banana plantation workers by the United Fruit Company in 1928, which contributed to the drive of people in Colombia to flee to the north.

The Rev. Katie Aikins of the Tabernacle United Church stated, “The U.S. is a nation bathing in the ideology of white supremacy since its founding. It uses this rhetoric to terrorize people who don’t look like us. PARS is part of the problem of creating a terrorizing existence for immigrants.” 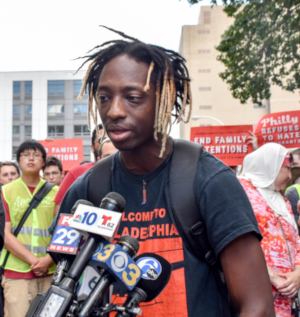 Representing Workers World Party and Philadelphia REAL (Racial, Economic and Legal) Justice, Cornelius Moody spoke to the issue of accountability and of resisting a system unaccountable to the people: “This police force in our city, ICE and the U.S. government are not accountable to the communities they police and oppress. If you have a system that is acting upon you oppressively and is not accountable to you, as a community you have a right and responsibility to resist that force.

Also speaking for REAL Justice, Anthony Smith, first generation U.S. born, from an immigrant family, raised that “Black people in Philadelphia and all across the country suffer from a very intense so-called separation of families. The military, police and ICE all function together to destroy families and communities.

“The system isn’t broken. It’s working as it always has been. … And until we decide that we will take power from the state and deal with our communities ourselves, we will be caught in this constant loop. We do not need the police or ICE to deal with issues we can deal with ourselves! Abolish the police! Abolish ICE!” 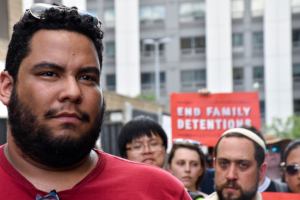 Miguel Andrade, with the immigrant rights group Juntos, expressed thanks to the people who came out at the encampment who are not fighting for immigrant communities, but with them: “White supremacy has been a disease in this country since 1492. Police come out of a racist institution of hunting down runaway slaves. Border patrols come from a renegade group of the KKK. ICE comes out of intense Islamophobia after the 9/11 attacks.

“White supremacy has been fueling and perpetuating every single attack that communities of color have been facing for decades. It is time to stop it. ICE didn’t start under [President Donald] Trump. The deportation machine that Trump is using white supremacy to fuel was handed over to him by the [President Barack] Obama administration.

“ICE has been terrorizing our communities for decades. My father was deported when I was 10 years old. I know what family separation at the hands of the U.S. government feels like. That is something you never recover from. I haven’t seen my father in person for over 10 years. But I’m still fighting.

“My community has been fighting against ICE for years. We do not give credit to Mayor [Jim] Kenney or ­[former Mayor Michael] Nutter for declaring Philadelphia a sanctuary city. The policy that Kenney was in federal court to defend was written and strategized by the immigrant community of Philadelphia. We the people pushed them to do it.

“We must push them again. The ICE office here is the most aggressive in the country. Immigrant communities have been fighting this for years.