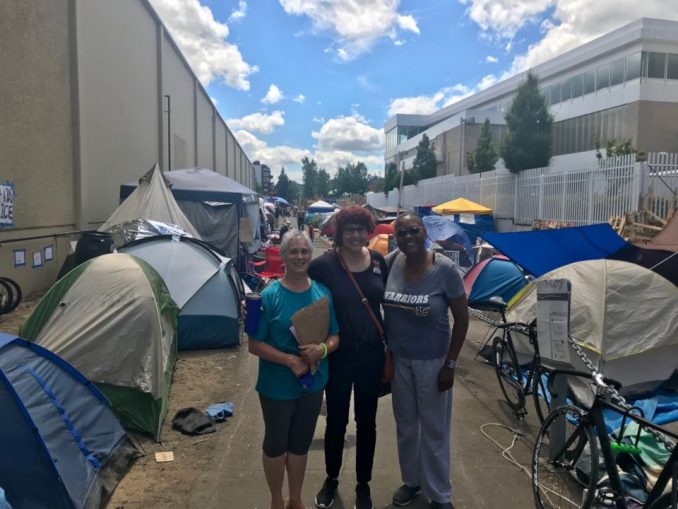 #OccupyICEPDX continues to face off with federal agents after three weeks of developing a thriving, organized resistance with more than 50 tents, hundreds of protesters and tremendous community support. Occupiers shut down the Immigration and Customs Enforcement office here for two weeks and began a hunger strike on July 4.

Protesters are not intimidated by the cops’ use of arrests, tear gas and sharpshooters. They say they are here to stay until their demands are met: Abolish ICE, reunite immigrant families and stop incarcerating asylum seekers.

The occupation has developed a sophisticated community structure centered around a common anti-ICE, anti-capitalist program. Occupy teams include maintenance and engineering, food and water distribution, medical, child care and even group meditation. The People of Color caucus organizes 24-hour guard duty, security guidelines and decisions concerning interactions with cops, and policies concerning photos and videos. They hold nightly vigils and regular rallies centered around the voices of people directly affected by U.S. imperialism.

#OccupyICEPDX has forged ties between various leftist groups in Portland and raised more than $15,000 for Pueblo Unido, a Portland legal defense fund for immigrants.

Portland Mayor Ted Wheeler said the ICE agency was “on the wrong track” and that the city would not attempt to clear the occupation camp. He said there were no plans to interfere with the peaceful protests.

However, Portland police have a sordid history of violating the city’s sanctuary city status by supporting ICE and Department of Homeland Security agents. On June 28, city cops helped DHS agents by closing streets in the vicinity of the ICE office to make way for a raid of the encampment. They cleared the sidewalk in front of the building’s entrance and erected a “no climb” fence around the perimeter of the facility.

The fence obstructs the sidewalk on all sides, yet the city has not issued any citations for blocking public property — as they routinely do for houseless people. It makes the sidewalk inaccessible for those using mobility devices, in violation of Americans with Disabilities Act regulations.

On July 3, the Portland facility reopened. Several media outlets reported that the occupation was disbanded.

Yet the truth on the ground is very different: the occupiers maintain they will not stop until ICE is abolished. They see the U.S.-manufactured im/migrant crisis as a crisis of imperialism and a direct result of U.S. intervention. People seeking asylum in the U.S. aren’t fleeing from natural disasters, but rather from the violent, unlivable conditions created by U.S. hegemony in countries around the world.

OccupyICE has spread to other cities around the country. It echoes other occupy movements of workers and oppressed, like the Paris Commune, the general strikes of the early 20th century, Occupy Wall Street and Standing Rock. It presents an opportunity to expand the workers’ struggle into deeper arenas of the class struggle and build.

A broad-based, global anti-war movement is intrinsic to solving the im/migrant and refugee issue. While the capitalist media frame immigrants and refugees as a crisis, the real crisis results from capitalism itself. Unaffordable housing and health care, extreme inequality, racist police violence, pollution and climate change are all real issues facing workers and oppressed peoples.

Racist attacks on migrants and refugees by the U.S. ruling class serve to divide the working class and distract us from the real culprits behind the serious problems we face today. But through continued proletarian internationalism, workers in both imperialist core countries and in colonized countries can fight together against their common enemy: the ruling class.