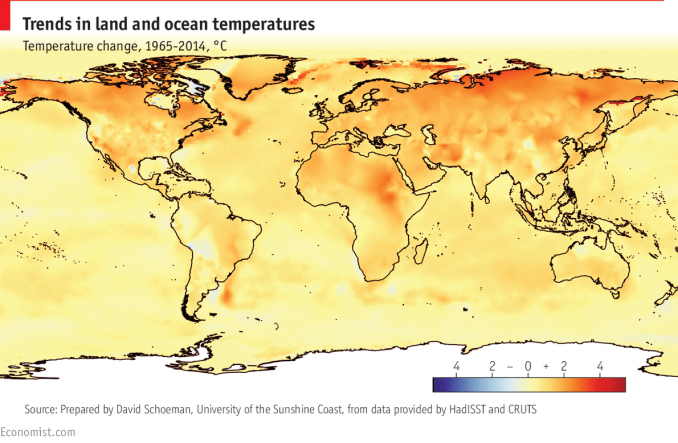 From southern California to Scotland, to the misty British Isles and the Arctic coastline of Siberia, temperatures were way higher than ever recorded the last week of June and the first week of July. When temperatures in Siberia hit 90 degrees Fahrenheit, 50 degrees higher than normal, and the land breeze drove the ice pack out of sight — whether or not there’s an official declaration of a Siberian heat wave is not really relevant — it’s hot.

More than 113 million people in the United States were under heat warnings or advisories stretching from the Mississippi Valley, up to Chicago and over to Washington, D.C., Baltimore, Philadelphia, New York and Boston, according to the Weather Prediction Center of the National Weather Service.

Denver, Mount Washington, N.H., Burlington, Vt., and Montreal and Ottawa in Canada all set records for the heat index that combines heat and humidity.

In Europe, multiple heat index records were set in Scotland, the north of Ireland and Ireland. France set high temperature warnings in 21 departments, out of 94 administrative regions.

In Eurasia, records were set in Tbilisi, Georgia, and Yerevan, Armenia, as well as in southern Russia.

In South Asia, Pakistan, a very poor country with a large population, is normally very hot in summer. Temperatures of 105F are common, but when temperatures don’t fall much at night, the humidity remains high and daytime temperatures go above 110 and even to 122, it’s unbearable. Workers who can’t afford electricity for fans, much less fans, and millions of subsistence farmers, who do hard work in the heat of the day, face heat exhaustion.

According to the Dawn, a local English-language Pakistani website, more than 1,000 Pakistanis have already died in Karachi — the largest city in the country — and many more uncounted have died in rural areas and smaller cities. (dawn.com)

It’s not just in poor countries where heat causes deaths. In Montreal, when the temperatures hit the high 90sF, poor people, many elderly, who live in basement apartments below ground level, suffered disproportionately. They can’t use fans, and air conditioning is rare in Montreal. Hundreds were taken to the hospital by emergency services and 35 to 40 people died.

If global climate is getting warmer, heat waves will become more frequent and more intense. Compare global warming, which every reputable scientist considers is caused by human activity, to cigarette smoking. It is hard to “prove” that an individual with lung cancer got it because they smoked.

Scientists examined the physical stresses caused by smoking and their relationship to lung cancer. They also recorded the incidence of lung cancer among smokers versus its incidence among nonsmokers. The combination of the stress as cause and statistics convinced them smoking provoked lung cancer.

Similarly, it is hard to prove that a particular heat wave was caused by global warming. But when almost all of this planet’s Northern Hemisphere is filled with 20-to-40 heat waves and thousands of people — mainly workers and farmers — are dying and crops needed to feed billions of people are withering in the fields, the assertion that global warming is causing these heat waves becomes much stronger.

In a press call covered by CNN on July 3, 2017, Texas Tech University climate scientist Katharine Hayhoe said, “With every heat wave, probably the number one question is, is it climate change, or is it not? Well, the answer is, it’s both. We get heat waves naturally, but climate change is amping them up, it’s giving them that extra energy, to make them even more serious, and have even greater impacts.”

Major population centers in Southern Asia, Pakistan, India and Sri Lanka have their own particular concerns.

The Paris Accord set as a goal to keep global warming to less than 2 degrees Celsius above pre-industrial levels, a difficult goal now that Trump has withdrawn the U.S. from the agreement. A June 25 article in Nature Geoscience theorizes that future global warming may actually be twice as warm as now projected by climate models.

“Observations of past warming periods suggest that a number of amplifying mechanisms, which are poorly represented in climate models, increase long-term warming beyond climate model projections,” said lead author Prof. Hubertus Fischer of the University of Bern in a press briefing.

Current models don’t take feedback loops into consideration. Take the heat wave on the Siberian coastline as an example. Land breezes drive the ice off shore, opening up more dark water to be heated by the sun and not reflected by the ice. This melts marine permafrost, which releases more heat-trapping methane gas, leading to more warming.

Heat kills more people in the U.S. than floods, lightning, tornadoes and hurricanes combined, according to National Weather Service statistical data from the National Oceanic and Atmospheric Administration. If capitalism continues to ravage the globe, it is possible that the maintenance of human life, not to mention entire ecological systems, will be nearly impossible in large parts of the world.

We need a system change that will upend this impending catastrophe. We need a path to socialism that rejects “profit first” and acts for people’s needs — and the planet’s survival. n