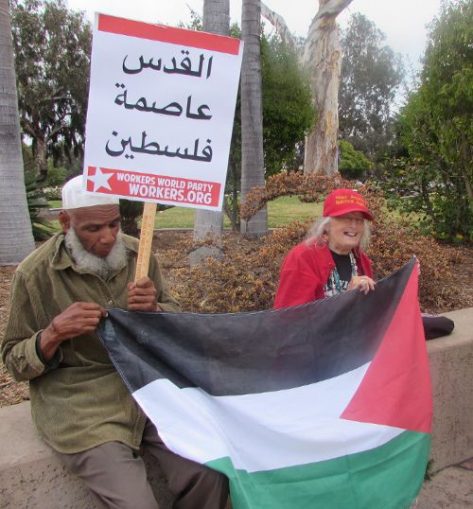 Workers World Party hosted a rally and vigil in San Diego on June 22 in honor of Palestinian rescue worker and volunteer medic Razan al-Najjar, as well as all the martyrs killed in Gaza during the Great March of Return.

Najjar was murdered by the Israeli Defense Force on June 1 as she went to the aid of an elderly injured protester at the Gaza boundary fence that imprisons Palestinians. An IDF sniper shot the 21-year-old nurse as she advanced with her hands up to show she was unarmed. She was clearly identified as a rescue worker.

The Great March of Return began in late March, affirming the right of Palestinians to return to their homeland. Since then the Israeli military has killed hundreds and wounded thousands at the Gaza boundary, including 223 paramedics, seemingly targeting rescue workers deliberately.

San Diego protesters gathered at the Balboa Park fountain for the evening rally. In addition to members of WWP, there was support from the Committee Against Police Brutality, the Party for Socialism and Liberation, and Labor San Diego, as well as several members of the local Palestinian community and unaffiliated community members.

Demonstrators held signs demanding justice for Palestine and an end to U.S. support for the racist apartheid state of Israel, and affirming that Jerusalem is Palestine’s capital. Also on display was a large, full-color painting of health worker Razan al-Najjar by WWP member Codie. Carl Muhammad led the crowd in chants of “From Palestine to Mexico, Border walls have got to go!” and “¡Viva, viva, viva! ¡La lucha Palestina!”

WWP member Bob McCubbin addressed the crowd, calling for the U.S. to get out of the Middle East and expressing the party’s full support for the Palestinian right of return to occupied Palestine.

Another WWP member, Rahui Suré Saldivar-Soto, spoke on the importance of fighting from within the belly of the beast and honoring all the lives that have been lost in Palestine. Workers World newspaper was distributed to receptive park attendees, and several productive conversations ensued, including with a group of preteens from a YMCA summer camp.

At a June 23 picket in New York City in front of the office of the Friends of the IDF, protesters briefly blocked access to the doors, while chanting against the FIDF’s fundraising for war crimes, racism, occupation and apartheid. Ralliers also distributed flyers and carried signs to demand freedom for imprisoned Palestinian leader Khalida Jarrar. The action was organized by Samidoun: Palestinian Prisoner Solidarity Network.

Jarrar has been imprisoned without charge or trial for nearly a year under “administrative detention,” with a new detention order issued by the Israeli occupation military on June 14. Jarrar is a leftist, feminist, Palestinian parliamentarian, aligned with the Popular Front for the Liberation of Palestine and a longtime advocate for Palestinian prisoners’ freedom.

Joe Catron, U.S. coordinator of Samidoun, said at the rally: “Khalida’s decades of solidarity with Palestinian political prisoners and the prisoners’ movement inspire all of us supporting the same struggle. Her administrative detention by Israeli occupation forces is a clear effort to impede her work, particularly her role in efforts to hold Israel accountable at the International Criminal Court for its crimes against Palestinians.” (For more information on Jarrar’s struggle, see tinyurl.com/y79g7kss.)