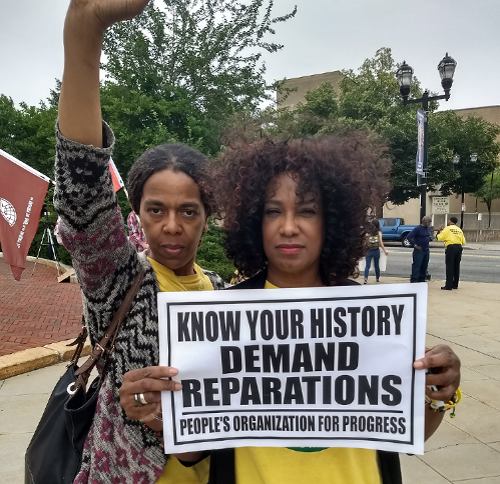 Despite threatened thundershowers, 50 people took to the streets of Newark, N.J., on June 23 to demand reparations for Black people.

Every year the People’s Organization for Progress — a dynamic grassroots group based in Newark — calls a rally and demonstration to demand justice for the African Holocaust. POP Chairman Lawrence Hamm proclaimed the slogan initiated by the December 12th Movement: “They stole us, they sold us, they owe us!”

Hamm described how Black people were betrayed after the Civil War. Land that had been turned over by Gen. Sherman to formerly enslaved Africans was taken away by force.

The Union army’s triumph would have been impossible without the valor of hundreds of thousands of Black soldiers and sailors, 40,000 of whom died. Before 1860, the vast majority of U.S. exports were produced by Black people on slave plantations.

Roger Wareham, a lead attorney for the reparation lawsuits filed in federal court, spoke from the December 12th Movement, which organizes in the Black and Latinx communities around human rights violations, particularly police terror. The Reagan administration tried to jail Wareham and other activists in connection with the failed New York Eight frame-up in the early 1980s.

Other speakers included representatives from the Black Is Back Coalition, Black Lives Matter New Jersey and the Green Party.

Speakers pointed out that people were standing on land that was stolen from the Lenni-Lenape Nation, which is now fighting a New Jersey pipeline. Reparations were demanded for Indigenous peoples, too.

The activists marched down Market Street to the busy downtown intersection at Broad Street. Along the way people raised their fists in support. Drivers honked their horns for reparations.

Newark was deliberately deindustrialized and impoverished by the ruling class in retaliation for its historic 1967 rebellion against racism. Yet within the city’s devastated downtown is the headquarters of the fantastically wealthy Prudential Insurance Company. Just dividing up Prudential’s $766 billion pile of assets among the estimated 46 million Black population would provide more than $16,000 to every Black person in the United States.

The participants in this march and rally came from diverse backgrounds. Among them was 81-year-old Clarence H. Seniors, who was active with Workers World Party during the 1960s and 1970s. Seniors fought segregation in Atlanta and was the second African American to receive a library card there. He helped lead the Monroe Defense Committee, which fought for the freedom in 1962-63 of liberation fighter Mae Mallory, who died in 2007. Mallory was framed because she helped Mabel Williams and Robert Williams, who organized armed self-defense against the Ku Klux Klan in Monroe, N.C., in 1961.