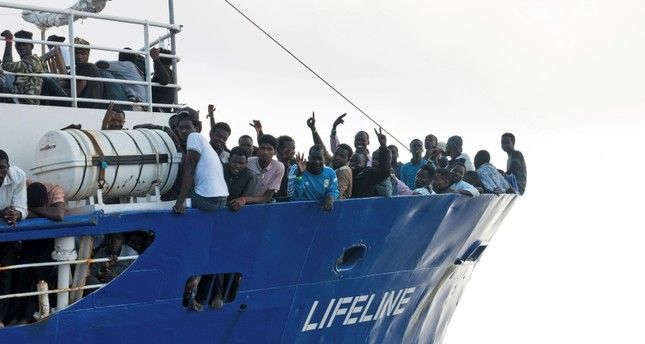 Lifeline, a ship operated by a German nongovernmental organization, rescued 230 people off the Libyan coast.

A humanitarian and political crisis is brewing in the European Union over the issue of im/migrants. Millions upon millions of people attempting to escape wars and violence, poverty and persecution of all sorts in sub-Saharan Africa, the Middle East, Afghanistan and North Africa have fled toward what they see as more stable prosperity in Europe.

The refugees are willing to take serious burdens and risks getting there. Smugglers, who offer a spot on underpowered, overcrowded rubber dinghies, charge high prices. Crossing the Mediterranean Sea is dangerous. Of the 44,000 refugees who have attempted so far this year, more than 1,000 failed to survive, according to the UNHCR, the U.N. Refugee Agency, on June 25. (data2.unhcr.org)

The political crisis was brought to a high point by the recent election in Italy. A coalition government of the Five Star Movement and the racist League took control, with League leader Matteo Salvini becoming a vice premier and minister of the interior. Salvini immediately began the process of closing the country’s refugee reception centers, which held hundreds of thousands of refugees.

When Salvini made a campaign-style tour on June 3 of southern Sicilian ports — all of which have seen large debarkations of refugees from Libya, particularly in Pozzallo — he was met with bands of left opponents carrying signs that read, “Welcome refugees.” These opponents held their own against Salvini’s supporters, who want to see 700,000 people immediately expelled.

Precipitating a humanitarian crisis, Salvini also closed Italian ports to the Aquarius, a rescue ship operated by Doctors Without Borders, with 629 people on board, including children, pregnant women and people with medical problems. After a few days the Spanish government agreed to accept the ship, and the French government said it would accept some of the rescued passengers.

Salvini did the same thing to the Lifeline, a ship operated by a German nongovernmental organization that had rescued 230 people off the Libyan coast. He even tried to make it hard to deliver supplies to the ship and insulted the people onboard, calling them “human meat.”

The Maersk Alexander, a container ship that picked up 113 refugees but also had cargo for Sicily, has been denied permission to enter Italian waters as well. The new Spanish government, trying to present a progressive face, is likely to accept both ships.

On the weekend of June 23-24, Salvini insisted that 1,000 migrants on the coast of Libya be picked up by the Libyan coast guard, rather than European nongovernmental organizations.

In Germany, which has accepted more than 1 million refugees, a section of Chancellor Angela Merkel’s coalition has taken a much harder line than Merkel and wants Germany to stop taking any new refugees. President Emmanuel Macron in France is under pressure from a semi-fascist, right-wing party called the National Rally (previously the National Front).

Merkel and Macron held an emergency, off-the-record meeting on June 24, to come up with a solution to the migration crisis, to present to a full meeting of the European National Council at the end of June. The regimes directing Poland, the Czech Republic, Slovakia and Hungary — which form the V4 “Visegrad Four” group — avoided taking part in this meeting. They refuse to take in asylum seekers from other EU states.

Given all the political maneuvering and jockeying over the migrant issue, the 28 EU countries have to take into account that the unions and many political parties in the front line states — Spain, France, Italy and Greece — know in their bones and in their foundational history that solidarity is the most important tool in the arsenal of the working class. This solidarity lies behind all the rescue missions accomplished since waves of immigrants began crashing on Europe’s shores in recent years.