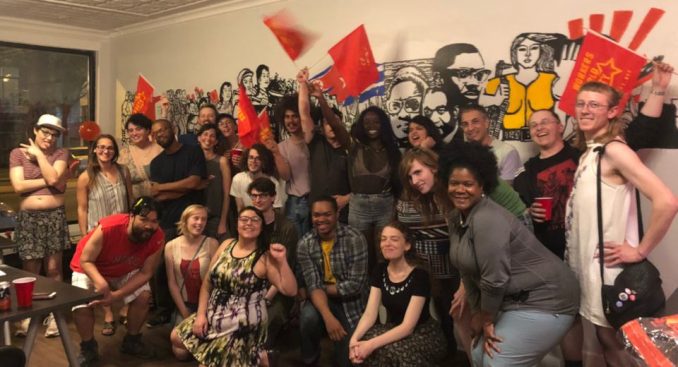 Over 50 neighbors, friends and comrades joined in a party and cookout on June 15 to celebrate the grand opening of the Chicago Solidarity Center.

The storefront office and meeting site is located in the multinational Noble Square neighborhood two miles from Chicago’s Loop. The racks of revolutionary literature along the CSC walls make clear that this space will serve as an organizing center for the struggle against white supremacy, imperialist war, economic exploitation and all forms of oppression. “Although this space is run by members of Workers World Party, the Chicago Solidarity Center belongs to the people,” Cambria York, one of the hosts, explained to inquiring guests.

One activity will be a fundraising event at the CSC on July 15 for an art contest to be held in the Greater Grand Crossing community on Chicago’s South Side. The contest will encourage community residents to share what they love about their neighborhood, as well as raise awareness about the nearby Confederate monument in Oak Woods Cemetery, which Smash White Supremacy is working to get removed.

Beautiful murals on the CSC walls, including Andi Shihadeh’s 15-foot collage commemorating 100 years of socialist revolution, portray the center’s purpose: to promote solidarity among workers, oppressed peoples and immigrants in the struggle for a better world. Attendees gathered in front of that mural at evening’s end to chant “Build a workers’ world!”

The CSC is available for progressive organizations to hold meetings and forums there.

To book the CSC, ­simply submit the form at ­chicagosolidaritycenter.org/request-space.