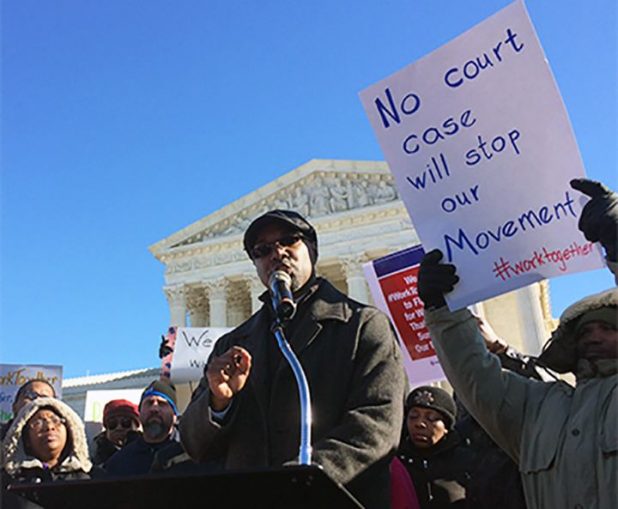 June 27 — Today the Supreme Court of the United States delivered a major attack on organized labor, ruling in favor of Mark Janus, a 65-year-old white male child-support specialist who joined a lawsuit against American Federation of State, County, and Municiple Employees District Council 31 in Illinois. The closely watched case, Janus vs. AFSCME, centered around “agency” or “fair share” fees that public sector unions can charge workers in their bargaining units who choose not to join the union.

The court’s decision overturns Abood vs. Detroit Board of Education, which allowed government bodies to require employees to pay their share of the cost of representing them — as long as the money was not used to support political candidates or “ideological” positions.

The 1977 Abood decision stated that, because public sector unions are legally obligated to represent members and nonmembers alike, charging agency fees did not violate the First Amendment. Since then the National Right to Work Committee and other right-wing groups have continued to finance cases that raised bogus “free speech” issues in an effort to reverse Abood. Up to this point they were unsuccessful. Their Trump card in Janus was recent appointee Justice Neil Gorsuch.

Even before today’s ruling, agency fees could not be required in the 28 “right-to-work” states. In the 22 other states, the ruling now affects 5.2 million public sector union workers. Essentially all public workers in the country will now be forced to work under open shop conditions — meaning “free-riders” can avoid contributing to the union, cutting into union power.

The original plaintiff was not Janus but Illinois Governor Bruce Rauner, who sued to have the agency fees declared illegal. Three state employees, including Janus, joined the case. Janus became the lone plaintiff after a court ruling that the governor could not sue because he was not a union-represented employee, and later the other two state workers dropped out.

Janus is no accidental activist simply trying to keep a few extra dollars in his paycheck. In his own words, he was “forced to support a government union as a condition of employment” and argues: “This is a gross violation of my First Amendment rights to free speech and freedom of association. … What is unfair and unconstitutional is forcing me and millions of other American workers to pay to advance policies we oppose.” (Chicago Sun-Times, June 24)

But the only “policies” these fees can legally pay for are better pay, benefits,  working conditions, and fair treatment on the job.

The high court’s outrageous ruling has deemed it a First Amendment violation for the state of Illinois to make Janus pay the union that negotiated his $70,000-a-year salary and benefits.

As AFSCME explained before the decision, “If fair share fees are struck down, employees who benefit from the gains that the union makes will not have to pay anything toward the cost of that representation. If the billionaires and corporate CEOs behind this case get their way, they will take away the freedom of working people to come together and build power to fight for the things our families and communities need: everything from affordable health care and retirement security to quicker medical emergency response times.” (AFSCME.org)

Studies show that when workers have unions, the inequality gap between women and workers of color — including large numbers of public sector workers — is reduced  compared to white male workers. Is this the “speech” that Janus and his well-funded backers object to?

Had Janus lost the case, he still would not be out of pocket even a penny. The Chicago-based Liberty Justice Center and the National Right to Work Legal and Defense Foundation represented Janus pro bono. The latter, a tax-exempt nonprofit, is the legal arm of the National Right to Work Committee. Founded in 1955, its first president was former Congressman Fred Hartley, co-sponsor of the notorious union-busting Taft-Hartley Act. Other officers were leaders in the John Birch Society. Current funders include prominent right-wing donors such as the Koch brothers, the Bradley Foundation, the Coors Family and Walmart.

Not a death sentence for labor!

AFSCME and other government unions are rightly worried that the loss of agency fee income will push them into a major financial crunch, limiting their ability to adequately represent members. But unions aren’t throwing in the towel.

While SCOTUS has dealt organized labor a heavy blow, the surge of education worker strikes — many of them illegal — has demonstrated the resilience of those workers already in a compulsory open shop. These strikes have all been in states that ban agency shops — that can represent workers in the public sector— as well as banning union shops — where union membership is a condition of employment — in the private sector. Some of these states even bar public workers from collective bargaining.

The victories gained since the education workers’ strike wave began in West Virginia have been of major significance. Some have gone beyond typical bargaining issues such as pay, benefits and seniority. Strikes have pushed back the expansion of charter schools and Teach for America and have boosted school funding.

When workers are presented with this evidence of struggle and victory, it may not be hard to win over those not currently union members to the need to join a union.

For public and private sector workers alike, the union is their first line of defense when faced with aggressive, anti-worker bosses and their friends in high places — including the highest court in the land.

An immediate response to the Janus ruling came from the United Electrical workers union: “Public workers will continue to organize and defend our rights to decent living and work standards despite court decisions and laws forbidding ‘fair share’ fees.”

The UE statement continued: “Vocal and militant actions by UE public-sector members and locals around the ‘right to work’ South show the possibilities available to public workers to continue to defend and improve their working lives.” (ueunion.org) Numerous other union statements are echoing this  optimism.

Narrow business unionism and class collaborationism could be casualties of Janus if unions are given no choice but to return to class struggle unionism of past decades. That’s what it took to win the right to organize in the first place.

This week the Supreme Court also upheld Trump’s xenophobic, Islamophobic immigration ban and undermined reproductive rights. Earlier this month the court allowed businesses to discriminate against the LGBTQ community under the cover of religion.

A united, militant mass movement can turn back Janus and all of these temporary setbacks.

Grevatt is a 30-year United Auto Worker Fiat Chrysler worker and serves on the executive board of UAW Local 869.