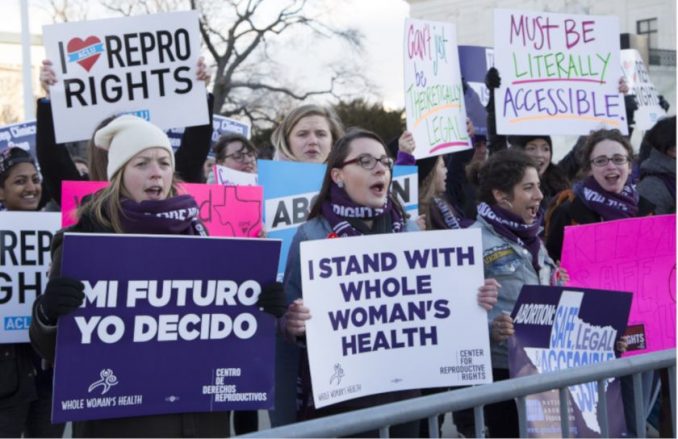 The court in a 5-4 ruling, written by Justice Clarence Thomas and supported by the four conservative justices, affirmed the so-called First Amendment rights of “crisis pregnancy clinics” (CPCs) and gave them permission to continue lying to and emotionally bribing, manipulating and coercing mostly poor women, often women of color, to keep unplanned pregnancies.

The case, National Institute of Family and Life Advocates (NIFLA) vs. Becerra (California’s attorney general), was brought in 2015 by NIFLA to defend approximately 200 such CPCs in the state of California. The state had then just passed a law that required the centers to make specific disclosures to their patients or in their advertising.

As part of the testimony the California legislature heard before formulating the law, women aired their many negative experiences at CPCs, and clinicians discussed problems imposed when pregnant women who want to have a child don’t receive essential prenatal health care right away.

The law stipulated that centers licensed to provide medical services had to post notices to inform patients that they could obtain free or low-cost abortions by calling the phone number of the state agency that would connect them to state licensed abortion and reproductive health care providers. The unlicensed centers had to post 29-word disclaimers in advertisements — in some cases in up to 13 languages — that their services do not include medical help.

The NIFLA argued that both requirements violate the First Amendment for licensed centers because requiring such information conflicts with their anti-abortion message and singles them out in a “gerrymandered” fashion. And for unlicensed centers because requiring such extensive disclosures would make it “almost impossible to spread their anti-abortion message.”

According to a 2010 NARAL Pro-Choice California investigation of clinics in the state, 41 percent of counties did not have an abortion provider (that number is lower now), while 91 percent had at least one CPC. The majority of CPCs are located in rural areas, and those CPCs in urban areas tend to target primarily low-income women of color.

Of the centers investigated, 70 percent wrongly advised clients that abortion increases the risk of breast cancer, while 60 percent incorrectly claimed that condoms are ineffective in reducing pregnancy and sexually transmitted infections. (Rewire.News, March 20)

Concluding that both kinds of CPCs “are likely to succeed on the merits of their claim that the FACT Act violates the First Amendment,” the Supreme Court reversed the 9th Circuit Court’s ruling in favor of California and sent the case back to lower courts for new proceedings in light of today’s ruling. An appeal is definitely in order.

Justice Stephen Breyer wrote the dissenting opinion, joined by the three liberal justices, Ruth Bader Ginsburg, Sonia Sotomayor and Elaen Kagan. Breyer contended that both requirements for notices would pass constitutional muster. As for the licensed centers, he argued that if a state can require a licensed clinician to notify a woman seeking an abortion about adoption as an alternate option, why can’t the state also require a pregnancy center to tell a woman about abortion?

As Breyer summarized in his dissent: “[W]hat is sauce for the goose is normally sauce for the gander.” With that, he was arguing for “informed consent,” a longtime requirement for women’s health care services, which originated with the publication of “Our Bodies, Ourselves” in the early 1970s.

As for unlicensed centers, he said it was “self-evident that patients might think they are receiving qualified medical care when they enter facilities that collect health information, perform obstetric ultrasound or sonograms, diagnose pregnancy and provide counseling about pregnancy options or other prenatal care.” Breyer noted the requirement that unlicensed facilities provide disclosures in multiple languages would not be unconstitutional or impose an “undue burden” when only two languages — English and Spanish — would be required in “the vast majority of California’s 58 counties.”

Even before the Supreme Court legalized abortion with the Roe v. Wade decision in 1973, evangelical Christians and Catholics opposed to abortion began “sidewalk counseling” outside clinics to dissuade women from having abortions. When that wasn’t effective, abortion adversaries began setting up fake clinics near hospitals and licensed health clinics (to confuse potential clients) and in poor Black and Brown neighborhoods.

Many women, desperate for convenient, low-cost health care, do not know the difference between a CPC and a licensed abortion clinic. Some CPCs offer free pregnancy tests and ultrasounds, while staff dress in scrubs and provide individual counseling. Clients receive false information like having an abortion could prevent them from having a later pregnancy, that it causes breast cancer or may lead to suicide. One woman told HuffPost that she was grilled about her sex life, including when she lost her virginity, and she came away feeling ashamed and ridiculed.

In some states such as Texas and North Carolina, fake clinics receive state funding. A May 24 Rewire.News article reported that fake clinics in Texas outnumber abortion providers 10 to 1 and 50 have been receiving state funding since 2005. An April 26 article in Rewire.News detailed that the North Carolina legislature has (illegally) directed $400,000 annually for the current year and the next from its federal Maternal and Child Health block grant to the Carolina Pregnancy Care Fellowship, an umbrella group of “faith-based” centers, which according to their bylaws are expected to abide by “biblical principles.”

A number of news sources have noted that this conservative 5-4 ruling, like others issued this spring, would not have happened if the Republican-controlled Senate had not refused to consider President Obama’s liberal nominee, Merrick Garland, to replace archconservative Justice Scalia who died in February 2016.

Instead the racist, sexist, white supremacist reactionary in the Oval Office was able to appoint anti-worker, anti-people-of-color, anti-women, anti-LGBTQ Neil Gorsuch to the court, who has indeed done the Trump administration’s right-wing bidding in case after case this spring.

But the conclusion to draw from this is not to feel depressed or defeated by this series of court-imposed losses for the 99%, but to be mindful that Trump administration functions at the bidding of the 1% — the ruling class made up of bankers and corporate magnates who are pulling his strings. That’s how patriarchal capitalism functions.

And the ruling class is oblivious to, in fact ignorant of, the dialectical materialist law that repression sparks resistance.

As the broad anti-people Trump agenda continues to be revealed — from white supremacist rage and murder in Charlottesville last summer to today’s merciless, heartless catastrophe of im/migrant family separation at the border — the peoples’ movement has now been emboldened in take to the streets all over this country and the world in resistance.

In the past few years reproductive justice advocates have become bolder and more vocal and visible as they have become Blacker and Browner. Protecting and promoting families is one of the core human rights at the heart of the reproductive justice movement. Now is the time to link arms in resistance with allies in the struggle to counter our common enemy and defend the human rights of all working and oppressed people.