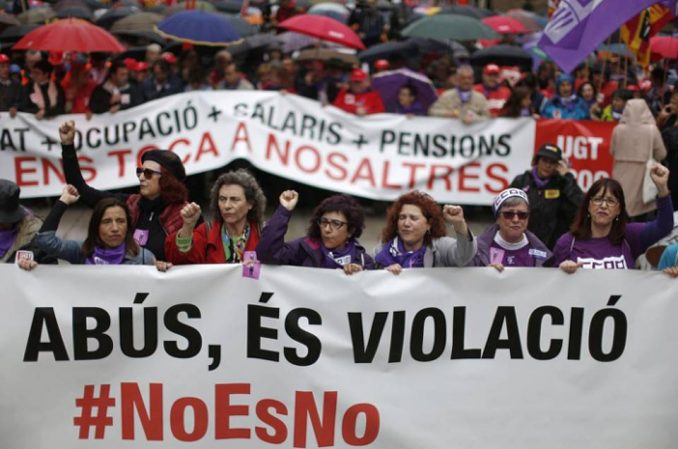 Proudly, the workers of the world marched on May Day. Millions walked out of the factories, fields and offices to stand with their class sisters and brothers. As members of the global multinational, multigendered, multigenerational working class, they showed their strength and solidarity.

As capitalists the world over impose austerity programs, with layoffs, speedups and salary cuts — and try to weaken the power of organized labor — workers are standing up. Where imperialist companies super-exploit workers to maximize profits, paying semi-starvation wages, many are defying the bosses, demanding unions, livable salaries, permanent jobs and basic rights. Migrant workers, many of them women, confronted by racism and abuse, are making their voices heard.

May Day began during the period of labor militancy in the 1880s in Europe and the U.S., when workers demanded the 8-hour day. Unions organized a general strike; hundreds of thousands of workers joined U.S. rallies on May 1, 1886. Some 30,000-40,000 workers left their job sites in Chicago alone.

For many in the global workforce, the fight for the 8-hour day continues. On this May Day, labor unions, social justice groups, socialists, communists and other progressive forces organized and joined demonstrations. Some red flags, posters of Che Guevara and portraits of Karl Marx were visible. Notably, defiant workers rallied, despite police attacks. Here are highlights of global May Day actions.

Elsewhere in Europe, workers marched in Italy and Austria, carried red flags in Denmark, and rallied in former socialist countries, including Poland and Russia.

More than 7,000 members of the General Union of Tunisian Workers celebrated in Tunis. They hailed their union’s commitment to fighting for their right to secure jobs and benefits and its opposition to privatization, abuse and oppression. The union has 750,000 members from many industries and public sectors, and is organizing agricultural workers, mainly women.

Thousands of workers and activists rallied across Turkey, including in Ankara and Istanbul, for higher pay and improved working conditions — and denounced the Erdoğan regime’s repression. Left-wing unions protested privatization and other anti-labor policies. Sixty people were arrested as they chanted, “Long live May 1!” and attempted to defy a government ban by marching to Taksim Square, site of a 1977 police massacre of 40 demonstrators.

In Damascus, Syria, the General Federation of Trade Unions celebrated May Day, honoring workers, including martyrs of today’s civil war. Also honored were Syrian army victories in this war.

In Gaza, hundreds of Palestinians called for an end to the horrific U.S.-backed Israeli siege and the resulting “humanitarian disaster” — deteriorating economic conditions of their people.

Dhaka, Bangladesh, was the site of many demonstrations. Thousands of workers, backed by 14 organizations, demanded a monthly minimum wage of 18,000 TK ($213), unionization, an 8-hour day and workplace safety. The Communist Party of Bangladesh waved red flags. The government denies garment workers’ calls for higher wages in order to benefit profit-seeking global brands.

More than 10,000 Korean Confederation of Trade Unions members assembled in Seoul, South Korea, demanding a higher minimum wage and change of “non-regular employees” to “regular employee” status, with equal pay and treatment. A slogan was: “Rewrite the constitution based on labor rights!” The KCTU-Migrant Trade Union held a separate rally on April 26 for migrant workers.

Elsewhere in Asia, workers rallied for their rights throughout Pakistan; garment and shoe factory workers marched in Yangon, Myanmar; thousands of union members were out in Taipei, Taiwan, while 10,000 unionists demonstrated in Jakarta, Indonesia, for better wages and working conditions, permanent jobs and free health care.

Haiti: ‘Holiday of Agriculture and Work’

Workers marched on May 1 through Port-au-Prince, Haiti, to demand a three-fold increase in the daily minimum wage from 350 gourdes ($5.38) to 1,000 gourdes ($15.36). The Confederation of Haitian Workers, the National Central of Haitian Workers and other unions led the demonstration. (Haiti Liberté, May 2) The Trump administration has intensified racism against Haitians in the U.S.

In Guatemala City and Mexico City, thousands demanded jobs and improved pay and working conditions. At the same time, the bigoted, anti-immigrant Trump administration stopped a caravan of Central Americans, mostly women, LGBTQ individuals and children, at the U.S.-Mexico border.

Police used tear gas and water cannons against demonstrators in Tegucigalpa, Honduras. In that city and two others in the country, workers protested the fraudulent Nov. 26 election of pro-U.S. President Juan Orlando Hernández.

Thousands of workers from throughout Venezuela gathered in Caracas for a massive march and rally supporting President Nicolás Maduro’s reelection and the Bolivarian Revolution. They said “No” to imperialist sanctions and interference.

Maduro hailed workers’ gains, particularly those outlined in the Organic Law of Work and Workers, and announced a 95 percent minimum wage increase. He vowed, “We are going to contain [imperialism’s] brutal economic war and we will move forward.” (TeleSUR, May 1)