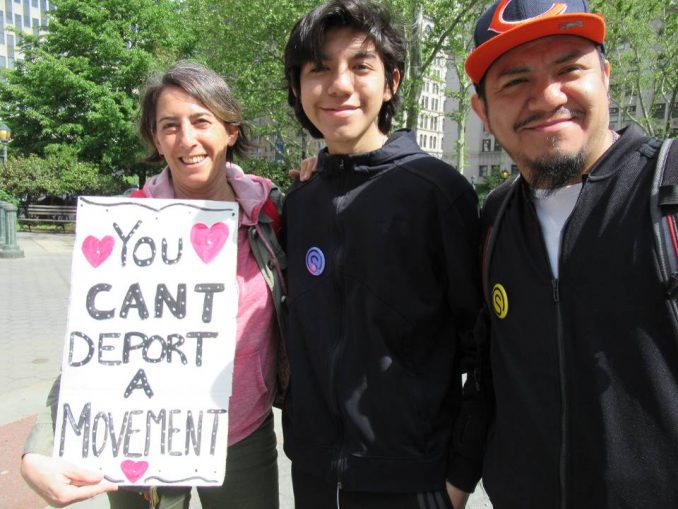 “As [immigrants] become a target … we are here to protect!’ said Ravi Ragbir, a co-director of the New Sanctuary Coalition in New York City, at a Manhattan press conference on May 11 outside U.S. Immigration and Customs Enforcement headquarters.

Ragbir was detained just months ago, not only for being an immigrant, but also, many believe, because he is a leader in defense of the sanctuary movement for immigrant rights. Thanks to the organized support of many, he won a temporary stay in February, just hours before he was to be deported to Trinidad and Tobago.

The May 11 event attracted a large number of supporters and media. As speakers told why the New Sanctuary Coalition advocates for abolishing ICE, sanctuary members — said to be a “voice of the voiceless” — wore buttons displaying a large S. Speakers included immigrants who were recently released from ICE custody and relatives of the abducted or disappeared, all victims of racist discrimination.

A former Honduran soldier, who escaped from his home country with his mother, described how he fears political execution in Honduras. Fifteen-year-old Marco of Queens, N.Y., recounted the pain of losing his recently detained mother: “I have lived with her all my life!” Guadalupe, a Latina born and raised here in the U.S., spoke of the deep pain in having to choose between living with a parent here or leaving the country to stay with her other parent in Mexico, who was deported there. She said, “We all have to be strong!”

Other New Sanctuary Coalition speakers read the names of the abducted and disappeared. The group has helped to free three people from detention in the last month.

The coalition also exposed the Intensive Supervision Appearance Program, which imposes scary restrictions on a person’s freedom and rights. These including wearing a GPS ankle monitor, a 12-hour home curfew, three meetings with a so-called caseworker, and the unceasing stress of unannounced calls and visits. ISAP may also require the installation of voice-recognition technology on phones.

Activists handed out fliers describing how ISAP operates via the privately owned BI (Behavioral Interventions) Incorporated, based in Boulder, Colo. According to the Center for Effective Government, the company has had $40 million worth of contracts with ICE since the program began in 2004.

What is also alarming is how ISAP hides its operations. Advocates and lawyers are not allowed to accompany their friends or clients to an ISAP “check-in.” When an immigrant brings an advocate with them, the ISAP representative — who is called an officer — threatens to return them to jail.

ICE profits off ISAP’s oppression. According to its 2008 budget, ICE spends $95 a day to detain an immigrant in a prison, compared with only $12 a day under ISAP.

As Ragbir eloquently stated today, “Everyone here has to put bodies on the line to protect victims!” He inspired a cry raised by all: “No detentions! No deportations! Not one more!”