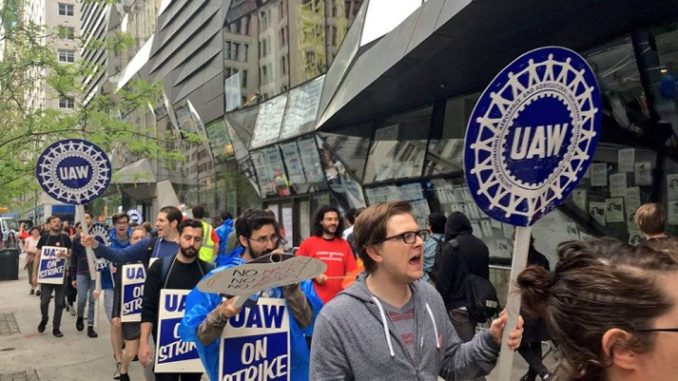 New York — Students at the New School here have occupied their cafeteria since May 1 in solidarity with cafeteria workers under attack by a union-busting administration and with graduate student workers fighting for a contract and livable wage.

When the New School administration announced it planned to lay off all cafeteria workers, represented by UNITE HERE Local 100, and have them reapply for their jobs, with most positions to be filled by students, students sprang into action to defend the cafeteria workers. They occupied the cafeteria, demanding no workers be laid off. Students rejected this racist, union-busting attack on Black and Brown workers with the slogan, “All of Us or None! Every Single Job!”

The workers announced May 10 that they had reached an agreement ensuring that every cafeteria worker would continue to have a job at the New School and setting dates for contract negotiations.

In addition to the struggle in the cafeteria, graduate student workers, represented by the Student Employees at the New School-United Auto Workers, have been fighting for a contract since 2014. Graduate student workers keep the New School running by teaching and assisting courses, grading papers, tutoring students and carrying out research, yet, for what is often a full-time job, they are paid part-time poverty wages with no health care benefits.

After four years without a contract, graduate student workers went on strike May 8-13, setting up picket lines at New School buildings and demanding a fair contract that will include a livable wage and health care.

The strike has forced economic conces­sions from the administration, but its pro­posals, particularly on health care, remain unsatisfactory to the graduate student workers. Negotiations are expected to continue. See Facebook (facebook.com/SENSUAW) and Twitter ­­(@SENSUAW) for updates on the struggle.