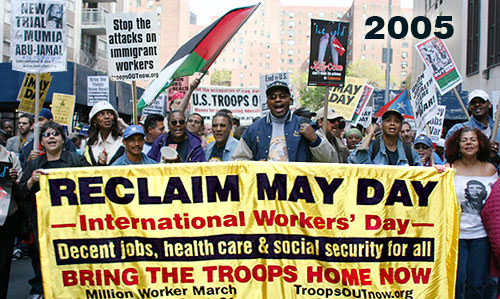 They are streaming out of their schools into the streets, into the halls of state government, to confront the vicious attacks of “right-to-work-for-less” right-wing billionaires intent on gutting public education and on attacking the public good. They are marching from West Virginia to Kentucky, from Oklahoma to Arizona, Wisconsin to Georgia and beyond.

Will this surge of action continue and spread to other workers in other jobs and locations? The answer is in our collective hands.

First and foremost, we can and must build unbreakable strength in workers’ struggles by forging solidarity with other workers. We must be at each others’ sides in the battles against white supremacy; assaults on refugees and im/migrants; woman-hating, Islamophobia, anti-LGBTQ attacks; disrespect and barriers for people with disabilities.

We must pledge to each other: “I will fight for you as if your struggle is my very own. Because it is!”

That means providing material and real solidarity to refugees and im/migrant workers being kidnapped and jailed every day by Immigration and Customs Enforcement from California to upstate New York. That means joining with Black Lives Matter to demand justice for victims of police terror; to defend Black workers, being targeted by white supremacists, who are arrested for just sitting in a Starbucks in Philadelphia; or shot down while working at a Waffle House in Nashville, Tenn., or worshipping in the very church of freedom fighter Denmark Vesey in Charleston, S.C.

We must defend women who are given the inhuman choice of rape and sexual assault or their jobs, from farm workers to film actors. We must fight to guarantee workplace protection for lesbian, gay, bisexual, trans and queer people and to overturn still-existing, vile anti-LGBTQ laws.

As the U.S. government and military continue to mobilize anti-Islam bigotry to ramp up attacks on people in the U.S. and also build for war on Syria and Iran, we must expose how the war budget bleeds the life out of all workers, draining money for health care, education and retirement hopes.

We must spread the word to all workers that people with disabilities are endangered to the point of losing their lives by such austerity measures as requiring people to work to get Medicaid, cutting school budgets so there are fewer special education aides or slashing accessibility in public transportation.

On a practical level, this May Day solidarity can be carried out in everyday actions, with support for workers’ rights in pro-worker “picket lines” wherever we are, to marching and rallying weekly in solidarity with local struggles. We can make visible that “I am fighting for your struggle as my very own.”

Hope is already visible in how connections between struggle movements are being made in every current of liberation. In the Black Lives Matter movement, the entwined violence facing women of color has been brought to the fore by #SayHerName actions. Many of the overwhelmingly female striking education workers in West Virginia and Oklahoma have cited the 2016 women’s marches as inspiration. In the recent demonstrations sparked by the massacre at a Florida high school, young people have militantly raised issues of school-to-prison pipelines, racist police, state violence and U.S. imperialist war as inextricably tied to “gun violence.”

We can study and learn from the hundreds of years of resistance recorded in rebellion after rebellion of enslaved people of African descent in the U.S. — Stono in South Carolina, 1739; New York City, 1741; the German Coast in Louisiana, 1811; Nat Turner in Virginia, 1831; and countless unrecorded others. We can learn resistance from Haiti in 1804 — when enslaved people won their freedom by waging their own war of liberation.

We can take heart in the resistance of May Day 2005 by the Million Worker March Movement. Begun by class-conscious Black labor unionists on the West Coast, East Coast and U.S. South, and endorsed by Workers World Party, this action targeted May 1 to affirm that workers must fight independently in their own name, unchained from the Democratic and Republican parties. (See the flier in this issue about the port-closing action this May Day by the International Longshore and Warehouse Workers Local 10.)

We can take heart, lessons and inspiration from the historic revival of May Day 2006 with strikes led primarily by low-wage and im/migrant workers throughout the U.S., ignited by the reactionary Sensenbrenner bill. The state of California was essentially closed down in a general strike that May Day, while millions marched nationally. This massive action was organized by workers from the Caribbean, Mexico and Central America, who were battle-honed in the struggle against devastation in their home countries by U.S. economic and military imperialism over two centuries of blockades, “free trade” monopoly, invasion and occupation.

Now all workers in the U.S. are attempting to survive the ruin from those same “austerity” economics. The privatization schemes of big banking and finance are stealing systems that had been won for the people’s common good. Capitalist exploitation is destroying water systems, transportation systems, education systems from Detroit and Flint, Mich., to Puerto Rico.

Meanwhile, white supremacy is being viciously mobilized by the anti-worker forces of capitalism in a last-ditch attempt to keep us from uniting and fighting for each other. We have to topple white supremacy as surely as the freedom fighters of Durham, N.C., toppled a racist monument!

May Day is an international call to abolish capitalism and replace it by a socialist system that will empower all workers regardless of nationality, gender, gender identity, sexual orientation, abilities, age, skills, whether employed or unemployed, in a union or fighting for one, working in the home or working in the gig economy.

As more and more of our class — the multinational, multigenerational working class — develop a deeper hatred of capitalism and more openness to building a socialist society that puts human needs first, solidarity is our best tool and our best weapon.