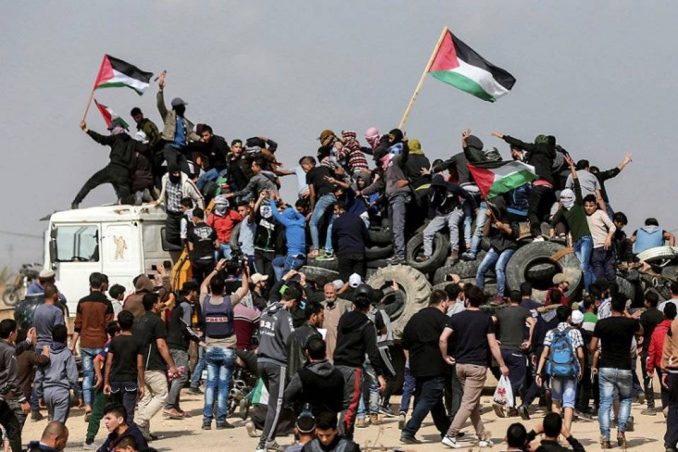 Armed only with strong voices and boundless determination, thousands of Palestinians from Gaza challenged for the fourth straight week the Israeli fence on April 20 that has imprisoned nearly 2 million of them in a tiny enclave. With shoot-to-kill orders in hand, snipers from the so-called Israeli Defense Forces killed four more protesters, including a 15-year-old boy. The tally for the wounded was 729, including 159 struck by gunfire, according to the Gaza Health Ministry. (Chicago Tribune, April 20)

Since March 30, which is Palestinian “Land Day,” commemorating the day in 1976 when Israeli police shot six Palestinians protesting Israeli land seizures, thousands of Palestinians have marched every Friday to the border fence with Israel.

Since then, at least 32 have been killed by Israeli soldiers, including disabled activist and journalist Yasser Murtaja, and more than 1,600 have been wounded, including many children.

Israel and Egypt have blockaded Gaza by land and sea since 2007, denying its citizens key supplies, including medicines. Electricity is available only five hours a day, and unemployment is above 40 percent for Gazans.

The Friday marches are organized by the liberation organization Hamas, which not only demands an end to the blockade, but also asserts the right of the Palestinians to return to their homeland. The protests are slated to culminate May 15, which Palestinians mark as “Nakba,” or “ the catastrophe,” the date in 1948 when thousands were driven from their homes during Israel’s creation as a garrison state. The Palestinians call this current struggle the “March of Return.”

“We will stay here until we reclaim our lands,” said Ahmed Nasman, 21, speaking in a protest tent camp east of Gaza City. Activists near him prepared to fly kites over the fence. “Every day, we will come here with a new way to resist them.” (miamiherald.com, April 20) “Them” refers to Israel.

The brave resistance by the Palestinian protesters, in the face of more than a hundred Israeli snipers and other soldiers armed to the teeth by the U.S., has won worldwide support. Nickolay Mladenov, the U.N. special coordinator for the long-stalled peace process between the two states, said on Twitter: “It is outrageous to shoot at children! How does the killing of a child in Gaza today help peace? It doesn’t! It fuels anger and breeds more killing. Children must be protected from violence, not exposed to it, not killed! This tragic incident must be investigated.” (ABC News, April 21)

Israeli-born, Oscar-winning actor Natalie Portman announced on April 21 that she was turning down the million-dollar Genesis Prize because she did not want to be on the same stage as Prime Minister Netanyahu. “The mistreatment of those suffering from today’s atrocities is simply not in line with my Jewish values,” she said. (reuters.com, April 21) Organizers were forced to cancel the event.

In the U.S., pro-Palestinian demonstrations have erupted in cities across the country, protesting the Israeli atrocities against the Gaza residents. Eight members of the Jewish youth group called IfNotNow were arrested when they chained themselves to the door of the Israeli consulate in Boston on April 3. Seven members were arrested on April 9 outside the New York City office of Sen. Chuck Schumer. Nine more members were arrested on April 13 for blocking the doors to the San Francisco office of Sen. Dianne Feinstein.

In Israel itself, activists from the group Boycott from Within confronted Israeli soldiers near the Gaza fence. “Aren’t you ashamed of massacring civilians?” an activist asked a soldier, who responded by asking him to put his camera down. “No I can’t,” replied the activist. “You are a terrorist and I’ll take your picture. Are you proud of what you do? A soldier in the army of terror?” (Times of Israel, April 11)

Students at Barnard College in New York City, by a margin of nearly 2 to 1, voted yes April 18 to a referendum demanding that the school divest from U.S. companies that profit from Israel’s violation of human rights. These include Hyundai Heavy Industries, Caterpillar, Lockheed Martin, Boeing, Elbit Systems, Hewlett Packard Enterprise, Bank Hapoalim and Mekorot. Barnard has the largest percentage of Jewish students of any secular school in the country.

This is a tremendous victory for the Boycott, Divestment, Sanctions movement that targets U.S. complicity with Israeli atrocities. A similar vote for divestment will take place at George Washington University on April 23.

It was the Trump regime’s decision, announced in February, that the U.S. would move its embassy to Jerusalem that emboldened the Israelis to use such vicious repression against the Palestinian protesters in Gaza. The U.S. blocked a U.N. investigation into the Israeli killings April 1.

It is time for every progressive in the U.S. to demand that Washington stop its support for the racist Israeli regime and remove itself entirely from the Middle East.