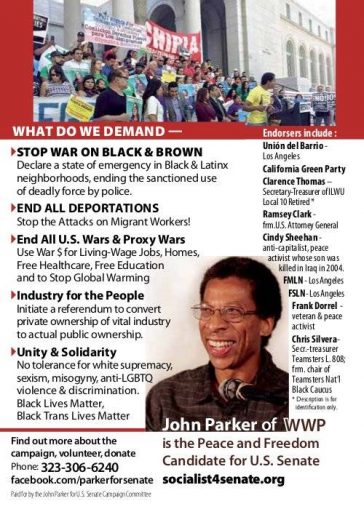 The following edited statement was issued by John Parker, a leader of Workers World Party and the current Peace and Freedom Party candidate for U.S. Senate in California.

I’m not running to legitimize this system or the election process, or to give any false hopes that being in office allows you to change anything. Change takes the power of the people’s movement, independent of the influences of the ruling class.

In order to stay in office, you have to play to the tune of the ruling class, because it’s their structure and their laws. They prohibit any revolutionary changes that make a real difference in the progress of society. However, just in case I do get elected, I can, as any politicians who say they are progressive can, use the amplified voice I would have to expose, expose, expose — not only the influence of the financial and industrial monopolies who run the politicians, but the war crimes, crimes against humanity and crimes against our class both here and abroad.

For example, I’d expose the fact that 8 million people from Yemen are expected to starve to death directly because of the U.S. war in cooperation with Saudi Arabia, while every few hours, Black and Brown people are murdered by racist genocidal police who should be jailed immediately, along with the police chiefs who enable them. And I’d expose the real reason that jobs and livable wages are being kept from us, and the simple solutions to these problems that are not allowed by the banks and corporations. In other words, I’d use that position to motivate the movement to take over the reins of power.

I’d probably be able to do that for a very limited amount of time — but it is the only thing I should be doing. Stopping global warming, endless wars by the police, Immigration and Customs Enforcement and the Pentagon, and stopping racist, sexist and anti-LGBTQ violence all begins by exposing the forces that allow them to continue and empowering the people to act outside of the boundaries of what’s acceptable. It’s the only thing these so-called progressive politicians should be doing in office — but instead they are enabling and encouraging compliance with this system.

Perhaps my first day in office could be to start the groundwork amongst grassroots and progressive organizations on the left to work on mobilizing an occupation of the White House that was sustainable and could last for months. After the groundwork was laid, maybe I’d call a press conference and make a public call for the occupation. That would probably be my last day in office, but that short time in office and the grassroots organizing I would have done would make a greater contribution to our struggle than any of these enabling politicians in office today. And, who knows — depending on the state of the movement in the streets, maybe I’d be able to stay a little while longer. That’s just one “for instance,” there are many more.

In thinking about any electoral struggle, it’s important to understand that the executive and legislative branches of government have been rigged to ensure the status quo since the late 1800s. That’s when the money of the Rockefellers, Vanderbilts, Mellons and Morgans, to name a few, locked up the system with the enormous profits they gained from cotton production — in other words, slavery. Over 90 percent of the time, whomever the largest financial and industrial monopolists favored with their donations won.

Even in this election of Trump, in which he was supposedly outspent (but not if you count the free media he got), the ruling class could have used the electoral college any way they wanted to change results — but I think they liked those promised tax cuts. In history, the Electoral College was used for that purpose, and was also used to help end Reconstruction.

The electoral struggle has to be used as a means to a revolutionary end — not to enable acceptance of this unacceptable system of capitalism. The electoral struggle should not be a struggle for a career; it should be seen as one of the many tools that can be used to expose and abolish capitalism. The measure of my success is not winning the office of senator, if that could happen — and I guess in an infinite universe, anything can happen.

But I’m running to win our future. I’m running to quicken the pace of the revolutionary process liberating humanity from exploitation, oppression, poverty and war. I need your vote to do that.

Let’s show others that our numbers are large and the revolutionary waters are warm, so they will feel compelled to come on in and start swimming. Whatever we do, we can’t continue to accept and enable the unacceptable.