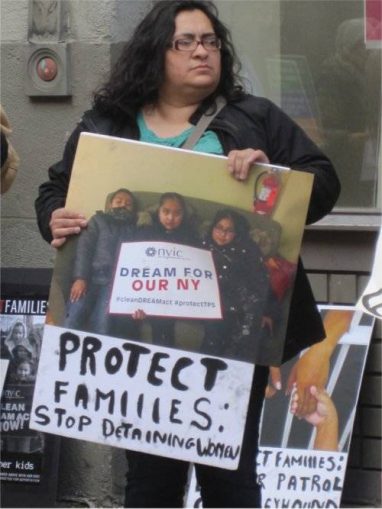 Syracuse, N.Y. — Dairy worker Marcial de León Aguilar was kidnapped from a farm in Rome, N.Y., on April 18 by seven armed agents of Immigration and Customs Enforcement. A protest to mobilize for Aguilar’s release was held April 20 in front of ICE offices in Syracuse, called by the local Immigrant and Refugee Defense Network and the Workers’ Center of Central New York.

John Collins, the farmer who employed Aguilar, witnessed the kidnapping. So did two of Aguilar’s children waiting for the school bus. Collins heard yelling and ran inside a barn to see armed men attacking Aguilar. The men were not wearing ICE jackets and had no warrant or legal paperwork. Collins ordered them to leave Aguilar alone and leave the property. When Collins attempted to photograph the men, they smashed his phone, handcuffed him and threatened to arrest him. (syracuse.com)

Aguilar is partnered with Virginia, a Guatemalan who is seven months pregnant. She is seeking asylum for herself and their children because of violence in her country. Since a 1954 U.S.-backed coup in Guatemala to protect United Fruit Company property, genocidal anti-Indigenous and anti-worker purges have devastated people’s lives there.

While ICE was kidnapping Aguilar in Central New York on Wednesday morning, its agents were also conducting raids in New York City, Long Island and the Hudson Valley, arresting 225 immigrant workers. (ABC7/NY, April 18) These attacks are being justified by labeling the workers as “criminals.”

The racist fabrication of this criminality is clear in two detentions in Central New York in the last two weeks.

Agus Susanto, carrying an Indonesian passport, was seized April 7 waiting for a Greyhound bus at the Syracuse Regional Transportation Center, where the U.S. Border Patrol trolls for travelers of color to detain. Pastor Herrera Núñez was arrested April 16 after being stopped for a “seat-belt violation” by Manlius police and turned over to ICE. Previously Manlius cops engineered the detainment of four immigrant workers after stopping them for “snow obstructing the view of license plates.”

Anti-immigrant raids are ranging deeper and wider, from individual workers and families in rural areas, to groups of urban workers at chain stores like 7-Eleven, to immigrant rights organizers.

Worker leaders have been under increased scrutiny, including Arely Tomás Orozco of Syracuse. In 2014, she was part of a delegation that succeeded in limiting collaboration of New York State Troopers with ICE and the Border Patrol. In December 2017, ICE arrested her partner, Hector Navarro, now in Buffalo Federal Detention in Batavia, N.Y.

The local Immigrant and Refugee Defense Network is demanding an end to deportations, an end to local police collaborating with ICE and the Border Patrol, and an end to racist policing. They ask for support for the Greenlight NY: Driving Together campaign to ensure access to licenses for all. The Defense Network is planning to pack the courtroom for Marcial de León Aguilar on April 24. To support their work, go to Facebook for Workers’ Center of Central New York.