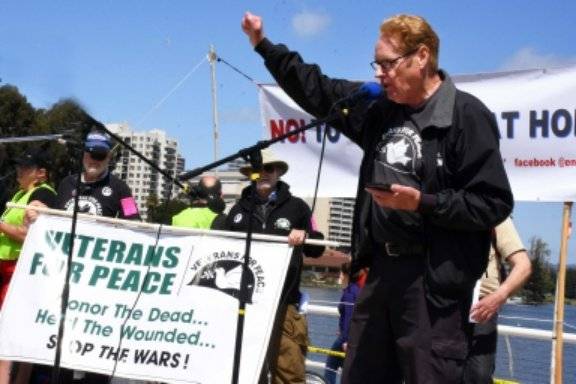 From a talk by Gerry Condon, who is president of the board of directors of Veterans For Peace, given at the April 15 anti-war march in Oakland, Calif.

Veterans For Peace is in the house.  We are marching this weekend in Boston, in New York, in Washington, in Atlanta, in Minneapolis, in Seattle and Portland, in London, and in Oakland and many other places.

We are veterans of World War II, of the U.S. wars in Korea, Vietnam, Afghanistan and Iraq.  We know what it means to be lied into a war on false pretenses. We know who really has the weapons of mass destruction.  We know that it is the poor who pay the ultimate price for the rich men’s wars.

We condemn the U.S. attack on Syria.  It is a gross violation of international law, domestic law and the U.S. Constitution.  We know that the U.S. has been arming and training the so-called rebels in Syria. We know that several thousand U.S. soldiers are now on the ground in Syria, occupying sovereign Syrian territory.

We know that the U.S. and Israel are determined to overthrow the Syrian government and destroy the Syrian state in order to assure their own dominance in the Middle East.

We call on the U.S. to get out of Syria now, to withdraw its military and the CIA and leave Syria to the Syrians.

We also call on the U.S. to end its occupation of Afghanistan.  To stop its drone bombing of Pakistan and Somalia. To stop bombing Libya.  To stop aiding the Saudi government’s bombing and starving of civilians in Yemen.

To stop threatening the people of Venezuela.  To end its embargo of Cuba. And to start closing down its 800 military bases in over 80 countries around the world.

Veterans are very aware also of the militarization of U.S. society.  We stand in solidarity with those who are resisting the epidemic of police killings of African Americans, Latinos and Native Americans. We call for an end to the racist war against immigrants, including even the deportation of veterans.

We call on our sons and daughters, brothers and sisters in the military to refuse to obey illegal orders to participate in war crimes.  The biggest war crime of all is to initiate a war of aggression, based on lies. We will support GIs who have the courage to resist!

Please join with Veterans For Peace.  March with us today. And work with us tomorrow. Our mission is to abolish nuclear weapons and war.

We want peace at home in our own communities.

And we want an end to U.S. warmaking around the globe.

Thank you all for being here today.