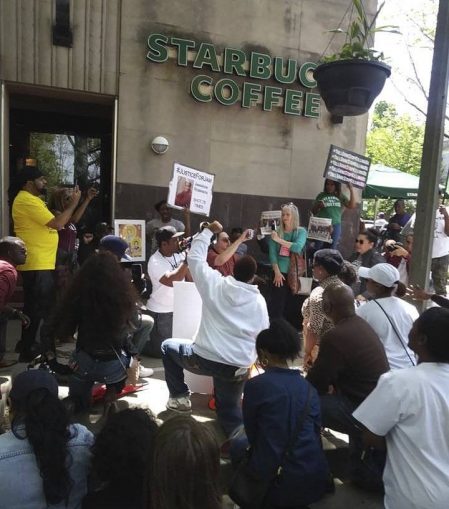 Decatur, Ga. — Hundreds turned out April 21 at the courthouse here to rally for Anthony Hill. The march and rally were called by the recently formed coalition, Alliance for Black Lives, which includes the Atlanta Black Lives Matter chapter, the NAACP, Georgia Alliance for Social Justice, teens from March for Our Lives as well as other organizations.

The goal was to remind the community of Hill’s violent death at the hands of police. Hill had served two tours of duty in Afghanistan in the U.S Air Force. As a result, he developed post-traumatic stress disorder and was also diagnosed with bipolar disorder.

He turned to the Veterans Administration for help, but his prescribed medications brought on terrible side effects. Hill’s creative and outgoing personality, which made him a favorite with the children who lived in his apartment complex, was severely impacted.  He had a long awaited appointment at the VA on March 10, 2015, to review his meds and treatment.

A day before that appointment, Robert Olsen of the DeKalb County Police Department arrived at a Chamblee apartment complex following a call from Hill’s neighbors asking for help for Anthony. He was seen naked, climbing down from his second floor balcony and crawling in the parking lot in front of his building.

Within two minutes of arriving on the scene, Olsen shot and killed Hill. Witnesses say Hill had his hands up and outstretched as he walked toward Olsen.

Although equipped with pepper spray, a taser, billy club and, of course, his police cruiser, Olsen claimed he feared for his life when he shot and killed the unarmed young Black vet.

Olsen was indicted by a DeKalb County grand jury in January 2016 on multiple charges, including felony murder.

Hill’s family and friends have been waiting for over two years for the trial to be scheduled. Pretrial motions were set to begin on April 23, and the April 21 rally was intended to help pack the court. It was announced the day before the solidarity event, however, that legal proceedings have been postponed until late May.

Undeterred, the supporters of justice for Anthony Hill took to the streets of downtown Decatur, ending their march at the courthouse where Olsen will face murder charges.

In another act of anti-racist solidarity, the march stopped for a short protest and took a knee in front of a local Starbucks, highlighting the recent examples of racial profiling that took place at not just one but several Starbucks stores around the country.