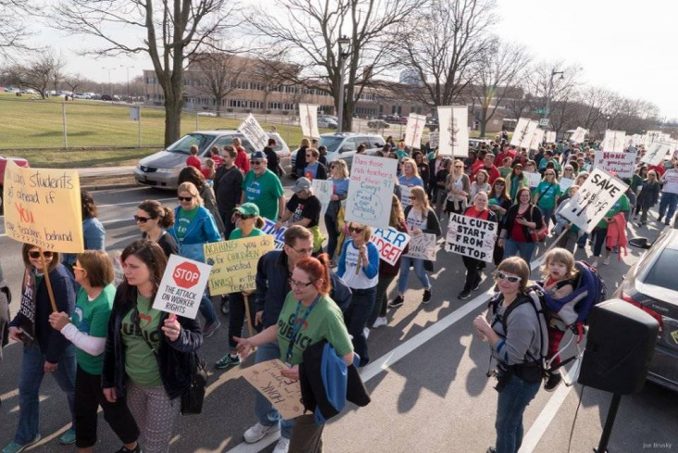 Thousands took the streets in Milwaukee on April 24 to defend public education and to stop austerity in a “Picket to Defend Our Schools” action called by the Milwaukee Teachers’ Education Association (MTEA). A flood of united teachers, students and community members filled and overflowed the area in front of the Milwaukee Public Schools (MPS) central office and stretched for blocks. (www.facebook.com/MTEAunion/)

The MTEA is putting up a valiant fight in many directions against a 5 percent cut to the MPS budget. Milwaukee is a majority Black and Brown city and gets thousands of dollars less per student from state funding than suburban schools. So this is also a mighty struggle by the MTEA to prevent the racist funding inequity from worsening.

Since the late 1980s, Milwaukee has been the laboratory for “school choice” and also “welfare reform” — right-wing initiatives aimed at privatizing education and cutting support for poor and oppressed people. In 2011, the infamous Act 10, the so-called Wisconsin Budget Repair Bill, was proposed by Republican Gov. Scott Walker and passed by the state legislature.  The bill was one of a slate of racist, union-busting, austerity measures pushed by the Bradley Foundation, the Mackinac Center, the Koch brothers and other billionaires.

Since the right-wing victory in 2011, the assault on Wisconsin public services has been used as a model for other austerity attacks. Similar programs were enacted in Indiana and Michigan in particular, and are now being attempted federally, as the U.S. government is desperate for funding for its military expansion. Some politicians maneuvering for austerity cuts at the federal level gained experience at the state level in cutting public service to the bone. Vice President Mike Pence honed his skill at implementing and administering attacks as governor of Indiana.

Strengthening the federal attempt at austerity attacks are increased connections between ruling-class forces, from the South to the North, such as arch right-wing billionaire Art Pope of North Carolina, now chairing the board of the Milwaukee-based Bradley Foundation.

In addition, the predatory role of big banking and finance capital has to be called to account. Banks, having made high-interest loans to beleaguered cities, swoop in to demand cuts to public budgets in order to get blockbuster profits in interest. In the worst situations, as in Detroit and in Puerto Rico, management of public resources is handed over to a board essentially appointed by the banks, with public services like education gutted or turned “for-profit.”

But the thousands in Milwaukee on April 24 are part of a recent defiant national surge of education workers against this ax of austerity.

The most massive education strikes have had success in right-to-work (for less!) states, where public employees are by law denied the right to strike. But, when 400 Georgia school bus drivers began a sickout on April 19 to protest stalled negotiations over pay, health benefits and working conditions that endanger students, eight of them were immediately fired. Hostile Dekalb County school management declared the action to be illegal in the right-to-work state, and appeared to be targeting driver leaders.

Solidarity is needed! What a sight and inspiration it would be if teachers, school staff, students, parents and community supporters would take their yellow school buses in the thousands to Washington, D.C., in June to demand an end to right-to-work for less. That could be an emphatic “no!” to anti-worker rulings like that anticipated from the U.S. Supreme Court in the pending Janus v. AFSCME, a public service employees’ union, case. That could be an emphatic “yes!” to solidarity if they linked up with the Poor People’s Campaign’s June mass action in D.C., renewing the Rev. Martin Luther King Jr.’s call to end racism, militarism and poverty.