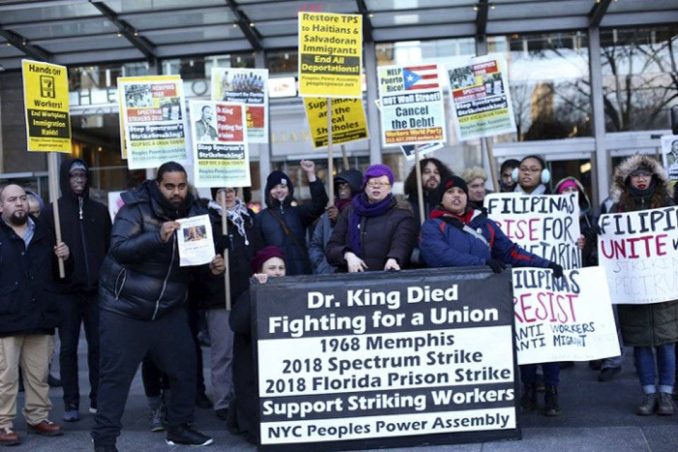 Held to honor the Rev. Dr. Martin Luther King Jr.’s legacy in the labor movement, the picket line supported Spectrum workers — members of Local 3 of the International Electrical Workers, who have been on strike since March 28 of last year — as well as Florida prisoners whose Operation PUSH strike began today.

The demonstrators chanted against union busting outside Spectrum’s headquarters near Central Park. They then marched to join a Rally Against Racism called by the health care workers’ union, Service Employees 1199, in solidarity with workers from Haiti, El Salvador and the continent of Africa.

Spectrum, formerly Time Warner Cable, was renamed after being purchased by Charter Communications. The $149 billion cable monopoly has demanded the elimination of union pension and medical benefits. It has refused to negotiate in good faith, instead bringing in hundreds of strikebreakers.

Both rallies paid tribute to Dr. King, who was assassinated while supporting striking sanitation workers in Memphis 50 years ago in 1968.