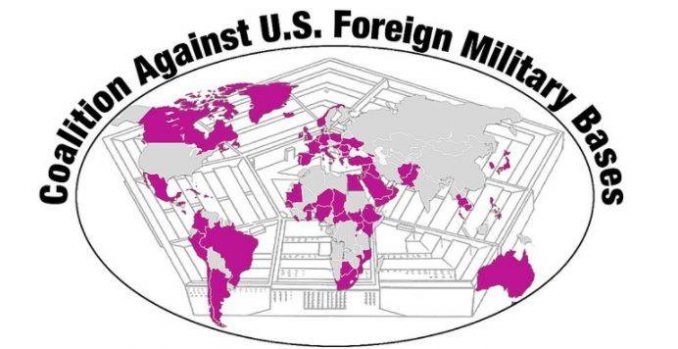 A conference held at the University of Baltimore on Jan. 12-14 initiated an international campaign to oppose all U.S. foreign military bases.

Activists from around the country and indeed the globe gathered to denounce the network of over 800 U.S. military bases in 80 countries that exert imperialist domination over the world.

The conference was at full capacity with 200 registered, over 10,000 views via live streaming on Facebook and YouTube, and an additional 1,500 views on UNACpeace.org. Other social media reports are still being gathered.

Many groups organized the conference, including the U.S. Peace Council, Black Alliance for Peace, the United National Antiwar Coalition, Code Pink, the International Action Center, World Beyond War, Alliance for Global Justice, Women’s International League for Peace and Freedom, Popular Resistance and Veterans For Peace. Participants attended from BAYAN USA, Okinawa Peace Appeal, the Task Force to Stop THAAD in Korea, Friends of the Congo, the Hands Off Syria Coalition and many other community and social justice organizations.

Research on the economic, political, environmental and military impact of U.S. occupation had been gathered from every corner of the world and was highlighted.

U.S. bases impact the environment and public health of millions of people as well as future generations. A majority of global superfund toxic sites that the Environmental Protection Agency identifies as posing risks to health or environment are on U.S. military bases abroad.

Regarding Latin America, the conference took up the issue of the 115-year occupation of Guantanamo Bay by the U.S. Navy and demanded its return to Cuba. The Cuban organization MOVPAZ (Cuban Movement for Peace and the Sovereignty of the Peoples) sent a special message of solidarity and support to the conference, highlighting the role of foreign military bases that restrict the sovereignty of oppressed nations.

Also condemned was U.S. intervention in Venezuela and other Latin American countries. There were calls for solidarity with Puerto Rico because of the genocidal treatment of the island, whose people continue to suffer after the destruction caused by Hurricane Maria.

Many struggles were also raised in the Asia-Pacific region. BAYAN USA spoke on the revolutionary struggle in the Philippines and drew the connection between the rebellion going on there and the U.S. military support for the Manila government. From Okinawa, Japanese activists are fighting to not only stop the construction of a new U.S. Marine Corps base on the island, but to remove the existing Futenma Air Station.

Activists from southern Korea who have been protesting the deployment of the U.S. military’s THAAD missile “defense” system shared their struggle. With all the lies and aggressive rhetoric in the U.S. media against People’s Korea, a voice from activists in southern Korea opposing the oppressive U.S. military presence there is very important for people here to learn about.

The failing U.S. strategy in the West Asia region was also highlighted. Despite 17 years of war, the U.S. has failed in its mission in Afghanistan. And despite seven years of proxy war and direct bombing campaigns in Syria, the Syrian government stands undefeated and grows more united with its neighbors. The danger of the continuing encirclement of Iran and increasing hostility by the Trump regime was also raised as a continuing issue with particular importance at this moment..

The expansion of AFRICOM and the U.S. secret and semi-secret military deployments in Africa were discussed. It’s been admitted that these bases were established in order to better secure the extraction of resources under the control of the Imperialists.

The conference passed several resolutions for action moving forward. One called for making Feb. 23 a global day of action against the Guantanamo Naval Base. This date falls on the 115th anniversary of the seizure of the territory from Cuba by the United States.

Another resolution called for a national day of anti-war action this spring. This day would raise such issues as ending U.S. wars abroad, closing all foreign U.S. military bases, redirecting the massive military budget to human needs and environmental protection, and disarming the entire U.S. arsenal of nuclear weapons.

Workers World supports the work of the Conference on U.S. Foreign Military Bases. We call for closing all U.S. military bases around the world, as they are nothing more than a loaded gun aimed directly at the people of the world who are struggling for self-determination and socialism. It is our job as working-class people living in the belly of the imperialist beast to unite with the working class around the world and do our part to end the war machine.

For more information and updates, go to www.noforeignbases.org.