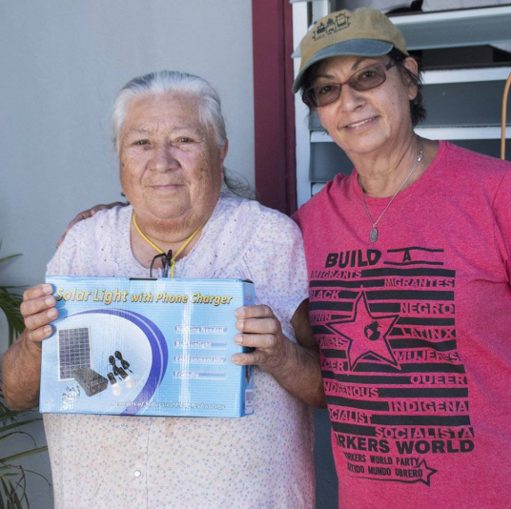 The following talk was given by Berta Joubert-Ceci, editor of Mundo Obrero/Workers World and a member of the Americas Steering Committee of the Women’s International Democratic Federation, at the national Conference on U.S. Foreign Military Bases, held from Jan. 12 to Jan. 14 in Baltimore. The Workers World article on the conference is at tinyurl.com/ycnhpv4n, the No Bases Coalition at tinyurl.com/yczzpcvj.

First of all, I would like to thank the organizers of this event because in these dangerous times gatherings like this are a crucial step for mobilizing peoples throughout the world. It is so urgent now to launch a struggle on a global scale.

On behalf of the Boricua people, I also want to thank you for including Puerto Rico on the agenda.

What are the points we want to get across?

Although the U.S. has a military presence in Puerto Rico, I would like to address the most urgent problems there right now.  Those are the developments around the debt crisis, particularly after Hurricane María.

But let’s have some brief background before the hurricane.  (In Puerto Rico, time is referred to as before and after Hurricane María, which hit on Sept. 20, 2017.)

There was already an unpayable, illegitimate public debt of $74 billion. This was the result of municipal bonds sold by the Puerto Rican government to finance governmental operations — not to develop the island’s economy; it also borrowed to pay interest.

In 2016, under the Obama administration, the U.S. Congress passed the Puerto Rico Oversight, Management and Economic Stability Act — Promesa — which created the Financial Oversight and Management Board for Puerto Rico. Better known as the Fiscal Control Board, it consists of seven members appointed by the U.S. president and one ex-officio member designated by the governor of Puerto Rico.

Many U.S. and international banks were involved in creating this debt. Santander Bank, in particular, shows perfectly the role of the banks in producing and increasing the debt.

Two of the FCB members were not only executives of Santander Bank, but they had been presidents of Puerto Rico’s Government Development Bank — the entity that used to manage the government’s budget. These two men, Carlos M. García and José Ramón González, “built Santander Securities, the bank’s municipal bond business, which established itself as a leading bond underwriter coinciding with the growth in Puerto Rican public debt.

We have to remember that the economy has been based on manufacturing for U.S. companies.  Even though they paid the workers relatively well, the profits did not stay in Puerto Rico, did not help build infrastructure and did not help to develop the island’s economy.

The taxes paid to the Puerto Rican government — by those who paid — were a mere 4 percent. Puerto Rico had been a tax-free haven for U.S. industries since its very beginning — first with sugar cane in agriculture, then with petrochemical processing, and after that, with pharmaceuticals, medical equipment and electronics.

The FCB proposed austerity plans that included cuts in health care, the public university and 10 percent of public workers’ pensions; reduction of the workday; termination of Christmas bonuses; elimination of funding for the 78 municipalities; school closings; increased taxes; and privatization of the state energy industry and finance-healthy agencies like the State Insurance Fund Corporation.

So while the majority of the Puerto Rican people were thrown into poverty, obscene amounts in the millions of dollars were being paid to the same FCB for consultants, subcontractors and others. Just as an example — because there are many at every level of the government, not only pertaining to the FCB — they contracted Natalie Jaresko, the board’s executive director, for $625,000 a year!

The destruction caused is only comparable to that caused by the San Ciriaco Hurricane in 1899, devastation that the U.S. used to change Puerto Rico’s economy by imposing the dollar and substituting the U.S. sugar industry for Puerto Rico’s exports of coffee and tobacco to Europe.

Similarly, the collapse of the electrical system gave the U.S. the perfect excuse to accelerate their plans for privatization of this essential industry. The fact that electricity has not been re-established for almost half of the population more than 100 days since the hurricane is not accidental. The government hopes that people will get so desperate that they will accept  privatization of the utility — with its higher costs.

The electricity sector alone has uncovered the deep corruption of the local government in conjunction with the federal government. One example is the contract made with the small, Montana-based Whitefish Company for $300 million to rebuild the electric power — a company with only two employees!

FEMA and Army Corps are criminal

Now, the U.S. Army Corps of Engineers is in charge of the restoration of electricity, but they are well-known for their slowness.

Both the Federal Emergency Management Agency’s and the Army Corps’ actions in Puerto Rico have been criminal. After the hurricane, FEMA immediately took control of all the containers that arrived on the island with material aid and supplies — and would not distribute the goods. Both agencies’ slowness in assessing damages and ordering materials — from blue roof tarps to electrical poles — amount to genocidal acts against the Puerto Rican people.

Four months after the storm, there are still destroyed houses in the rural areas and mountains with no blue tarps or electricity. The Army Corps has not even rebuilt one single bridge in Puerto Rico.

The conditions post-María have caused a humanitarian crisis.  At least a quarter of a million Boricuas have migrated to the U.S. in desperation. More than 1,000 people have died and thousands are still homeless.  There is hunger. Communication and drinking water are still compromised. The country is paralyzed — particularly because of the lack of electricity. Thousands of small businesses have closed.

What we are witnessing in Puerto Rico is not only the devastation by two hurricanes and the “failure” of reconstruction by both local and federal governments. It is the exposure of the catastrophe of colonial status that has finally reached a dead end.

With no sovereignty, Puerto Rico cannot solve this crisis; it cannot develop the economy to benefit its people. This has become very clear.

However, there is an important and very positive development in Puerto Rico. Thousands of community-based groupings have been forming all around the island.

Initially, neighbors who didn’t even know each other started uniting to clear paths since there was absolutely no help from the outside — either from the local or federal governments. They started helping each other, gathering food and cooking for the community and planning actions. Now, many communities are organizing protests to demand electricity from the government.

Many organizations that existed before are expanding to new areas beyond their barrios. They are looking for the establishment of agroecological cooperatives, for a sustainable economy, for solar energy and more.

The fight for schools

Teachers, parents, students and their communities have been holding constant demonstrations and actions to demand that their neighborhood schools be opened.  Secretary of Education Julia Keleher, who is from the U.S., was hired by the current government of Ricky Roselló, who is pro-statehood, for the purpose of privatizing public education.  She closed schools before the hurricane, and then prevented the opening of schools after María. Many families have migrated to the U.S. for this reason alone — so that their children could begin school.

The UTIER, the union of electrical workers of Puerto Rico, worked as real heroes in the mountains to restore electricity.  The union has filed a suit against the Promesa law, based on its lack of constitutionality. The federal judge under the Promesa law heard the case a couple of days ago and the case is still pending.

The pro-independence movement is beginning to actively look for ways to unite in order to start the process of decolonization.

So while both the U.S. government and Puerto Rico’s subservient puppet are trying to take advantage of the post-María catastrophe to impose and deepen austerity measures against the people of Puerto Rico, there is a tide of mobilization from below that is beginning to challenge this dictatorial maneuver.

How we can help

What can we do here? How can we help the people of Puerto Rico?

Much has been said about the suffering and the need for aid and supplies to alleviate the horrendous conditions. But very little is said about the responsibility of the U.S. government towards the Boricua people.  The people would not be in this difficulty were it not for the straight jacket that is U.S. colonial rule.

The Boricua people do not need charity. What they need is justice and solidarity. They need reparations from the United States for more than a century of colonization.

The people in the United States must expose the crimes the U.S. daily commits everywhere in the world.

Regarding Puerto Rico, people in the U.S. must demand:

U.S. out of Puerto Rico!

End the Promesa law and its Fiscal Control Board!

End the blockade of Puerto Rico!