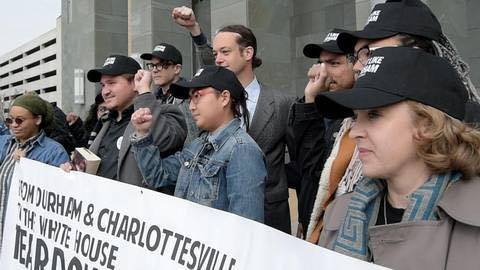 Some of the eleven stalwart anti-racist Durham activists after their court hearing, Dec. 5.

Nationwide, activists are gearing up to show their solidarity with the anti-racist fighters who pulled down a Confederate statue in Durham, N.C., on Aug. 14. With a new court date set for Jan. 11, organizers are arranging transportation to arrive in Durham in the days before. In addition, plans are being made for national solidarity actions between Jan. 11 and Jan. 15.

The state has continued its political maneuvering in relation to the actions on Aug. 14, as well as in response to activists arrested during an anti-Klan protest in Durham on Aug. 18. A judge has continued the case, with a court date each month since Aug. 14, in an attempt to dampen the momentous solidarity from around the country.

The anti-racist activists have asserted that, at the trial, they will insist that tearing down monuments to white supremacy is not a crime. Organizers in Durham have initiated a campaign for local community members to sign up to be witnesses for the defense during the trial, allowing them to testify on the impact of monuments to white supremacy and the legacies of racism in the area. Plans are also in the works for a People’s Tribunal in the days before the trial.

Finally, solidarity actions are being convened from Jan. 11, the court date in Durham, to Jan. 15, the national Martin Luther King Jr. holiday, with the theme “In the spirit of Dr. King — workers’ rights, not white supremacy! Drop the charges against Durham activists!” The call will ask organizations and communities around the country to hold solidarity actions at racist monuments or other suitable targets.

For more information and to get involved, visit facebook.com/DurhamWWP or doitlikedurham.org.