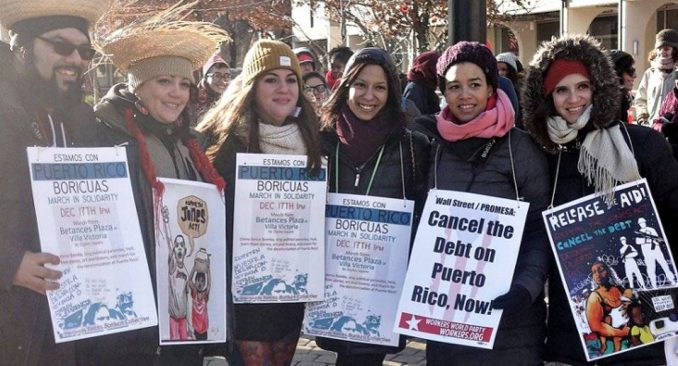 Protesters were outraged at the U.S. government’s deadly neglect of hurricane-ravaged Puerto Rico and Wall Street’s unnatural disaster of bankruptcy administration. They gathered in Plaza Ramón Emeterio Betances, named for the inspirer of Puerto Rico’s “Grito de Lares” armed uprising for independence in 1868.

Ernesto Eroc Arroyo welcomed the hundreds gathered in the heart of Boston’s Puerto Rican community, Villa Victoria. “Where I grew up, over there on the third floor,” recalled Arroyo, “was born the Puerto Rican struggle to block bulldozers and stop racist ‘urban renewal.’ Villa Victoria was a victory for decolonization.”

Jasmine Gómez described Raíces Borikén Collective as “artists, activists and organizers, the majority of us women and queer, who work through education, culture and direct action to dismantle the imperialist, white-supremacist, capitalist, patriarchal system that has kept Puerto Rico under U.S. colonial subjugation for 120 years.”

Another poster blasted the U.S. Trump Congress, in which Puerto Rico has no vote, for its new, “reformed,” 20 percent tax on goods made in Puerto Rico — a de facto blockade of the island’s economy.

The march blocked Massachusetts Avenue at the offices of Seth Klarman’s Baupost Group, a hedge fund that “owns” nearly $1 billion of Puerto Rican bond “debt.” The action further highlighted Boston’s role as an administrative and financial center of colonial rule.

Boston boasts of its 18th-century “anti-colonialism” against Britain, while the city operates as a financial and legal center for the U.S. colonial project in Puerto Rico. It is home to Puerto Rico’s federal district court as well as the Boston Group, which has funded massive school closures and privatization in Puerto Rico, and the Blackstone Group of financiers, who are rapidly turning the people’s beaches into playgrounds and casinos for wealthy elites.

Outside the Baupost Group offices, Gillian Mason of MA Jobs with Justice spoke on behalf of 160 labor organizations in that coalition. Mason blasted “the economic system and the vultures who orchestrated the crisis in Puerto Rico.”

“We are sick of these capitalists like Seth Klarman of Baupost making money off the backs of working people in Puerto Rico and here in Massachusetts,” Mason continued. “It is time to decolonize Puerto Rico now, with the first step being to cancel the debt to capitalists!”

Steelworkers Local 8751 — the Boston School Bus Drivers — provided a mobile sound truck and handed out a statement in solidarity with Educamos, a Puerto Rican teachers’ union, saying: “While thousands of families have been forced out of Puerto Rico in recent months — many of whose children are now riding our school buses in Boston — we will continue to fight with you in the hopes that our combined efforts will soon end this criminal plot of forced migration of your people from your land and your nation.”

Every speaker denounced and called for an immediate end to the U.S.-imposed Puerto Rico Oversight Management and Economic Stability Act (Promesa), which, even before the hurricane, had forced Puerto Rico to slash pensions and the minimum wage, close hundreds of schools and health facilities, lay off thousands of service workers, privatize social services like water, electricity and education, and liquidate people’s meager savings, much in scam “funds” pushed by UBS, Fidelity and other global financial institutions, while demanding extortionate, high-interest payments to Wall Street that can never be met.

Steve Gillis is the financial secretary of Steelworkers Local 8751.