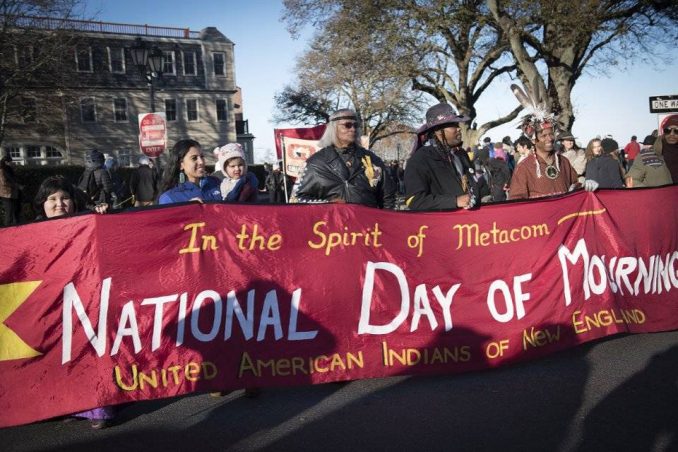 Mahtowin Munro delivered this talk at the National Day of Mourning, Nov. 23, in Plymouth, Mass.

Welcome to our beautiful Indigenous People who have come to National Day of Mourning today! Welcome to those who have traveled a long distance — from Labrador, from Delaware and Virginia, from Maine and Mexico and more. Thank you to the International Action Center in New York and Boston and to our friend Dahoud Andre for organizing buses. Welcome to the youth and students from many schools, and thank you to the parents who have brought babies and toddlers, too.

We send out love to everyone here today, and especially to our Black family (cuz Black Lives Always Matter), to the elders, to immigrants and refugees threatened by U.S. immigration policies, to our Muslim family, disabled family, LGBTQ2Spirit family and not least our union family.

Workers from [UNITE HERE] Local 26 Harvard Dining Services are volunteering in the kitchen right now, and we have members of [United Steelworkers] Local 8751, Boston School Bus Drivers helping out with logistics. We want to give a big shout-out to the volunteer [American Sign Language] interpreters who make our program accessible to deaf people.

Sometimes, I have been asked by non-Native people why a lot of Indigenous People seem to know so much about history and are often such good speakers.

I can tell you why: We remember and we speak because we will die otherwise. Our histories and cultures would disappear if we did not do this.

Yet when we come forward to do this work, sometimes legislators act as though we dropped in from outer space. They did not think there were any Native people in their town or in their area. Don’t we all live on reservations? They make casino jokes. Even when we explain in grim detail the barbaric acts of Columbus and his men, we hear legislators say that Columbus should be celebrated because he brought civilization to us. We hear supposedly educated people contend that millions of Indigenous humans somehow accidentally died due to disease — as though invaders, from Columbus on, did not deliberately murder, hunt, starve and dispossess us.

Is “sinking Columbus” symbolic? Yes, Columbus is a hated symbol of white supremacy, the same way that Confederate flags and statues of Stonewall Jackson are. All of these symbols of white supremacy need to come down.

The erasure that we encounter in so many aspects of our lives, as though we do not exist or are invisible, this non-Native choice to remain ignorant of present-day Native peoples and of our histories, this is part of the settler-colonial violence and dispossession we have endured for centuries. White supremacy, gender violence are all part of this. Settler colonialism came over in many boats, one of them being the Mayflower, and the violence from that has never ended.

In modern times, this violence has led to thousands of murdered and missing Indigenous women and girls. This colonial violence means many thousands of Indigenous People lack safe drinking water or a decent diet when our food sovereignty is threatened. I think especially of the pipelines and the corporate salmon farming destroying the salmon that Indigenous peoples have relied upon for millenia.

This violence tears apart our families generation after generation — years ago from residential schools and currently due to disproportionate numbers of our children in foster care.

We suffer the highest rates of police violence — yes, even higher than what Black people experience. Right now, people are seeking Justice for Jason Pero, a 14-year-old Anishinaabe child killed recently by police in Wisconsin. Paul Castaway, Loreal Tsingine, so many more have died this way.

Settler destruction of the land and water is well-known and is violence upon our Indigenous bodies as well. The Trump administration attacks Bears Ears and other sacred protected sites. They manipulate regulations to open up reservation lands to more mining and other devastation at sacred Apache Oak Flat in the sacred Black Hills. Sacred Mauna Kea in Hawaii is threatened by efforts to build the world’s largest telescope there.

We hope that everyone will join in demanding: No KXL! No DAPL! No Enbridge, no pipelines, no mining, no fracking, no dams! Drop the charges against all our water protectors!

What we face here in November 2017 could not be more serious. We all have immediate choices to make if we are to work together to save the earth. We need non-Native people to listen to us and stop shunting us to the side like quaint remnants of the colonial past. We have been trying to tell you how to save the planet, and it is not going to happen with carbon credits and other double-talk nonsense that comes out of U.N. global summits.

When hurricanes or earthquakes strike, it is not only the effects of climate change that are the problem, as we see in Puerto Rico and the Caribbean right now. Yes, the hurricanes caused immense damage. But that damage has been magnified a hundredfold due to colonialism and the centuries-long extraction of resources and debt forced upon these islands. The U.S. response — the criminal and genocidal response in Puerto Rico in particular — demonstrates the need for massive systemic changes to deal with the impacts of climate change.

When I look at the earthquake devastation in Mexico or the suffering in Puerto Rico, I say that we cry from each other’s eyes, the bonds of solidarity are so strong.

For centuries, we have lived under settler colonialism and allowed ourselves to be divided and brainwashed by it. We need to decolonize. Every aspect of what we do and think needs to be decolonized — especially treating the earth like a commodity, consuming resources and seeking profit instead of balance.

The way we think, what we think we know, the names of the cities and towns — all of this is colonized. This should be Patuxet we are in right now, not Plymouth named for some faraway English town. We need to decolonize culture, we need to decolonize education and how we treat our children. We need legal systems that reflect Indigenous law and understandings. The settler courts occasionally make a decision in our favor, but too often they uphold settler values, as when they say the Ramapough in New Jersey do not have a right to erect temporary structures such as teepees on their own land. Or when the courts say the Penobscot Nation does not have inherent rights to make decisions about the Penobscot River. As Indigenous humans, whether in Bolivia, Nova Scotia or Massachusetts, we need to be able to make the decisions about all the lands and waterways where our ancestors have always been. That is decolonization, too.

When we come together at times like this year’s National Day of Mourning,  here above the Plymouth rock shrine to settler colonialism, we get a glimpse of what all our lives could be like if we decolonize.

No matter what the U.S. and other governments have done, our fundamental relationship as Indigenous Peoples with the land, through bones and blood and culture and ceremony, is not reduced.

Today you will learn about many aspects of Indigenous struggles. Don’t just listen. Act. When you leave here, think about what you really know and what you don’t know.

Think about what is dividing us. And then work to support Indigenous resistance and decolonize every little thing.