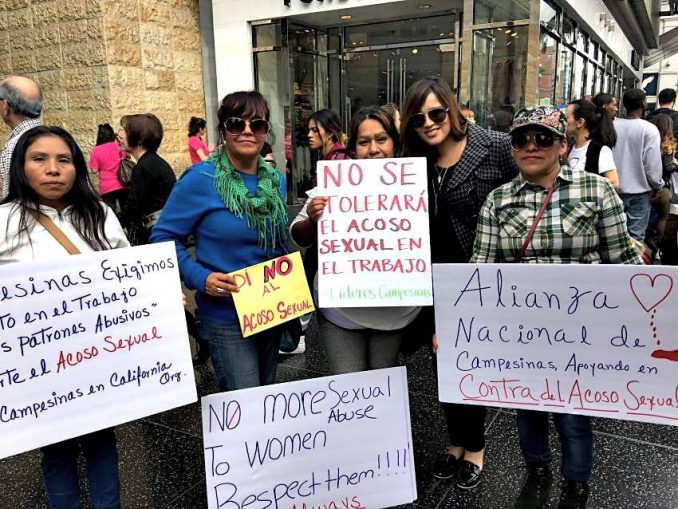 National Alliance of Women Farmworkers at the ‘Me Too Survivors March’ in Hollywood, Nov. 12.

Organizers of Alianza Nacional de Campesinas spoke movingly to a crowd of thousands of participants at the #Me Too Survivors March on Nov. 12 in Los Angeles.  At the rally, they read a letter of solidarity from 700,000 women farm workers to the courageous women who have spoken out publicly about their experiences of sexual harassment and abuse in Hollywood.  The national alliance is comprised of current and former women agricultural workers and their relatives.

Their statement reads, in part, “We write on behalf of the 700,000 women who work in the agricultural and packing sheds across the United States.  [W]e have watched and listened with sadness as we have learned of the actors, models and other individuals who have come forward to speak about the gender-based violence they have experienced at the hands of bosses, co-workers and other powerful people in the entertainment industry. Sadly, we are not surprised because it’s a reality we know far too well. Countless farm worker women across our country suffer in silence because of the widespread sexual harassment and assault that they face at work.”

It continues, “We do not work under bright stage lights or on the big screen.  We work in the shadow of society in isolated fields and packing houses that are out of sight and out of mind. Our job nourishes the nation with crops that we plant, pick and pack.  Even though we work in different environments, we share a common experience of being preyed upon by individuals who have the power to hire, fire, blacklist and threaten our economic, physical and emotional security.”

Standing up publicly to denounce sexual assaults in agribusiness shows great courage, as the farm workers reveal: “Complaining about anything, even sexual harassment, is unthinkable because too much is at risk, including the ability to feed our families.”

In conclusion, the women stress, “We understand the hurt, confusion, isolation and betrayal that you might feel,” and the shame and fear.  “We know that it is not our fault.  The only people at fault are the individuals who abuse their power to harass, threaten and harm us, as they have harmed you. … As you cope with scrutiny and criticism because you bravely chose to speak out against the harrowing acts that were committed against you, please know that you are not alone. We believe and stand with you.”

Hundreds of thousands of women, mostly Latinx immigrants, many undocumented, work in U.S. agricultural fields. Sexual violence is so rampant that a woman farm worker in Iowa remarked, “We thought it was normal in the United States that in order to keep your job, you had to have sex.” (New York Times, Jan. 19, 2016)

Government regulations prohibit legal aid groups from representing undocumented people. Moreover, Washington’s war on the undocumented creates a climate of fear of detention or deportation for women immigrants who report incidents of abuse.

This urgent situation must be taken up by unions and by women’s and other progressive organizations.

This open letter was originally published in Time magazine on Nov. 10.