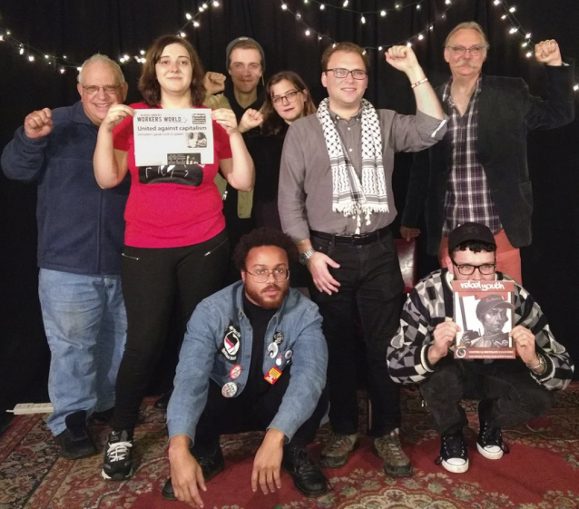 Mond Jones, a youth leader of the Detroit branch of Workers World Party, spoke and was well received at a commemoration of the 100th anniversary of the Bolshevik Revolution organized by the chapter of the Young Communist League in London, Ontario, Canada on Nov. 4.

Jones’ presentation emphasized the importance of the Leninist position on the right of oppressed nations to self-determination in sparking subsequent revolutions in Latin America, Asia and Africa. He discussed how the lessons of the USSR experience speak to the need for continuing the revolutionary process in the transition from socialism to communism and called for going to the masses to build the working-class struggle for socialism as the best way to commemorate the Bolshevik Revolution.

Jones emphasized WWP’s solidarity with all those fighting U.S. imperialism, from the Democratic People’s Republic of Korea to Venezuela, Cuba, Syria and Iran, and called for an end to the colonial status of Puerto Rico and for canceling the debt. Other speakers included Adrien Welsh, general secretary of the Young Communist League of Canada, based in Montreal, Quebec; and Dave McKee, Ontario provincial leader of the Communist Party of Canada. The meeting was chaired by Clara Sorrenti, organizer of the YCL in London. There was also a dynamic spoken word performance by Mohammad Ali, an artist and activist from Toronto.