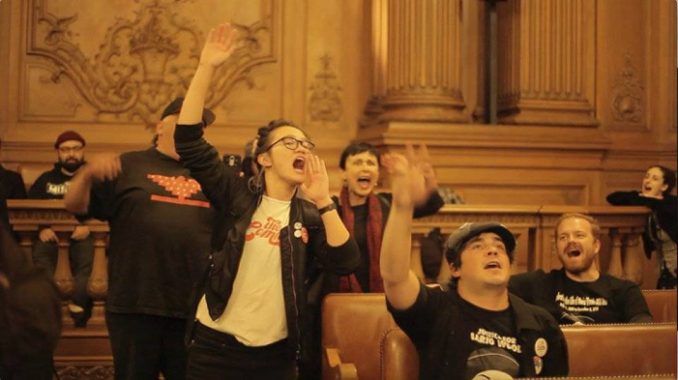 Protest at hearing on cops use of tasers in SF Bay Area.

By Jeremy Miller and Terri Kay

After 13 years of community success in keeping Tasers from the SFPD weapons’ arsenal, the commission agreed 4 to 3 to allow them. The vote took place under questionable circumstances given the Brown Public Meetings Act. This state law guarantees the public’s right to attend and participate in meetings of local legislative bodies.

The hearing room was packed with community anti-Taser activists, with more people watching on closed-circuit TV in an overflow room. Community members patiently sat through long-winded testimonies from official “experts” on Tasers, including a representative from Axon, a Taser producer that stands to profit immensely from this deal.

When the hearing was finally opened to public comment, about 50 people lined up along the side and back of the room to speak. After only a few speakers, Cristina Gutierrez — fondly known in the community as Momma Cristina, from her role as one of the Frisco 5 Hunger Strikers — took her turn to speak. The commission had limited each speaker to two minutes, but Gutierrez wasn’t finished after two minutes and kept talking. Authorities turned off her mic, but that didn’t stop her and the audience yelled to let her continue to speak.

Instead, Commissioner Julius Turman, who ultimately voted against Tasers, called the meeting into recess. All the commissioners walked out, and a line of police and sheriff’s deputies formed across the space separating the audience from the vacant commissioners’ area. The people waiting in line decided to continue with their talks, sharing with the audience all the reasons they didn’t want the SFPD to be armed with Tasers.

Turman reconvened the meeting in another location while community members, uninformed of the change, waited in the original room. Only five people at a time were allowed in the new room and only those “not involved in disruptive behavior.” (sfchronicle.com, Nov. 4)

Here’s where the Brown Act violation may apply. The vote was taken without the public being fully allowed to be present during the discussion leading up to the vote and for the vote itself.

Anti-Taser activists, who were locked out of the hearing, remained in the hallway chanting and singing. At one point, in an unprecedented act, acknowledging the illegitimate nature of the proceeding, San Francisco Police Commissioner Petra DeJesus actually left the commission to stand with the people.

When the vote was announced the crowd outside chanted, “Shame, shame!”

Why all the anger about Tasers? Aren’t they a “less-lethal” weapon? Even Taser proponents don’t call them non-lethal. One big issue is that even a “well-trained” officer can’t predict whether a Taser will kill someone. Cops don’t know whether the person has a heart condition, pacemaker, asthma or any other condition that could automatically turn use of a Taser into deadly force. Reuters documented 1,005 incidents in the U.S. in which people died after police stunned them with Tasers. Ninety percent of these victims were unarmed. (reuters.com, Aug. 23)

Tasers are more likely to be used on African Americans and other people of color, especially against those in the midst of a mental health crisis. A Baltimore Sun study of Taser use between 2012-14 showed that out of 3,000 Taser deployments, 64 percent of the victims were Black men.