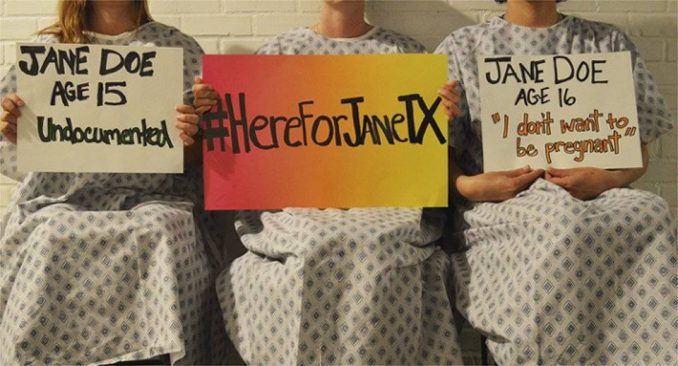 The state of Texas is holding hostage a 17-year-old unaccompanied immigrant minor who wants an abortion.

Held in a federally funded shelter in legal custody of the Office of Refugee Resettlement, she obtained a judicial bypass to have an abortion with the help of the pro-choice group, Jane’s Due Process. A bypass is allowed when it’s impossible to obtain the parental consent required in Texas. However, the director of ORR ordered the shelter not to take Jane Doe (so designated to protect her identity) to a clinic appointment or to allow her court-appointed guardian to do so.

Instead she was taken to a right-wing “crisis pregnancy center” where she was forced to undergo anti-abortion counseling. CPCs do not provide health care, nor are they regulated; they are infamous for promoting medically incorrect and biased information to dissuade women from having abortions.

The American Civil Liberties Union filed suit Oct. 5 for a temporary restraining order to immediately allow Jane to be transported to a clinic. Texas Attorney General Ken Paxton countered with a friend-of-the-court brief supporting ORR, arguing that immigrants do not have constitutional rights.

The relief sought by ACLU includes stopping ORR officials from pressuring Jane to talk to her mother about wanting an abortion. She is refusing to do so because her parents beat her pregnant sister so badly that she miscarried. Fear of physical abuse is why she fled to the U.S.

Reproductive justice groups and advocates issued calls for ending the Hyde Amendment, which forbids abortion coverage to millions of low-income Medicaid recipients, on Sept. 28, the 41st anniversary of Hyde’s passage. Prominent on the All* Above All website is a 1980 quote from Supreme Court Justice Thurgood Marshall: “The Hyde Amendment is designed to deprive poor and minority women of the constitutional right to choose abortion.”

Marshall’s words were statistically validated by a report in the Feb. 17 issue of Social Work in Health Care, titled “The Undue Burden of Paying for Abortion: An Exploration of Abortion Fund Cases.” This is the first study of women who need private financial aid to help pay for abortions — predominantly low-wage working women of color, youth, immigrants, rural residents, transpeople, women with disabilities and women subjected to domestic abuse. The study concludes that public funding restrictions, including economic, geographic and legal barriers to abortion, are “state and federally sanctioned classism and racism.” (Rewire, Feb. 27)

Dr. Gretchen E. Ely and co-authors at the University of Buffalo School of Social Work looked at 3,999 women requesting help for abortion care from the George Tiller Memorial Fund from 2010 to 2015. The fund, run by the 70-member groups in the National Network of Abortion Funds, honors Dr. George Tiller, the Kansas provider murdered in 2009 by an ­anti-abortion fanatic. The Tiller Fund gives priority to women seeking second trimester procedures, which account for 1.5 percent of abortions and are more costly than those in the first trimester.

About a third of NNAF fund ­recipients relied on public assistance like food stamps. The majority had children: 41 percent had one; 17.5 percent had three or more. The average distance recipients had to travel to clinics doubled from 97 miles in 2010 to nearly 200 miles in 2015 — reflecting 288 restrictions passed in those years. Most lived in states with many restrictions and few clinics, nearly half in the South and 27 percent in the Midwest. All were able to scrape ­together an average of $500, but that was much less than the $2,000 ­average for second trimester procedures.

Ely told Rewire that donations to the Tiller Fund “are actually picking up a chunk of public health costs [and] helping women access a procedure that should be part of the mainstream health system.” The study calls for “abortions to be fully covered by all health insurance, both public and private.”

Congress could care less about the hardships that abortion restrictions impose on the majority of working and oppressed women in the U.S.

By a vote of 237 to 189 along party lines, members of the House of Representatives approved a bill Oct. 5 to ban abortions 20 weeks after gestation. The supposed rationale is that anti-abortion zealots believe a fetus begins to feel pain at 20 weeks. However, all major medical groups in the U.S. and England assert a fetus cannot feel pain until the third trimester at 28 weeks. Legal experts contend this ban is unconstitutional because it violates a key provision of Roe v. Wade, which provides for a right to abortion until fetal viability, medically determined at about 24 weeks.

If enacted, which is doubtful because passage in the Senate requires 60 votes, the bill would impose enormous burdens on women whose test results late in the second trimester show fetal abnormalities, as well as on those who postpone the procedure due to fear stemming from rape, incest or domestic violence or those trying to scrape together funding.

Meanwhile, one of the House co-sponsors of the ban, Tim Murphy, was forced to resign Oct. 11 after reports that he had urged an extramarital lover to have an abortion in January. The text exchange occurred on Jan. 25, the day after Murphy had co-sponsored the Life at Conception Act. Caught-in-the-act of hypocrisy!

The House exposed the overall hypocrisy of the Republican majority’s so-called pro-family stance when it didn’t renew funding on Sept. 30 for the Children’s Health Insurance Program, which subsidizes health care for 9 million youngsters. That means children in some states will soon be unable to get routine checkups, immunizations, sick visits and other services. Talk about a cynical move by legislators who appear to care more about defending lives of the “pre-born” than about caring for needy existing children!

But the fight to expand access to abortion care recently advanced on two fronts.

The ACLU filed a federal lawsuit Oct. 3 challenging Food and Drug Act restrictions on where a woman may receive the medical abortion pill Mifeprex, which is a tested, safe and effective method of ending pregnancy up to 10 weeks. Currently, patients may not fill a prescription at a retail pharmacy, but must be handed one at a clinic, medical office or hospital from providers who pre-register with the drug maker and order and stock such medications at their facility.

The suit argues that FDA’s restrictions are medically unnecessary and that many qualified clinicians are unable to satisfy them, forcing patients to seek medical abortions elsewhere or resort to surgery. Such restrictions do not exist in other countries, are not medically mandated and are not supported by leading U.S. medical organizations. The suit asserts these “politically motivated regulations place needless burdens on women seeking this option.” That claim rests on a 2016 Supreme Court decision that regulations cannot impose an undue burden on abortion access without valid medical justification.

In another advance, two states — Oregon and Illinois — have passed legislation promoting access to abortion. Gov. Kate Brown signed an act Aug. 15 to ensure that Oregonians, regardless of income, citizenship status, gender identity or type of insurance, have access to the full range of preventive reproductive services including family planning, abortion and postpartum care.

Illinois Gov. Bruce Rauner signed legislation Sept. 28 allowing state health insurance and Medicaid coverage for abortions. More than two dozen states provide Medicaid coverage for abortions only in cases of rape, incest or if the pregnant woman’s life is in danger, in line with Hyde Amendment exceptions to its ban. Seventeen states now use state-only funds for women seeking abortions for other reasons, 13 because of state court orders.

There is no stopping the fight for reproductive justice. It can only accelerate, led by women of color opposing blatant racism and austerity measures by state and federal governments. Women’s human rights and women’s liberation will win!