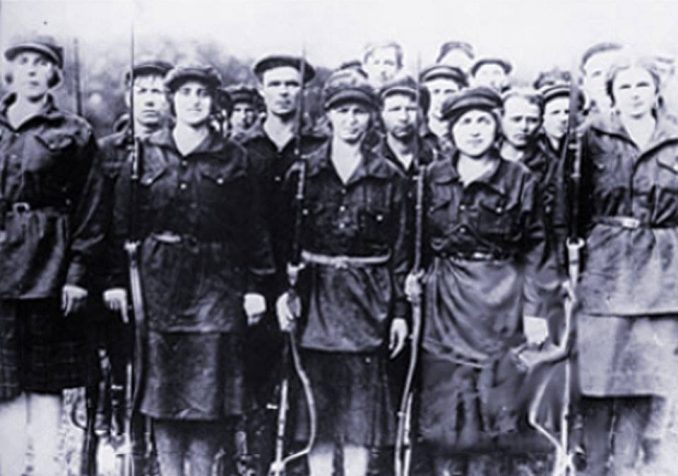 In 1918, women joined the ‘Red Sisters’ militias to defend the new
Soviet republic.

As we described in the first article in this series, the workers’ revolution that started in Russia in 1917 and spread to all the nationalities brutally oppressed by the czarist empire took place in one of the most underdeveloped countries of Europe, only recently emerged from feudalism. The majority of the people were impoverished peasants, and few could even read or write.

Nevertheless, it was a revolution that reflected the rise on a world scale of a working class capable of taking power into its own hands in order to socialize the means of production — to use them not for private profit but to liberate the people from want and oppression.

From its very beginnings, the revolutionary government initiated social advances far beyond anything achieved in the capitalist West.

Take the question of the status of women.

Just six weeks after the revolution, on Dec. 19, 1917, the church’s control over marriage, rooted in the patriarchy, was replaced by civil marriage. Divorce was made very simple. If there was mutual consent by both spouses, a divorce was immediately granted. If just one spouse requested a divorce, there was a brief court hearing. No grounds were needed, no contest, no evidence or witnesses. Soviet Russia became the only country in the world with full freedom of divorce.

Within a year of the revolution, a marriage code was produced that asserted the complete equality of rights between spouses as well as between legitimate and “illegitimate” children.

When two people marry, which must change their last name? The Code of Oct. 17, 1918, stated: “Married persons use a common surname. … On the registration of marriage they may choose whether they will adopt the husband’s (bridegroom’s) or wife’s (bride’s) surname or their joint surnames.”

Lenin in 1919 famously summed up what the Bolsheviks had achieved and what still had to be done:

“We actually razed to the ground the infamous laws placing women in a position of inequality, restricting divorce and surrounding it with disgusting formalities, denying recognition to children born out of wedlock, enforcing a search for their fathers, etc., laws numerous survivals of which, to the shame of the bourgeoisie and of capitalism, are to be found in all civilized countries. We have a thousand times the right to be proud of what we have done in this field.

“But the more thoroughly we clear the ground of the lumber of the old bourgeois laws and institutions, the more we realize that we have only cleared to build on, but we are not yet building.

“Notwithstanding all the laws emancipating women, she continues to be a domestic slave, because petty housework crushes, strangles, stultifies and degrades her, chains her to the kitchen and the nursery, and she wastes her ­labor on barbarously unproductive, petty, nerve-racking, stultifying and crushing drudgery. The real emancipation of women, real communism, will begin where and when an all-out struggle begins (led by the proletariat wielding the state power) against this petty house-keeping, or rather when its wholesale transformation into a large-scale ­socialist economy begins.”

What the revolutionaries envisioned was a proliferation of communal laundries, kitchens, nurseries, kindergartens and so on that would free women from household drudgery.

Now, a century later, all kinds of labor-saving devices exist in developed countries to lighten the burden of housework that was so onerous in Lenin’s time. Nevertheless, women still have the major responsibility for this work — even when they have also become wage earners on a level close to that of men. In the United States, women make up 47 percent of the total workforce, yet most women workers with families are the primary caregivers in raising children and doing the housework.

In November 1920, Soviet Russia became the first country in the world to legalize abortion. Abortions were already being performed, of course, but in secret, often in unsanitary conditions and at a steep price. To protect the health of women, the decree stipulated that the operations “be performed freely and without any charge in Soviet hospitals, where conditions are assured of minimizing the harm of the operation.”

Despite great medical advances, we in the U.S. are still fighting for the right to control when and if we have children. Capitalist politicians — most of them men — are constantly finding ways to restrict our access to contraception and abortion.

It took many years to build up the Soviet economy to a level where these services were available to all women. But then they suffered a terrible setback after Nazi Germany, on June 22, 1941, invaded the Soviet Union with 4.5 million soldiers along an 1,800-mile front in Operation Barbarossa.

Yet despite the massive destruction and death at the hands of fascist-led German imperialism in World War II, followed by the staggering costs imposed by the Cold War, the social position of women in the USSR continued to outstrip that in the capitalist countries.

Dorothy Ballan, one of the founders of Workers World Party, wrote the book “Feminism and Marxism” in 1971. She cited reports in the New York Times and other U.S. papers showing that 79 percent of the doctors in the USSR at that time were women.

Wrote Ballan, “More than 30 percent of the engineers are women, 52 percent are head doctors or heads of health agencies; 33 percent of collective farm management jobs are held by women. All professions are open to her; women make up 47 percent of the scientists. Half the population of the universities are women. There are also women bus drivers, subway conductors, and women are in virtually every field of work. There is equal pay for equal work. In case of pregnancy, a woman receives two months paid vacation before delivery and another two months after delivery. Working women may take advantage of widespread nurseries and kindergartens and daycare centers. Abortion is legal at any age and virtually free of charge.”

The young Soviet Russia, which had established the most progressive laws and practices in the world regarding liberation of women, also took a stand against the oppression of lesbian and gay people.

Bob McCubbin, in his book “The Roots of Lesbian and Gay Oppression” first published in 1976, wrote: “It took less than two months for the Bolshevik government in Russia to take action against lesbian and gay oppression. And it is important to note that they did so even though there was no gay movement in Russia as there was in Germany. In ­December of 1917 the czarist anti-­homosexual law was removed from the ­Russian penal code.

“As paraphrased by Wilhelm Reich in ‘The Sexual Revolution,’ the Bolsheviks’ position was that the problem of homosexuality was exclusively a scientific one. They believed that homosexuality harmed no one and that it was wrong to punish people for their sexual orientation. The Bolsheviks also expressed the idea that it was necessary to take down the walls that separated gay people from the rest of society. Such a revolutionary proposal was entirely in keeping with their defiant rejection of bourgeois attitudes and practices in every area of social concern. …

“A pamphlet called ‘The ­Sexual Revolution in Russia’ by the director of the Russian Institute of Social Hygiene, first published in 1923, stated: ‘Concerning homo­sexuality, sodomy, and other forms of sexual gratification, which are set down in European legislation as offenses against public ­morality — Soviet legislation treats these as exactly the same as so-called “natural” intercourse. All forms of sexual intercourse are private matters. Only when there is use of force or duress, as in general when there is an injury or encroachment upon the rights of another person, is there a question of a criminal prosecution.’”

McCubbin’s book can be read online at workers.org/books.

Even as the Bolsheviks were making these great strides in defying bourgeois convention and eliminating the oppressive laws imposed under czarism, the material conditions for the people were devastating.

The first world war, in which so many had died, was followed by a civil war and an invasion by 14 imperialist countries, including the U.S., that tried to strangle the revolution in its infancy.

Over two years the imperialists poured some 200,000 soldiers into an attempt to destroy the revolution. But the newly organized Red Army, with support from many hastily organized local militias, was able to beat back the invaders and home-grown counter-revolutionaries.

Nevertheless, in 1920 the Soviet republics emerged from the civil war and imperialist intervention in a state of economic collapse unparalleled in history. Industrial production was about a fifth of the 1914 level and the population had shrunk. Between the end of 1918 and the end of 1920, war, epidemics, famine and cold killed 9 million people in Russia.

All this produced serious setbacks in the agenda for realizing social progress, including for women’s liberation and on gay, lesbian, bisexual and transgender rights. For a more detailed look at these issues, see Leslie Feinberg’s “Progress and regression: Sex and gender in 1930s USSR.” (workers.org/lavender-red)

But despite the early hardships and setbacks, the first workers’ state survived. It eventually was able to recover enough to begin a plan for economic growth.

By the 1930s, when world capitalism was in a spectacular decline after the stock market crash of 1929, the superiority of socialist planning over capitalist anarchy of production was obvious, and skilled workers from around the world were attracted to the USSR. In Western Europe and the U.S., factories closed down and farmers lost their land to the banks in the depths of the Great Depression. At the same time, the Soviet Union was able to industrialize at a speed never seen before.

When the USSR was finally overturned in 1991, all the old reactionary features of capitalism resurfaced. The counter-revolution devastated the working class, taking its greatest toll on women and LGBTQ people, as well as on the many nationalities that had been conquered by the Russian czarist regime and held as semicolonies before the revolution.

Next: Impact of dire material conditions on the party and state.