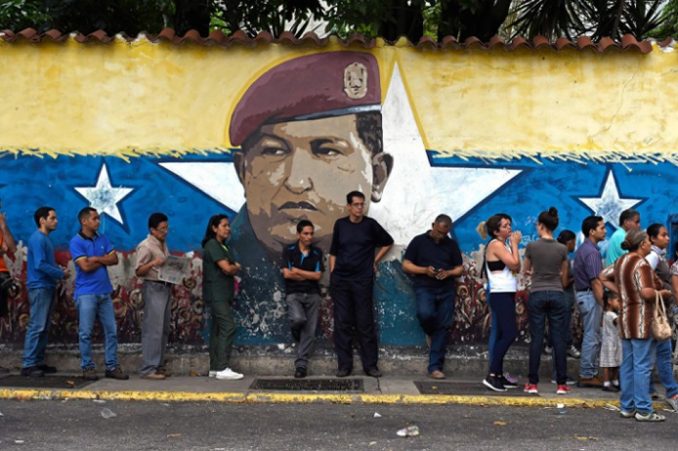 Washington, Wall Street, the CIA and the U.S. corporate media got — for them — an unpleasant blow on Oct. 15 in Venezuela. The Venezuelan workers and farmers who support the Socialist Party government of President Nicolás Maduro voted that party into governmental office in 17 of the 23 states — with one still too close to call.

In the total vote, Maduro’s PSUV (United Socialist Party of Venezuela) came up with 54 percent. This is a strong reversal from the December 2015 parliamentary vote that gave the opposition — the pro-imperialist opposition — the majority in the legislature. That result threatened Chavista rule in the country.

Since that vote, U.S. imperialism, with the support of the Spanish state and other NATO powers, has stepped up its efforts to strangle Venezuela economically while sabotaging it and supporting violence by the opposition.

The Chavista government hung on and has now come out on top in two elections. First was the success of the elections to the Participant Assembly on July 30, which connected the masses in the country with the opportunity to influence changes in the governmental system. Next were these regional elections, which saw over 61 percent participation and brought the Chavistas a clear majority.

Despite these good results for the revolutionary movement in Venezuela, there is still a threat from U.S. imperialism and its regional client regimes. Three of the Venezuelan states on the Colombian border were won by the opposition, known as the MUD (Democratic Unity Roundtable). Colombia is the South American regime most tightly allied with imperialism and most determined to oust the Maduro government.

Here in the U.S., we have to assume that the corporate media will repeat the lies of the Republicans and Democrats maligning the legitimacy of the vote.

But there is an important difference in voting in Venezuela and voting in the U.S. The Venezuelan Chavista government encourages the participation of youth, women and poor voters and those from formerly oppressed sections of the population. The U.S. and its component states make it difficult for Black and Latinx people to register and vote, and don’t even give time off for workers to vote. All incarcerated people in the U.S. are kept away from voting, and many prisoners are denied the right to vote even after they are freed. Meanwhile, the U.S. electoral college and senatorial system biases voting toward rural and wealthier areas.

So any slander against Venezuelan voting from U.S. politicians is just that — hypocritical slander.

After two straight electoral triumphs for Chavism, Venezuelans can be encouraged. So can those of us in the U.S. who support sovereignty for that South American country and who look forward to progress toward socialism. But we must stay on guard, ready to mobilize to prevent further interference from the U.S. against the Venezuelan people and the government they choose.