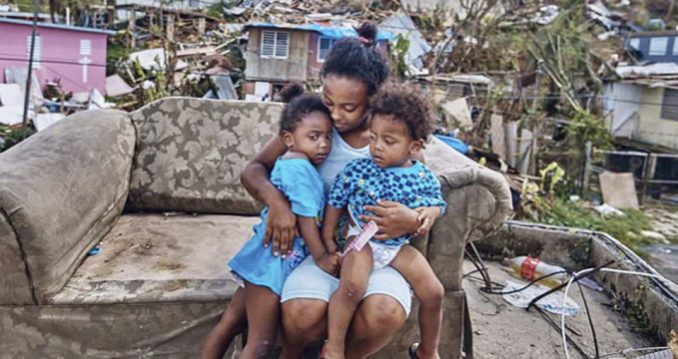 What is happening now in Puerto Rico can only be described as genocide — plain and simple!

Hurricanes Irma and Maria have uncovered Puerto Rican reality for the world to see: the murderous and obscene cruelty of naked capitalism mirrored in the subordination of a populated territory, a colony of the United States, where without mercy the bloodiest system oppresses a desperate population devoid of material resources.

Just as X-rays discover what soft tissues hide, the hurricanes have shown the terrible conditions of thousands of families, who live in poverty and survive in unsafe housing that lines the stunning mountain sides, all covered by the luscious greenery of this tropical region. Now, with the vegetation blown down, the forgotten and desperate have surfaced, giving evidence that the system has failed to protect its people.

And if Maria flattened the vegetation, it has been the “recovery” plans from both the U.S. government and its subservient Puerto Rican administration that have inflicted the most devastation. The motto “Actions speak louder than words” surely summarizes the situation.

One might even think that this is a well-executed plan to destroy Puerto Rico as we know it, decimate its population and impose a foreign agenda to benefit capital, while disregarding the voices of the residents. The plan “dismantles” and restructures Puerto Rico for the benefit of a few — capitalists.

Let’s take a look at one of the areas to illustrate this.

Energy sector up for grabs

Of all the sectors, electricity is the most crucial. In this tropical island where ventilation and refrigeration play a determinant role in keeping food and medicines at a safe temperature, the loss of electricity affects everybody. No industries can function without it and no hospitals. Already, many people have died for lack of electricity to power life-saving devices. Lack of electricity also diminishes the capacity for maintenance and delivery of potable water.

Although some electric power has been restored by using generators, there are too few to sustain needed power and not everyone has access. They run mostly on diesel, which in turn is more expensive and depends on shipping from the U.S.

After the storm, the damage from fallen power towers and wires was prevalent. But not only that. The lack of materials in inventory exposed the failed plan that the U.S. firm Alix Partner proposed — a plan for which the national electric utility, PREPA, contracted to pay $45 million.

This plan was to “restructure” the electric power agency in order to pay its share of the public debt, which is $9 billion. This meant keeping a minimum of inventory — from fuel to posts — to keep the budget down. This “saving” proved to be not only a mistake, but a criminal action against the people of Puerto Rico.

The electrical workers’ union, UTIER, had repeatedly criticized this move. UTIER said that since Puerto Rico is an island it could only obtain necessary materials through shipping, which storms could delay. Exactly.

Even before the enactment of the PROMESA law that imposed a Fiscal Control Board to make Puerto Ricans pay the illegitimate debt of $74 billion, there were attempts to privatize PREPA. PROMESA then made it one of its goals.

Now, after Maria hit the island, Gov. Ricardo Roselló, under the direction of the U.S. Army Corps of Engineers — which was imposed on Puerto Rico to restore the energy sector — has contracted several U.S. firms to privatize PREPA despite the UTIER workers’ firm opposition.

The government refuses to turn on the Palo Seco plant on the north coast, near San Juan, hoping the people’s desperation will force them to accept privatization. The Palo Seco plant could provide the necessary stabilization of the system in that area while the rest is repaired.

In this area is Rio Piedras Medical Center, the main medical center, where the most severe cases from all the archipelago are attended. Since electricity was first reconnected after Maria, the Medical Center has lost electric power four times due to instability.

Ricardo Santos, ex-president of UTIER, has exposed these interruptions in every TV, radio and even live Facebook program possible, and proposed a plan that could avoid the service interruptions. His and UTIER’s solution is to turn on the Palo Seco plant, which was turned off before Irma and Maria with the phony excuse that it could not withstand a 40-mph wind.

The plant is standing and operational. According to Santos, the governor announced a contract with Weston Solutions to install a diesel generator for the Palo Seco region that would produce 50 megawatts at the cost of $35 million in rent for six months. Instead, Santos stated, two units of the Palo Seco plant could provide three times as much power, 150 MW, at a much lower cost.

Another criminal action has been the refusal of the government to accept the services of the American Public Power Association based in Washington, D.C. An Oct. 6 article posted on eenews.net reports the APPA said: “Instead of activating a mutual aid arrangement that might have speeded up recovery time, the utility turned to Whitefish Energy Holdings, a small contractor based in Montana, to coordinate outside help. The utility has given no explanation for that decision.”

In the meantime, the “help” from the U.S., the infamous Federal Emergency Management Agency, the military, police and contractors, is not providing what is needed to the poorest people located at remote places in the islands.

Due to the lack of communication, including TV, radio and internet, the majority of the people in Puerto Rico have no knowledge of what is happening beyond their neighborhood. Some suspect that the U.S. and Puerto Rican governments have purposely delayed any solution to improve communication so they can impose rule changes that otherwise would have been unacceptable and protested by the people and the progressive organizations.

One of these changes is that the governor issued an executive order suspending all collective bargaining contracts until Oct. 28. He gave no reason!

Rosa Clemente, a Boricua community organizer, journalist and hip-hop performer living in New York City, went to Puerto Rico to cover the situation, to make sure that a progressive Boricua sent reports from the island.

On Oct. 15, Clemente went to the luxurious Sheraton Hotel across from the Convention Center where the government set up the Command Center, to record and transmit from the lobby what was happening.

What she showed was outrageous: Personnel from FEMA, the U.S. military and contractors were having the time of their lives, drinking, dancing, eating wonderful food and listening to a DJ play the latest musical hits. While people starved in the mountains, died of thirst and lack of care, struggled to repair what little remained of their houses, the people allegedly sent to help them were instead frolicking in an air-conditioned hotel.

While this article has focused on electricity, we must at least mention the severity of other problems.

In terms of health, the possibility of water-borne and mosquito-borne illnesses is a reality. Already people have died from leptospirosis, an otherwise benign infection caused by mice and other animals’ urine. Massive flooding where animal carcasses abound, together with the lack of clean water for proper hygiene, has created this latest health concern.

The U.S. government sent a “floating hospital,” the USS Comfort, with 900 personnel and sophisticated health machinery and surgical facilities. It can see 1,000 patients a day. But since Oct. 3, when it arrived off the coast of San Juan, fewer than 100 patients have been seen.

Patients must first be seen in the Rio Piedras Medical Center, where they wait for hours — or days — to be referred to the ship and cared for there.

Bureaucracy also extends to the “aid” from FEMA. In a Spanish-speaking country, it is required that a person fill out a long application in English. FEMA says people can apply by internet or phone. Of course, both internet and phone are almost nonexistent!

Another crime we must mention is the toxic water lying in “superfund” sites, that is, heavily polluted water. According to a CNN report, this water is being distributed to the people.

It has been 119 years since the United States invasion of Puerto Rico. Its exploitation has destroyed the country’s means of self-sustainment, its economy. It has isolated Puerto Rico from the world, imposing a foreign monetary system and the most expensive shipping as its exclusive way of trading.

After poisoning the water, air and soil with military bombing tests and pharmaceutical and petrochemical factories, after the repression of the Puerto Rican independence movement, after the forced sterilization of women, after the forced migration and separation of families — after these and many more crimes, the United States has an obligation to the Puerto Rican people. It is not charity, not even “aid.” It is payback! It is REPARATIONS!