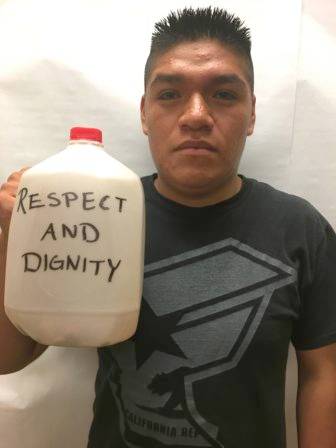 The New York Civil Liberties Union argued before the state Supreme Court on July 20 in favor of labor rights for hundreds of mostly Latinx migrant farmworkers in New York state who milk cows, till fields and thresh wheat. The lawsuit seeks to strike down an 80-year-old state law forbidding agricultural workers from organizing collectively, because that law violates the state constitution, which permits all workers to organize. The 1937 state law is based on the federal National Labor Relations Act, enacted in 1935, when Southern politicians refused for racist reasons to vote for the act unless it exempted agricultural and domestic workers. A majority of those workers in the South were African-American.

The suit, initiated in May 2016, was brought on behalf of dairy worker Crispin Hernandez, the Workers’ Center of Central New York and the Workers Justice Center of New York. The state has refused to defend the case, though the New York Farm Bureau, an agricultural industry lobby, opposes it.

A report issued in June by the WCCNY and WJCNY titled “Milked” documents abuses like wage theft and dangerous working conditions for area farmworkers. Not only have dairy workers been trampled and gored, but they are forced to live in substandard housing supplied by the bosses. If they dare speak up, they face firing. Donna Lieberman, NYCLU executive director, told the New York Times, “There is no way we … can abide continuing this grave, grave, grave injustice.” (July 20)

The San Francisco Labor Council unanimously adopted a resolution on July 10 denouncing legislative attacks on the Farm Labor Organizing Committee and immigrant farmworkers’ rights in North Carolina. After delineating the many ways farmworkers are discriminated against in federal and state laws, the resolution quoted FLOC President Baldemar Velasquez: “Politicians that are also growers shouldn’t pass self-serving laws simply because they don’t want their workers to unionize. With the continuation of Jim Crow-era laws that aim to stop a now almost entirely Latino workforce from organizing, this is an affront to freedom of association and smacks of racism.”

Calling for widespread labor and community solidarity in this struggle, the resolution quoted Saladin Muhammad, of Black Workers for Justice and the Southern Workers Assembly: “This must become a national battlefront for all workers, organized, unorganized and unemployed in our communities.” The council called on N.C. Gov. Roy Cooper to veto the bill “as part of supporting labor’s ‘national battlefront’ to organize the South and regain the power of labor everywhere in this country.” (See related article on protest Gov. Cooper’s bill signing.)

Fighting for back pay in N.J.

New Jersey Gov. Chris Christie called a government shutdown on July 2, using an austerity maneuver when the state budget wasn’t passed by July 1. With between 30,000 and 35,000 members of the Communications Workers affected by the lockout, CWA swung into action. After a press conference denouncing the shutdown, CWA called picket lines outside legislators’ offices on July 5 and 6 demanding pay for days they weren’t allowed to work. But before the lines went up, Christie caved. He had been photographed sunning himself at empty Island Beach State Park, shut down under his order, and then exposed as lying about it. After filing a grievance, CWA held a loud rally on July 13 outside the statehouse demanding back pay. The state Senate promptly passed the bill, the state Assembly agreed to pass a similar bill, and Christie even promised to sign it. (Labor Notes, July 20) Nothing like exercising union muscle when state power runs amok!

“Working families are enduring enough financial pain as a result of the dysfunction in Washington,” said 32BJ SEIU Vice President Jaime Contreras. “MWAA contractors should be functioning at a higher level than Congress by being part of the solution, not the problem.” (seiu32bj.org, July 12)